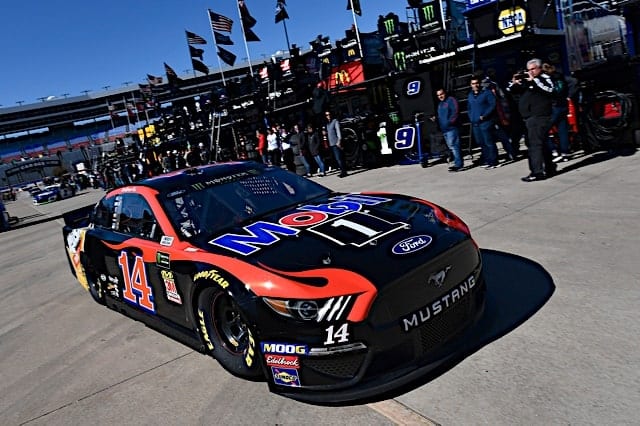 Bowyer put together the 10 fastest consecutive laps in first practice. His average speed was 186.702 mph, and SHR teammate Kevin Harvick was second with a speed of 186.131 mph.

Chase Elliott was slowest among the playoff drivers, placing 26th at 185.293 mph. John Hunter Nemechek, who is making his Cup debut in the No. 36 Front Row Motorsports Ford in place of Matt Tifft was 29th fastest (184.508 mph) in his first career Cup Series practice.

A total of 29 cars turned at least 10 consecutive laps in this session. Once again, Bowyer and Harvick held the two fastest speeds. Bowyer averaged 187.267 mph and Harvick 186.889 mph.

Joey Logano was the slowest playoff driver in second practice. He was 21st with a speed of 186.728 mph.

No incidents took place in the first practice. The second practice of the afternoon was halted for four minutes when Timmy Hill stalled at the exit of pit road with 30 minutes to go in the session. He would require a push back around before practice resumed.

Cup Series qualifying is tomorrow (Noc at 7:05 p.m. ET on CNBC and the NBC Sports App.