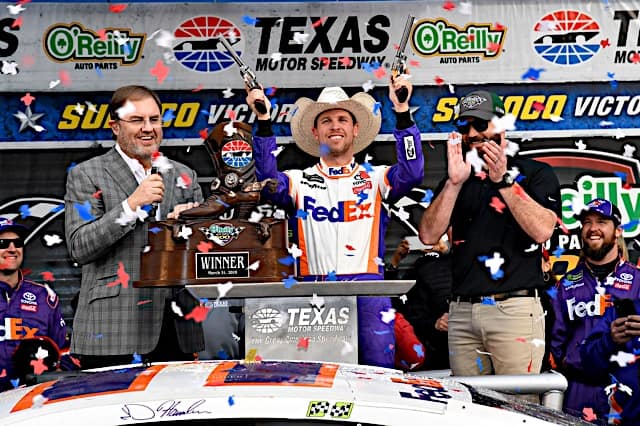 Everything is bigger in Texas, and that includes the Monster Energy NASCAR Cup Series playoff race at Texas Motor Speedway this weekend. The AAA Texas 500 will air on NBCSN on Sunday, Nov. 3, at 3 p.m. EST.

Texas is a 1.5-mile oval, but it’s not quite the cookie cutter that other intermediate tracks are anymore. Two years ago, the track was repaved and reconfigured, reducing the banking in turns 1 and 2 from 24 degrees — like turns 3 and 4 still are — to 20 degrees. This move greatly increased the difficulty of passing at the track. Keep in mind how much tougher it is to pass at Texas when filling out your daily fantasy lineup.

That being said, Denny Hamlin had two pit road penalties in the spring race this year and came back to win. So if a driver has a dominant car, the passing difficulties aren’t as big of a hindrance.

This race is the second of the Round of 8, as eight drivers make their push for the Championship 4 at Homestead-Miami Speedway. Playoff races tend to be dominated by playoff drivers, and the past three years, someone in the Round of 8 has won to punch their ticket for Homestead. So don’t look for any huge upsets this weekend.

Harvick has always been good at Texas — hence the top-10 average finish — but of late, he’s been been the guy to beat there. Harvick’s two Texas wins came in the fall race each of the past two years, and in last year’s win, he dominated, leading 177 of the 337 laps.

The 2014 Cup champion has finished in the top 10 in 10 straight Texas races, and in that time frame, his average finish is 3.9 — the best among all active drivers. Harvick’s average starting position at the track is 16.2, which means he’s usually good for five to six positions-gained points. Harvick may need to win to advance in order to the Championship 4, and given his history of clutch playoff performances, he’s a must-have in your lineup.

Don’t believe anything you hear saying Hamlin won’t race this weekend. He has a torn labrum in his left shoulder and will get surgery at the end of the season, according to AP, but he will still compete and still be fast. As mentioned above, Hamlin is the most recent Texas winner, coming back from two pit road penalties to win in the spring. His three wins are tied for second most among active drivers.

Hamlin has said all year that his team has improved in the second visit to each track, and the stats back it up with three of his five 2019 wins coming in the second race at those tracks. Should Hamlin continue that trend at Texas, he should dominate given that he already won there this year.

The Virginia native is the most recent intermediate track winner, coming at Kansas Speedway, and he enters this weekend with four straight top fives. Hamlin is having a career year, so keep on putting him in your lineup.

Jones isn’t the first driver that comes to mind when you think of Texas, but he’s pretty consistent. His average finish is second best all-time at the track. He struggled in his first two trips to the Lone Star State before rallying off four straight top 10s.

The Michigan native enters this weekend with a streak of three straight fourth-place finishes at Texas — any numbers person would think that number would extend to four straight. Jones dominated Texas in the NASCAR Xfinity Series, winning three times, so it’s only a matter of time before that will translate to the Cup Series. Jones probably won’t win this weekend, but put him in your lineup for his consistency.

Getting the greatest driver in the history of Texas Motor Speedway at this low of a value is a steal. Johnson has the most wins, top fives, top 10s and laps led in TMS history. He has the best average finish among active drivers with eight or more starts at the track, too.

Yes, Johnson is not as good this year as he has been in the past, but he still finished fifth in the spring Texas race, leading 60 laps in the process. Johnson has gotten better in the late part of this season, finishing in the top 10 in four of the past six races. Expect another top 10 run plus the potential for major upside with Johnson in your lineup this Sunday.

It doesn’t matter the track or his numbers, when you see DiBenedetto in the bargain tier, you grab him. DiBenedetto has a best finish of 16th at Texas, but that came in Spring 2018 when he was with Go Fas Racing, which is a remarkable day for that team. Leavine Family Racing is a more competitive team, hence DiBenedetto’s three top fives and seven top 10s on the year.

Obviously, those results all came on short tracks and road courses, but LFR has still gotten quite a bit better than it was in its first trip to Texas this year, when the team finished 26th. In the most recent mile-and-a-half race at Kansas, DiBenedetto finished 15th. DiBenedetto isn’t going to dominate this weekend, but he should get a decent finish while allowing you to spend more on elite tier drivers.