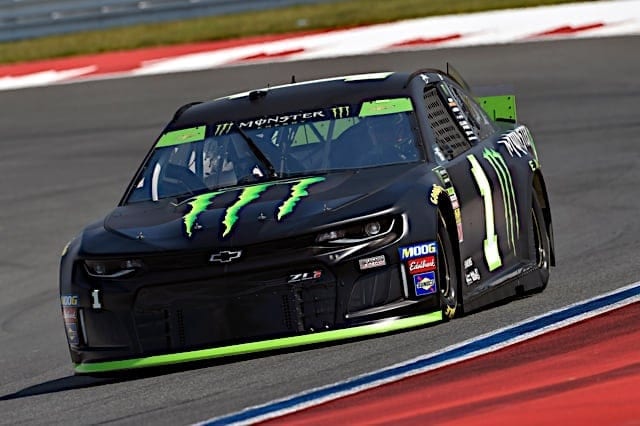 Kurt Busch will return as the driver of the No. 1 Chevrolet for Chip Ganassi Racing in 2020, announced at Texas Motor Speedway on Saturday (Nov. 2). Primary sponsor and outgoing NASCAR Cup Series title sponsor Monster Energy will also remain the primary sponsor. Both Busch and Monster Energy announced it is a multi-year extension.

“Chip made me an offer that I couldn’t refuse!” Busch said in a press release. “For me personally, it is the fun and refreshing atmosphere working with Matt McCall and all the team here at Chip Ganassi Racing. All signs pointed toward, ’let’s keep going; let’s keep winning.’ It has also been the fans, continuing to work with Monster Energy, the chance to be part of the Next Gen car introduction in 2021, along with building on our successes in 2019 that together makes it an easy decision to continue here at Chip Ganassi Racing.”

“Monster has been with me for nearly a decade and they are so much fun to work with; it is just a natural fit. The outreach of fans to me this year has been inspiring to hear all of them encourage me to keep racing. Additionally I have enjoyed sending veterans and active-duty military to the races this year through our relationship with VetTix.org. This is a chance for me to continue being part of something that I have really enjoyed.”

Busch was rumored to return to Chip Ganassi Racing throughout the season but it is now official. Adam Stern reported the extension is for two years.

'@KurtBusch has signed a two-year extension to continue with @CGRTeams in the NASCAR Cup Series.

➖ @MonsterEnergy has also signed an expanded renewal with the team, increasing its paint scheme count.

?Mitch Covington: "NASCAR is a major part of who we are at Monster Energy." pic.twitter.com/1H9LQ4qzwr

Busch made the playoffs this season with his victory at Kentucky Speedway in July. This season is his first with Chip Ganassi Racing.

“I must say that I have been nothing but impressed with him both in and outside of the car,” Ganassi said. “He has such great instincts behind the wheel, has been tremendous with all of our partners and everyone on the shop floor feeds off his intensity on the track and his enthusiasm off it.”

Busch has 31 career Cup Series wins and won the 2004 Cup Series championship. The 41-year-old from Las Vegas, Nevada, was eliminated from the playoffs after the first round, the Round of 16.

I really appreciate the evolution of Kurt Busch over the course of his career. The guy just seems to really support those he works with and his leadership and all in approach appears to be infectious to his team. I’m glad he is sticking around and I think this will definitely elevate CGR and Kyle Larson to the next level.

Kurt has kept the #1 in the top 10 most of the year. Much better results than previous years.

I totally agree. I used to hate Kurt in his early days, he was definitely my least favorite driver. Now, I really appreciate his passion and dedication and his drastically improved behavior.

It hasn’t worked on his brother. And doubtlessly never will.

Agreed, Kyle is talented in every department except maturity.

Agreed also. Kurt’s problem was always that he behaved a bit psychotically and had a short fuse but has been able to calm down and act rationally over the past 10+ years. Kyle is just arrogant until something goes wrong and then he acts like a pouty four year old. That’s more of a personality defect that I don’t see him changing.

I’ll always be fan of Kyle Busch until he hangs up his helmet.Remember “good girls like bad boys.”

Didn’t the media write off Kurt and Monster in NASCAR last year? Well look at him now?