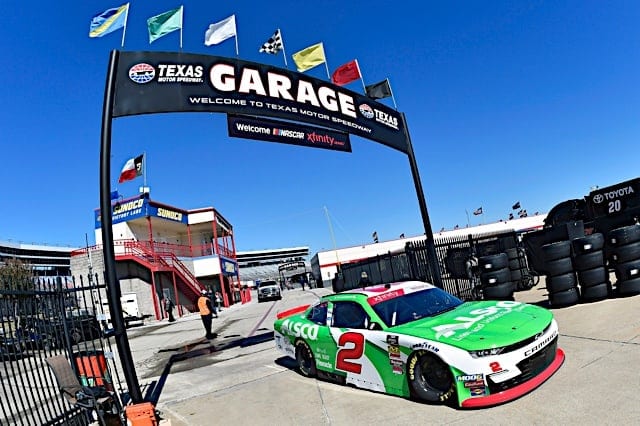 Tyler Reddick won the pole for the 2019 O’Reilly Auto Parts 300. He will lead the NASCAR Xfinity Series field to green at Texas Motor Speedway later tonight (Nov. 2). It is his fourth pole of this year and sixth pole in his Xfinity Series career.

Reddick won the pole with the fastest speed of 190.705 mph. As one of the six Xfinity Series playoff contenders, Reddick would advance to the Championship 4 with a victory at the 1.5-mile track.

Starting second will be Harrison Burton. He posted the second-fastest lap, ahead of his Joe Gibbs Racing teammate Christopher Bell.

Rounding out the top five were Cole Custer and Chase Briscoe. Due to inspection issues with his No. 98 Ford, Briscoe will lose 30 minutes of practice next week when the series travels to ISM Raceway.

Justin Haley wrecked his primary No. 11 Kaulig Racing Chevrolet and will go to a backup.

The No. 11 team will have a mountain of work to do before race time. pic.twitter.com/nloJvvOsxU

Thirty-eight drivers are entered for the O’Reilly Auto Parts 300, so no drivers failed to qualify for the race.