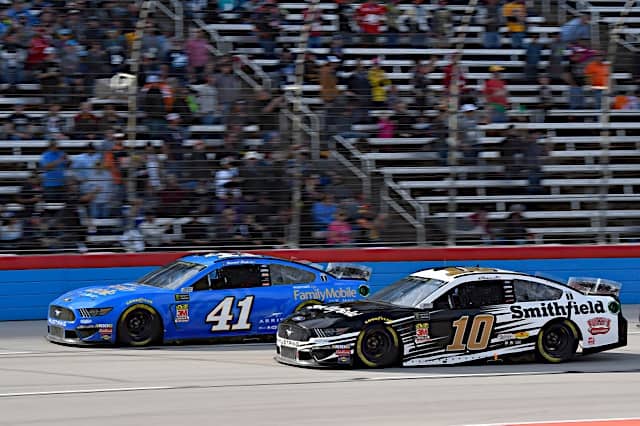 Kevin Harvick dominated the AAA Texas 500 and led 119 laps en route to his third straight fall victory at Texas Motor Speedway. But he didn’t get the win without a fight from his teammates.

For the second time in their existence (Michigan – 2018), Stewart-Haas Racing scored a 1-2-3 finish. Aric Almirola and Daniel Suarez both posted season-best finishes of second and third, respectively on a night where SHR as a whole led 242 of 334 laps.

“I am really proud of the effort by everybody at Stewart-Haas Racing, Roush Yates Engines and Ford Motor Company,” Almirola said with a smile on his face. “Our cars were really, really good from the time we unloaded here and we all came with a little something different, just trying to learn and get ahead for next year. I think we learned some stuff.”

In what has been a dismal playoffs for Almirola, with the exception of a fourth-place run at Talladega Superspeedway a few weeks ago, the runner-up finish was just the second time he’s finished inside the top 10 since Daytona International Speedway in July.

“We have had such a bad run of luck the last two months and it is so nice to come here and just execute all night and have a fast car, lead laps and win a stage and run up front,” Almirola continued. “We had a great night on pit road. I did my part on restarts and on and off pit road and just an all-around solid night. We can build on that.”

Despite leading 62 laps, Almirola just didn’t have enough speed to compete for the victory as the laps wound down.

“For a little while I thought we had a car capable of winning,” he explained. “When Harvick got a good restart there and was able to keep pace with us I knew I was in trouble. His car was a good bit faster than ours in clean air.”

Meanwhile, Suarez matched the result he posted at Texas in the spring, and the third-place run marks the end of a three-race stretch of finishing outside the top 30.

“That was a very solid night and I am very happy with the performance and speed that we brought from the shop,” Suarez explained after the race. “Everyone back at the shop did a great job. We knew we would be fast here. We had a solid performance here last time. We did a good job. We had good execution and a good clean day.

Though he didn’t manage to finish inside the top 10, Clint Bowyer did contribute to what was a dominant day for SHR. He led 36 laps toward the end of stage one and ultimately ended up with an 11th-place run.

This doesn’t happen very often. I remember Hendricks Motorsports & Joe Gibbs Racing doing it.
How about Roush Racing or RCR? DEI had some 1-2 finishes.

Stewart Haas broke the dry streak in 2018 at Michigan with Bowyer/Harvick/Busch in top 3.