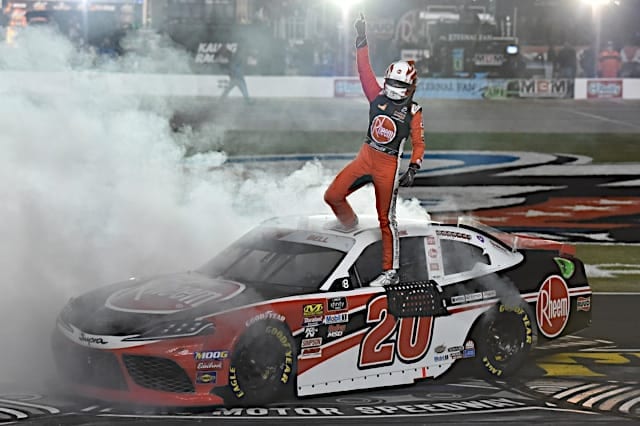 For the fourth time this NASCAR Xfinity Series season, Christopher Bell swept both stages and the race itself. He won the 2019 O’Reilly Auto Parts 300 at Texas Motor Speedway on Saturday (Nov. 3), his eighth win this season and 16th career Xfinity Series victory.

Additionally, this was his first victory at TMS. Bell is from Norman, Oklahoma, making the 1.5-mile track in Fort Worth is his home NASCAR track.

“That was pretty special to win here at Texas [Motor Speedway],” he told NBC Sports. “I got a lot of family here. I normally give this (the checkered flag) away, but I saved this one for my nephew.”

The win was convincing, crossing the finish line by 5.56 seconds over Ross Chastain. With this win, Bell clinched his Championship 4 berth and will race for the championship at Homestead-Miami Speedway.

“I like where we’re at,” Bell said regarding his odds of winning the championship. “Earlier in the year, we were going to some of these race tracks and I felt really good. But we couldn’t compete with some of our competitors. Right now, we can be a little bit off and I’m still right there with them. Once we get this thing driving good, we’re really good.”

The race was the second of three races in the Xfinity Series Round of 8, and the pressure certainly was on the playoff drivers.

During the second stage, even with two cautions, playoff drivers raced upfront. After Bell who won the stage, Allgaier was in second, Reddick in third, Briscoe in fifth, Noah Gragson in sixth, Cindric in seventh, Custer was in eighth.

When the third and final stage began, Cindric grabbed the lead and led until a caution on lap 129.

On lap 129, Briscoe had a flat right rear tired, made contact with the wall, and brought out the sixth caution of the race.

The restart brought forth more tight racing and incidents to several playoff drivers. After another restart on lap 144, Chastain took the lead, seeking to win another race for the No. 10 Kaulig Racing team.

But on lap 151, tight racing cost Gragson. He tried to squeeze his No. 9 JR Motorsports Chevrolet between Harrison Burton and Jeb Burton. He made contact with Burton and wrecked his car for his first DNF of the season.

Noah Gragson spins and becomes the second driver of the day to have damage as the splitter digs into the grass.

He'll likely have to win at @ISMRaceway next week to make the #Championship. #NASCARPlayoffs pic.twitter.com/I1C0vOPY6i

Gragson is likely in a must win situation in the final race of the Round of 8 at ISM Raceway.

Chastain continued to lead, but on lap 162, calamity struck a member of the Xfinity Series Big 3.

Another look – @TylerReddick will be on the defensive heading into @ISMRaceway. pic.twitter.com/qopWfxV8Ta

Reddick still has a 36 point margin above the Round of 8 cut line.

Briscoe on the other hand continued to struggle. After his involvement in the lap 162 incident, his Stewart-Haas Racing team opted to leave him out on the race track. With 25 to go, his right front tire finally disintegrated, but NASCAR didn’t throw a caution.

Briscoe limped his No. 98 Ford to a 22nd place finish but is 18 points below the Round of 8 cut line.

Finally, Bell regained the lead on the lap 170 restart and he never looked back. In hindsight, he admitted Reddick arguably was his strongest competitor.

“We were really competitive, us and the No. 2 (Tyler Reddick), especially early on. Then I started having brake problems. I then just wasn’t as good. I worked hard to keep the car underneath me, it was really loose. The red flag helped me, my brakes came back, we got this thing tuned up and were able to drive away.”

Bell clinched his Championship 4 berth. Although Custer has not mathematically clinched his berth, he is 52 points above the cut line. Besides Reddick, Allgaier joins the Big 3 as the four drivers positioned to compete for the championship as the series heads to ISM Raceway for its final race in the Round of 8.

And if, by some freakish turn of events, he doesn’t win the title will eople be finally willing to admit that a ‘playoff’ isn’t the right way to crown a champion in auto racing?

Since no one was there to see it did it really happen?

Maybe someone put a recorder close to the track. Otherwise it’s just the word of family and friends.