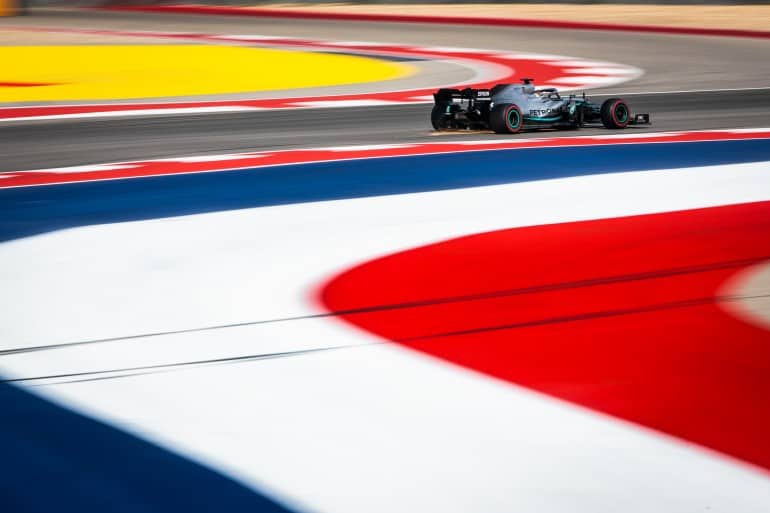 Lewis Hamilton drives away from the field (credit: FIA Images)

Lewis Hamilton clinched the 2019 World Championship at Circuit of the Americas on Sunday (Nov. 3) by finishing second. The Briton now has six titles to his name and is one away from tying Michael Schumacher.

There are parking spaces

And there is this parking space ⬇️ ? ?#USGP ?? #F1 @LewisHamilton pic.twitter.com/2FtgUoIzyc

Hamilton used a contrarian strategy for the race, and one that almost paid off for the win, but his teammate and pole-sitter Valtteri Bottas passed him with four laps to go and sped away to the victory, his fourth of the year.

Max Verstappen took the third spot and looked like he might just pass Hamilton during the final two laps, but Kevin Magnussen’s trip into the sand trap at turn one brought out double-yellow flags to curtail his effort of using DRS.

Charles Leclerc managed a respectable finish of fourth but was never in contention. Alexander Albon recovered from a traumatized wing on the first lap to earn fifth, continuing his stellar run in the second half of the season since joining Red Bull from Toro Rosso.

Bottas got away clean at the start and by the time he had hit turn two was already eking out ahead of the field. The two Ferraris looked like they had made a good start of the race but they could not manage their pace and were soon being challenged on all sides.

Hamilton, who started fifth, smoothly moved into the third position by turn three. The surprising run came from the McLarens, with Lando Norris sliding into fifth and Carlos Sainz in seventh. Daniel Ricciardo, whose season has been nothing less than a mess, managed to put his car in sixth. Ricciardo wound up battling Norris for the duration of the race, making for one possibly the most entertaining battle for its entirety.

Albon banged up his front wing on the kerb of turn one and pitted, forcing him to battle from the back early on. After a spirited opening lap, the drivers slotted into a common race parade, with little passing other than Albon surging through the field.

The track, however, saw fit to make itself a presence. Track management already announced that they would be shutting COTA down after the race to give it extensive surface repairs because of the bumps that have emerged. The track’s surface became an issue when it was seen as the likely culprit for Sebastian Vettel snapping his rear suspension on lap 18, causing his retirement.

For Ferrari, this race marked another forgettable endeavor. Their season, one of such promise, unraveled under these expectations and the team has failed to show consistency – dominating one weekend while falling apart the next. This race was baffling –for as much speed as they had shown, their cars looked remarkably off, unable to get marry their car to the track and falling off the pace early.

Wholesale pit stops began on lap 19. Verstappen pitstop brought in Bottas, a move that showed that Bottas was racing Verstappen more than he was his teammate at the time. With that move, Hamilton was able to move into the lead, a position he then held until Bottas passed him. But Bottas, like Verstappen, was using a two-stop strategy, one that became the prominent tactic of the day.

The race at the front of the field, between Bottas, Hamilton and Verstappen was complemented by those racing from sixth through tenth. The McLarens fought with Ricciardo and Pierre Gasly throughout the race, though Gasly suffered a hydraulic failure late and could not see the fight through to the end.

Ricciardo eventually prevailed and was able to take sixth with Norris placing just behind him. Sainz crossed the line behind his young teammate in eighth with the second Renault of Nico Hulkenberg taking ninth. Sergio Perez, who started the race from pitlane because of his failure to stop on the scale in FP2, finished out the points-paying positions in 10th.

For the final 10 laps, it looked like Hamilton was going to make his one-stop strategy work and earn the win to cement his title in dominant fashion. He managed to keep Bottas in arrears and looked like he had enough pace and ability to maintain that running order, but Bottas used fresher medium compound tyres to eke his way continually forward and then use a DRS zone to pass the eventual world champion.

After zero wins in 2018, Bottas looks to have solidified his position with Mercedes for next year with this win, as this has become his best statistical season and he has placed second in the drivers championship.

With both the drivers and constructors titles decided, it would seem like there’s no reason for the season to continue. But there are still two races to go, and the teams will have varied ideas for how to race. For Mercedes, they’ve got nothing to lose and no pressure. For midfield teams like Renault, Toro Rosso and Racing Point, there are still positions to be gained or lost in the constructors standings.

The next race is the Brazilian Grand Prix on Nov. 17.