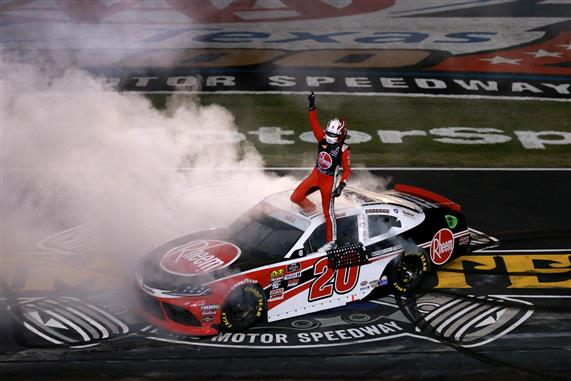 Boy, did it ever.

Harvick officially caught up to his boss on Sunday (Nov. 3) with his 49th MENCS victory, 26 of those coming with SHR. He did it in commanding fashion, leading 73 of the final 80 laps while cruising to a 1.594-second win over teammate Aric Almirola. For the third straight year, he emerged victorious in a Texas Motor Speedway fall race, punching his ticket to the Championship 4 at Homestead-Miami Speedway.

It’s the fifth time in six years Harvick’s made the cut, guaranteeing another top four points finish (equaling the number he had with RCR). But this push through the playoffs might also be his most impressive. 2019 has been a year in which Joe Gibbs Racing and Team Penske, not SHR, ran circles around the competition. Harvick didn’t win a race until Loudon in July; he entered this weekend 14 points below the cutline.

But none of that mattered for a team whose confidence and basic execution kept boosted them when speed was difficult to come by. Harvick, without a pit road speeding penalty for over a year now, combined with crew chief Rodney Childers to gut this year out as a bit of an underdog. They focused on their better tracks, like Texas, and maximized their opportunities in races JGR and Penske had a bit of an off day.

The end result? Four wins, a series-best six poles, and a chance at a second Cup title together – leaving Harvick just one behind buddy Stewart.

“He’s so laid back and understands how the peaks and valleys go of this particular sport,” Harvick said of his car owner. “I’m glad he’s here on the night that we were able to both be 49s.  I guess that’s pretty cool.”

Now, the goal becomes the big 5-0. Could it happen at Homestead in the finale? He’ll be an underdog to the JGR cars and perhaps reigning champ Joey Logano as the Championship 4 looks to be an exact replica of 2018. But this team doesn’t listen to the outside noise. Assuming a lower profile might be the best medicine after a rocky Round of 8 last year in which NASCAR penalized the team for post-race inspection failure after their Texas win.

“To be able to knock it out like they did today,” Stewart said of the No. 4 team, “And do it in such a dominant fashion, that’s the kind of day that sets a statement to the competition that we feel like our team is peaking at the right time.” – Tom Bowles

LUNKENHEIMER: INSIDE THE SHR 1-2-3 FINISH

After having to win the final race in the Round of 8 last year in order to make the Championship 4 at Homestead, Christopher Bell wanted a different route to the championship race in 2019. He didn’t take long to find a new path, winning on Saturday (Nov. 2) at Texas Motor Speedway to lock in a spot one week earlier.

Bell was the dominant car throughout the race, fighting through many battles for the lead with pole sitter Tyler Reddick. But Reddick got stuck in traffic during the final stage, then wrecked while racing hard with Chase Briscoe to take himself out of contention.

That left Bell in the driver’s seat with fresh tires and a fast car. On a late-race restart, the No. 20 was able to scoot by Ross Chastain, who was driving for Kaulig Racing, en route to his eighth victory of the season.

The win is Bell’s 16th triumph in 72 career Xfinity starts. For those of you that aren’t the best at math, let me do that win percentage for you: it’s a sizzling 22.2. Again, 22.2 percent. In nearly one out of every four races, Bell ends up on top.

Of course, those two still have to qualify for the Championship 4. Bu come the penultimate race of the season next week at ISM Raceway, Custer, Reddick and Justin Allgaier just need respectable days in order to make the final cut.

Via his win at Texas, Bell is locked for Miami. Custer ranks second, 52 points to the good. Though wrecking out on Saturday, Reddick sits third, 36 points above the cutline, while Allgaier is fourth, +18. Chase Briscoe is the first driver on the outside looking in, 18 points back. Michael Annett is -28, while Austin Cindric is -31 and Noah Gragson -47. It’s clear that, barring a catastrophe, the drivers fifth on back will need a win at ISM Raceway to earn an unlikely spot in the Championship 4 field. – Dustin Albino

Mercedes dominated the headlines at Circuit of the Americas on Sunday (Nov. 3). Lewis Hamilton won his sixth Formula 1 World Championship and Valtteri Bottas drove a tactically smart and brilliantly executing race to claim his fourth victory of the season. Other teams had reason to celebrate, like McLaren, which has ostensibly locked up fourth in the team standings. There was also the success of Red Bull, which saw both of its drivers finish inside the top five again.

Ferrari, on the other hand, faced another disappointing race and one that was highlighted by Sebastian Vettel breaking his car and retiring early. Vettel’s rear suspension failure highlighted one of the more peculiar issues in Texas, which was the bumpiness of the track.

Though none of the other drivers experienced such a calamitous end, the track surface became a topic of conversation throughout the weekend. After Friday’s practices, Hamilton said the surface gave him headaches. Other drivers tried to defend the bumpiness of the track, but what could be seen is that the cars faced a unique challenge at COTA and one that hampered the ability to put on the best of shows.

Rarely does the track surface become a topic in F1, though in NASCAR the issue with weepers has frequently come to the fore. For that very reason and likely due to language in the track’s contract with the FIA, COTA will be closing for extensive surface repairs over the winter. Turns out not everyone can get back to discussing what happens on the track…. – Ava Ladner

In the GT Daytona class of sports car racing, the championship-winning pairing of Mario Farnbacher and Trent Hindman has been split up.  Hindman is likely to be upgraded to the Gold rating for 2020, prohibiting him from pairing with another Gold-rated driver in the class.  As a result, Meyer Shank Racing with Curb-Agajanian has signed Matt McMurry to partner with Farnbacher full-time in 2020.

McMurry comes to the team after winning the LMP2 championship with PR1 Mathaisen Motorsports.  There was not a whole lot of competition there this year, sadly.  In addition to his LMP2 experience in IMSA and the European Le Mans Series, McMurry ran the full Blancpain GT Series Endurance Cup in an NSX for Jenson Team Rocket LJN.  He failed to score a point, but had a best finish of 13th (in a 46-car field) at Monza in April.

Originally, the LMP2 class was designed to be a Pro-am class.  This rule change moves it even more in that direction. – Phil Allaway

“Now, the goal becomes the big 5-0. Could it happen at Homestead in the finale?”

I’m sure he will do whatever he can to make that happen…. even if it means purposely wrecking the entire field on a restart like he did at Talladega.