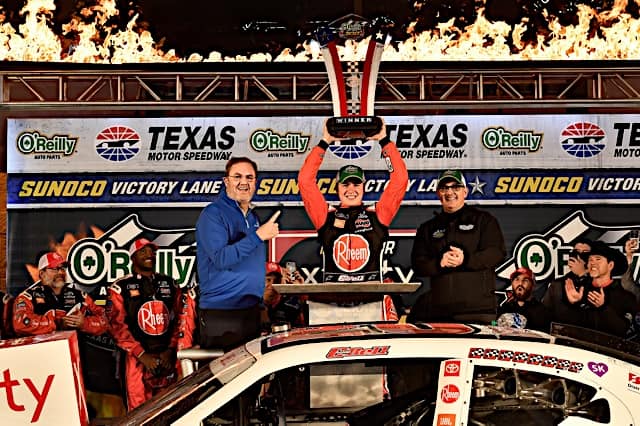 If Marvel’s Thanos existed in the real world, he’d have to admit that Christopher Bell was just as inevitable. If Benjamin Franklin was around today, he’d be forced to amend his famous quote about death and taxes to include the driver of the No. 20 Joe Gibbs Racing Toyota on his short list of life’s certainties.

Hyperbole? Not after seeing Bell and his team keep their cool during an eventful O’Reilly Auto Parts 300 at Texas Motor Speedway. While other playoff drivers ran into trouble, multiple cars tested the infield grass to their detriment, and one team not even running for points tried a pit strategy gambit that nearly paid off, Bell simply did what he does, leading more than half the laps, sweeping every stage and claiming his eighth NASCAR Xfinity Series win of 2019.

Not that it was a total Sunday drive on Saturday night in Texas. Early in the final stage, Bell reported that he thought his brakes might be going away. That turned out to be merely “softness” in the pedal, not a complete failure, and never derailed Bell’s drive back to the front.

And while Bell was impossible to deal with any time he had the lead, he ended the race in the most commanding position he held over the 300-mile race, enjoying a lead of more than five seconds over Ross Chastain, the driver who made the aforementioned attempt to go long on fuel to try stealing the win.

Even though the victory meant little in the grand scheme of the playoff picture — Bell was always going to make the Championship 4 thanks to his stellar point total overall — it’s fitting that the No. 20 team is now locked in for Homestead. It also feels like that group is peaking at exactly the right time, something Bell confirmed when asked after the race if he felt like the favorite for the title.

“I like where we’re at,” Bell said in Victory Lane. “There was a time earlier in the year where we were going to some of these racetracks, and I felt really good, and we just couldn’t compete with some of the other competitors. Right now, we can be a little bit off and I’m still right there with them.”

That’s his way of saying that if his team is on its ‘A’ game at Homestead, it’s going to be a nearly impossible task to deny Bell the championship.

Good luck to everyone else who ends up in the Championship 4.

When you aren’t competing for points or a championship, your goal really should be to do whatever it takes to take the checkered flag. For Chastain and his Kaulig Racing team, that’s exactly what they did, keeping the No. 10 Chevrolet out for what initially appeared to be an impossibly long final fuel run.

The NBC Sports team noted early on that it would take multiple cautions to even think about making it to the end without running out of fuel, and the race cooperated with a number of cautions during the final stage. The big problem was Bell, of course, but if that brake issue had been bad enough to end his night, Chastain probably would have ended up the winner.

As it was, he finished second, his best Xfinity Series result since winning at Daytona back in July. Chastain is slated to run for the Xfinity championship in 2020, and it’d be foolish not to consider him a preseason title contender.

It’s quite possible that it was Tyler Reddick, not Bell, who had the fastest car when everyone was still running at Texas. We could have been treated to an epic battle for the win had his No. 2 Chevrolet been in one piece for the closing laps (though probably not, for reasons we’ll get to in a second) but it was junk by then.

What happened? Well, while Bell was safely out in front, Reddick was stuck in traffic, where things like this can occur.

A huge hit for the No. 2.@TylerReddick climbed out under his own power. pic.twitter.com/fNfuMEXvEK

Reddick has shown he has the speed to run with Bell, and barring a complete disaster at Phoenix, he’ll get a chance to defend his championship in a few weeks. The questions for his team are consistency and execution, and this isn’t the time to lack answers for them with so much at stake.

The other bad thing during the O’Reilly Auto Parts 300 (Nov. 2) was the overall racing. Other than a handful of side by side battles, the lead only changed hands when lapped traffic became a factor, and while cars could often follow right in the tracks of the race leader, there wasn’t much they could do to try to pass.

It felt like some of this season’s Cup Series races on intermediate tracks, and that’s not a compliment. The warmer temperatures expected for the Cup race on Sunday might mean the traction compound has more of an effect, and for the sake of avoiding a second straight day of follow the leader, it better.

Noah Gragson came to Texas still technically alive to make the Championship 4, but the truth was that he would likely need to win to move on. Spoiler: He did not.

Gragson was behind the proverbial 8-ball from the start, failing to finish the first stage in the top 10. He grabbed some much-needed points by ending the second stage in sixth, but that wasn’t going to be enough to change his fortunes with regard to the playoffs.

Perhaps with this in mind, Gragson tried this move later, and it turned out poorly.

The No. 9 wasn't clear and will take a ride through the grass as a result.@NoahGragson | #NASCARPlayoffs pic.twitter.com/nn9rHj1tFY

The ugly part was what followed. Gragson’s No. 9 Chevrolet was clearly spewing fluids on the track, and his crew chief could be heard pleading with him to shut off his engine. Instead, Gragson limped the car back to pit road, necessitating a lengthy cleanup.

Yes, Gragson probably wanted to do whatever it took not to wind up 30th, but he did exactly that anyway. It was reported on the race broadcast that driver and crew chief were summoned to the NASCAR hauler after the race, likely to get an explanation for why they didn’t just shut it down after facing off with the infield grass and losing. The whole thing was pretty silly, especially since Gragson has one last Hail Mary shot at a win in Phoenix.

Chastain has already received his just due, and Ryan Sieg also had himself a nice race by coming home 10th. The actual honors for this week, however, go to Ray Black Jr., who wheeled his No. 07 SS-Green Light Racing Chevrolet to a 12th-place result. That was just one spot behind Black’s season best of 11th (accomplished at both Las Vegas and Iowa) and his third straight race finishing 17th or better.

“Through the tri-oval, you get really tight behind guys when you’re squared up behind them, nose to tail. Trying to get myself a little bit of air on the left-front and just got hooked. Racing at this place is really fast, and … it sucks.” – Noah Gragson

“I just didn’t do a good job of executing tonight. I couldn’t get off pit road, I didn’t do the restarts I needed to. That got us mired back in some of that mess there, and that’s what I deserve if I can’t keep it up front.” – Tyler Reddick

“That was pretty special to win here at Texas. I’ve got a lot of family over there in the background.” – Christopher Bell

Maybe not the most exciting race ever, even by Texas’ own standards, the O’Reilly Auto Parts 300 was at least eventful and intriguing. In the end, it changed little in the playoff picture, save for locking in Bell and widening the points lead for Justin Allgaier to increase his chances of making the Championship 4 despite not having a win in 2019.

What Bell’s victory did do was ensure that no matter who wins the next race, two drivers will make it to Homestead on points. So ISM will still be tense, though the likes of Gragson, Austin Cindric and Michael Annett are facing de facto win or go home scenarios.

The penultimate Xfinity Series race of 2019 awaits at ISM Raceway, which will set the field for the Championship 4. There’s also some bad news for anyone hoping to grab one last win: Bell won this race last year, and now will have nothing to lose by going all out to repeat.