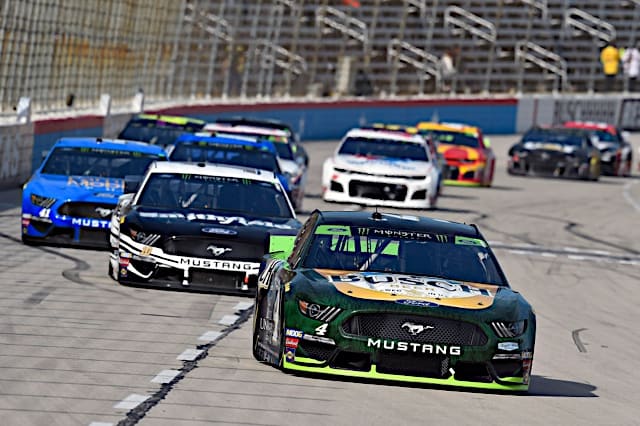 Sunday’s 500-mile race at Texas Motor Speedway was almost like two completely separate races.  The first quarter of the race went at a snail’s pace due to the wrecking.  Another portion later on had a number of cautions grouped together.  Then, you had long green flag runs in other parts of the race.

Entering Texas, much of the talk was about the stupidity that occurred after the First Data 500 in Martinsville.  I just find the aggressive holding and shoving and cussing to be really stupid, yet here we are with 15-20 minutes of that discussion during pre-race coverage.  Also, NBCSN must have aired the clip of Tony Stewart going on about how sad the whole thing is at least three times.  It struck me as annoying.

Also, a place like Texas is far too dangerous to try to pull intentional stupidity off.  I wasn’t expecting anything to happen between Denny Hamlin and Joey Logano Sunday, and sure enough, nothing happened.

During NASCAR America Sunday, an interesting piece on driver training aired.  Jeff Burton went to Chip Ganassi Racing, where he met with former Cup driver Josh Wise, who serves as Ganassi’s Driver Performance Manager.  Wise puts Burton through a series of exercises designed to test hand-eye coordination, the same ones that Kyle Larson and Kurt Busch have to do.

I can’t recall seeing a similar feature on NBC Sports programming, but the kind of stuff seen here is not dissimilar to stuff on SportScience in the past.  There is no video on YouTube right now, but I recall a somewhat similar piece on ESPN in the past featuring Carl Edwards.  He apparently had some of the best scores ever seen.

We also meet Chris Morris, a former motocross racer who was paralyzed from the waist down in a practice crash in 2014.  Today, Morris races a UMP Modified on short tracks in Texas, one built by Lethal Chassis (owned by David Stremme) that is modified to allow him to race with hand controls.  Today, drivers racing with hand controls is rare, but it can be done.

The drivers that do all have their own stories.  There’s Billy Monger, who lost his legs in a F4 race at Donington Park, but now competes in Euroformula Open, a series for F3 cars in Europe (he won on the streets of Pau in France earlier this year).  Another example is Michael Johnson, who races for JDC-Miller MotorSports in IMSA Michelin Pilot Challenge.  Like Morris, Johnson was paralyzed in a motorcycle crash described in his bio.  Since then, he switched from two wheels to four and continued his career.  He’s continued to show improvement and is very competitive in the TCR class.

During the early portions of the race, there was a good amount of coverage given to the PJ1 traction compound that had been laid down and how it was affecting things.  The previous night, drivers in the Xfinity Series went up there with varying degrees of success.  However, the rules in play for Cup cars are substantially different.

A couple of drivers tried to go up there early on, but the PJ1 was not “activated” yet.  That led to some moments on-track.  The Brad Keselowski–Ricky Stenhouse Jr. incident was the most chaotic of them.

According to the booth, the PJ1 results in debris such as marbles from tires gluing themselves to the track.  Naturally, such an instance does not help spread out the groove.  In fact, it could more or less create a boundary line where you don’t cross it at all.  Thankfully, things got better as the race went on.

Later on in the race, Burton ranted against grass in the quad-oval after Hamlin spun and ruined part of his splitter.  I wouldn’t even argue that the grass was to blame here so much as Hamlin’s car jumping over turn 4 of the quarter-mile track and damaging the nose on landing.  That would have happened if it were pavement that he landed on.

My colleague Bryan Keith also described this outrage as a possible conflict of interest on Monday, noting that Burton’s son Harrison is sponsored by Fields, a company that installs artificial playing fields.  Yeah, that doesn’t look good.

There are solutions to this ongoing problem that don’t involve forcing tracks to spend a buttload of money to install field turf or pave over grass.  Ditching the “no ride height rule” is one of them.  Going back to a valence is another.  I still don’t understand how the heck a Cup car has less ground clearance than a LMP1 prototype or a Formula 1 car.  Something’s wrong with that.

Finally, early on in the race, NBCSN aired a piece about Daniel’s Amigos, a fan club for Daniel Suarez that had a big crowd at Texas last weekend.  A group like Daniel’s Amigos is designed to help spread NASCAR fandom more readily into the Hispanic community.  I’m not against that.  Expanding the fan base is a good thing.  NASCAR is known for having one of the most homogenous fan bases in all of sports.  Anything that makes the sport more welcoming is fine by me.

There’s just one problem.  This piece strikes me as something that could have aired before the race as part of NASCAR America Sunday or Countdown to Green.  It should not air on lap 71 of the race.  It was apparently airing as a run-up to a NonStop break that never happened because of Corey LaJoie‘s second wreck.  The only reason NBCSN was able to do that is because the Amigo’s piece could have been viewed as a commercial in and of itself.  The gripe here is simple.  You shouldn’t be taking away viewing of actual racing to air features like that.  This isn’t 1988.  You can’t do that anymore.

With Sunday’s race having non-playoff cars in contention more than usual, the coverage was a little more spread out.  There was a decent amount of racing for position as the groove gradually widened out.  Honestly, the racing was actually enjoyable once they stopped wrecking.  Based on what we saw, Kevin Harvick clearly had the best car.  He was the only driver that could get away.  Aric Almirola couldn’t do it.  Jimmie Johnson couldn’t.  Neither could Suarez or Clint Bowyer.

Post-race coverage was decent, but the early cautions resulted in the race running long.  As a result, there were fewer interviews than normal.  The playoff focus was still quite heavy, despite this race being one that playoff drivers dominated the least so far in the playoffs.  Makes me wonder what would have happened if Almirola or Suarez won.

Overall, while Sunday’s race was rather long, it was enjoyable to watch.  It didn’t quite match the spring race for lead changes, but there was plenty of action for those watching to keep themselves occupied.  NBCSN does need to watch out in order to ward off any accusations of conflict.  Do I think Burton was trying to advertise Fields when going on about how there should be FieldTurf (or whatever artificial product, since there are a bunch of them) in the quad-oval?  Probably not, but we shouldn’t have to ask the question.

That’s all for this week.  Next weekend is the penultimate weekend of the NASCAR season.  A quadruple-header of racing begins Thursday with the K&N Pro Series West season finale.  Trucks are Friday night, Xfinity runs Saturday and Cup on Sunday.  By 8 p.m. Sunday night, we’ll know for sure who is going to be racing for the championships in Homestead.

In addition, IMSA has their post-season Encore event on Sunday.  This is a three-hour endurance race for GT3, GT4 and LMP3 cars (TCR cars are eligible as well, but none entered).  TV listings can be found in the Television tab.

We will provide critiques of the Cup and Xfinity races from ISM Raceway for next week’s edition of Couch Potato Tuesday here at Frontstretch.  If time permits, we’ll have the Gander Outdoors Truck Series race as well.  For this week’s edition of The Critic’s Annex, we’ll cover Saturday night’s chilly O’Reilly Auto Parts 300.  38 degrees for an Xfinity race?  Good or bad?  You’ll have to check it out to find out.  Meanwhile, Thursday night’s K&N Pro Series West race in Phoenix will be covered in The Critic’s Annex next Thursday.

Burton has been a politician for a long time. Sure he was advertising the product. Not a fan when he promotes his sons sponsor

Any person with a conflict of interest should not be in the broadcast both. But if we held people to that standard, then there would not be anyone in the both.

Exactly the cars should have a valance again. 60 or 65 years of grass at race tracks and it was never a problem. Now suddenly it is a problem. But think about who we are dealing with, Nascar. This is the bunch that overhauled the whole sport in 2004 because of what happened in 2003. Instead of a slight change in points to make winning worth more, they changed it all.

How come Burton and Junior don’t say how they are related to the drivers on the track with the same last names? Is that a conflict of interest. Fans want to know. It’s just a little information, not like making us watch the driver’s children in victory circle or before/after race interviews every week.