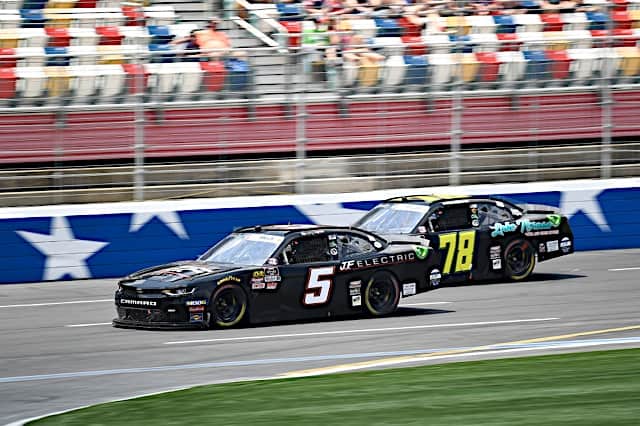 BJ McLeod, owner of BJMM, confirmed to Frontstretch both drivers will be back with the team next season. Miller, 22, is signed through 2020, thus making Mills a priority to return and build off the 2019 season.

“Vinnie is full-time, for sure. Matt is 99 percent, I would say 100 percent,” McLeod said. “We’re still getting particulars done, but it looks really strong for next year.”

For the second consecutive season, the company will field a third car, the No. 99. Like this year, it will see multiple drivers compete in it.

“The third car will have a carousel of drivers in it again, but that could change because nothing is set — not one race is sold for the [No.] 99 next year,” McLeod added. “We’re still looking at what package fits best for the team.

“I wouldn’t be surprised to see us really try hard in five to seven races with each car next year and be able to afford tires and make sure our pit crew gets time to train, and really try to run in the top 15 probably five to seven races with each team at different points throughout the year,” McLeod said. “I would say you’re hopefully going to see us put some finishes down that are new to the team.”

This season, Mills leads the team with seven top-20 finishes, most recently finishing 18th — tying a career-best on a non-superspeedway — last weekend at Texas Motor Speedway. The Virginia native sits 21st in the championship standings, six points ahead of Miller, despite missing four races.

Miller is right behind in 22nd, with a best finish of 11th in July at Daytona. The Michigan driver has a quartet of top 20s in 31 races this year.

McLeod added that he’s become friends with both Mills and Miller away from the track, and the team is closing in on taking that next step as an organization.

“They both are good to me, and I’m actually friends with them off the track,” McLeod said. “It was nice that they had sponsorship, but I enjoy working with them because I don’t want to be around people that I can’t work well with and try to help us both. I enjoy hanging out with them, and not only that, but trying to race together is fun.

“I’m so proud of my team. We moved into a new building — a really nice building about a year ago, and the dividends are paying off now because we are really organized. We are operating like a top 15 team. We’re still using a race budget that’s around 25th, but at shop and everything away from the track has really elevated to top 15.”