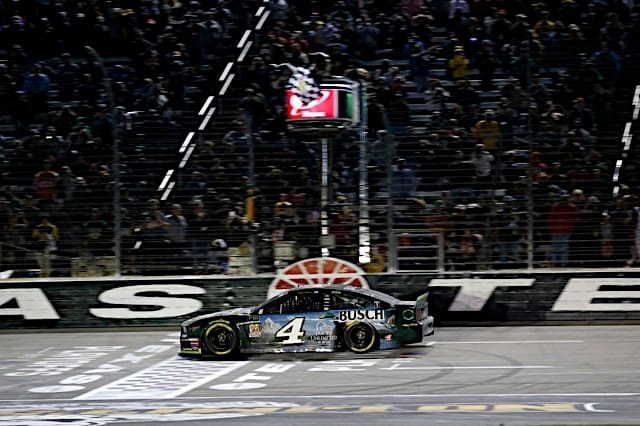 Sunday’s (Nov. 3) Monster Energy NASCAR Cup Series’ AAA Texas 500 at Texas Motor Speedway had to deal with two main complications right off the bat: the Formula One United States Grand Prix about three hours away at the Circuit of the Americas in Austin, and NFL football (though the Cowboys were off, playing on Monday Night Football this week).

Then, thirdly, it was the race that never ends, or excites, as car after car brought out the caution flag (11 in total) and Kevin Harvick had the untouchable rocket car this week.

This was the third race out of the past four that Hendrick Motorsports’ Jimmie Johnson has failed to complete, and it was the eighth time this season he’s finished in the 30s (34th on Sunday). He only has three top fives and 12 top 10s this season with a single pole and stage win earned, and has an average finish of 17.6 — the worst of his Cup career .

Team Penske’s Joey Logano was fourth, continuing the Mustang stampede up front (seven were in the top 11). The defending Cup Series champion has two race wins, 10 stage wins, three poles, 11 top fives and 19 top 10s in 2019. He also has a chance to make it back-to-back titles at Homestead, if things work out right.

Roush Fenway Racing’s Ricky Stenhouse Jr was a last-place 40th after crashing halfway through the first stage.  It was his fifth DNF of an underwhelming season, and his final year behind the wheel of the No. 17 has resulted in just three top 10s with a best finish of fifth in the Coca-Cola 600. His average finish is 20.6, and he’s mired in 23rd in the standings out of 39 racers competing for Cup points (this total includes part-time drivers).

Moving to  JTG Daugherty Racing in 2020, it doesn’t seem likely that his numbers could get worse, though, they likely won’t be much better, either.

With seven race wins, eight stage wins, 14 top fives and 22 top 10s, Joe Gibbs Racing’s Martin Truex Jr has already locked up his spot in the finale, and he was the lead Toyota in sixth on Sunday. With the exception of Talladega, the No. 19 hasn’t finished worse than seventh since the playoffs began eight weeks ago.

The good news for Team Penske’s Brad Keselowski is that he’s won three races this season, along with four stage wins, three poles, 13 top fives, and 18 top 10s. The bad news is that he’s been eliminated from the playoffs, had four DNFs, and has an average finish of 12.8, and that the wheels have fallen off, with finishes of 38th, 25th, 19th and 39th since Indianapolis.

John Hunter Nemechek‘s Cup Series debut didn’t come under excellent circumstances, filling in for rookie Matt Tifft after his seizure at Martinsville Speedway last wekeend, but the Speedy Cash No. 36 Ford Mustang for Front Row Motorsports wins the Paint Scheme of the Week, because the simplicity of the spring green or apple green and red worked really well.

Nemechek stayed out of trouble and brought his car home in 21st, tops among the Front Row trio.

Absolutely. Hard to describe the competition how much more depth there is in cup. Everyone is just on it. Team chemistry and experience is worth so much https://t.co/nz37Eagawi

Tifft answered fan questions on Twitter during the race, which seems like a useful way to provide insight to fans and stay connected to his peers, even if he wasn’t behind the wheel.

Most races really ought to have a hundred or so miles chopped off of them.

Man, those ducks can really fly! ??

Donating to a good cause is always laudable.

The fields for the championship races will be set this weekend at ISM Raceway near Phoenix.

The Gander Outdoors Truck Series will run the Lucas Oil 150 on Friday, November 8, at 8:30 p.m., with TV coverage on Fox Sports 1. The current Championship 4 lineup won’t change as Ross Chastain wins the race.

Saturday, November 9 the Xfinity Series will run the Desert Diamond West Valley Casino 200 around 3:30 p.m. ET, with TV coverage on NBC. Chase Briscoe will slip into the Championship 4 in his rookie year.

In Cup on Sunday, November 10, the Bluegreen Vacations 500 will go green around 2:30 p.m. ET, with TV coverage on NBC. Chase Elliott is likely the second-best racer at this track not named Harvick, and he’ll probably have all of Hendrick’s resources going towards his car this weekend. The No. 9 will take one of the Championship 4 spots.