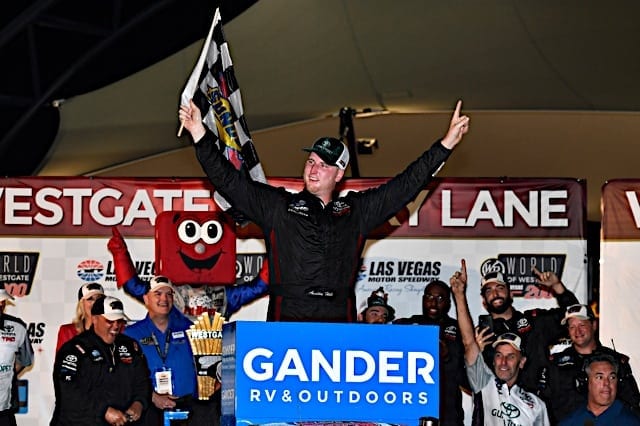 Austin Hill will return to Hattori Racing Enterprises’ No. 16 Toyota in the NASCAR Gander Outdoors Truck Series in 2020, the team announced Tuesday, Nov. 5.

Hill is currently in the playoffs going into this weekend’s race at ISM Raceway, having scored six top-five finishes and 12 top 10s alongside three victories.

“It’s awesome to be coming back in 2020,” Hill said in a press statement. “We have plenty left to accomplish this season, and that’s our number one focus, but it’s great to have things in place for next year to where we can move right into 2020. A year ago, I never thought I’d have a real chance to be at a place like HRE. …We’ve put together a good year so far, and I know we can do even more next season.”

2018 series champion Brett Moffitt departed the team for GMS Racing after that title run, but Hill kicked off this year for HRE with a win at Daytona.

He followed that win up with a solid season, with the other two victories coming at Michigan and Las Vegas.

“Austin has done a good job this year, and we’re looking forward to improving even more next season,” team owner Shigeaki Hattori added. “We’re glad to have Austin back for next season, but we want to finish this season strong with another championship.”

The team did not mention any Xfinity Series plans; it has fielded a car twice for Hill in 2019 in a partnership with MBM Motorsports.