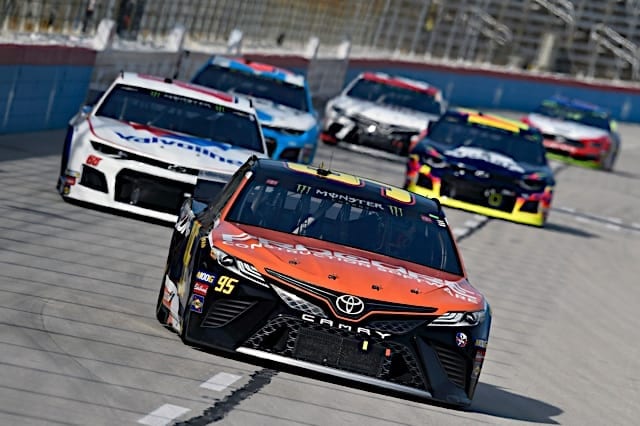 Matt DiBenedetto has shown flashes of brilliance this year, but it is the steady mid-pack results that really highlight how 2019 has been a year of improvement for the California native.

The No. 95 Leavine Family Racing driver was again the top underdog at Texas Motor Speedway on Sunday (Nov. 3) in the AAA Texas 500, finishing 14th. The result was DiBenedetto’s best career showing at Texas, and only his second finish better than 25th at the venue.

DiBenedetto certainly won’t be considered an underdog next year when he moves to the Team Penske-supported No. 21 car for the Wood Brothers, not that he’s much of one now after the impressive season he’s has enjoyed.

Behind DiBenedetto, only Ty Dillon and Chris Buescher were able to finish in the top 20. Dillon wound up 18th at the end, and while not incredibly surprising, it is worth noting that in seven starts at Texas, Dillon has never finished better than 13th or worse than 24th.

Buescher has been a top-20 staple throughout the final two-thirds of the races in 2019 and continued that with his 19th-place finish at the 1.5-mile Texas quad oval.

The Xfinity Series held their Texas two-step on Saturday night, and like the Cup race, the best in class was one of the usual suspects. Ryan Sieg was the only underdog to qualify for the playoffs, and he was the only one in the top 10 at the checkered flag last weekend.

In addition to Sieg, the SS Greenlight Racing teammates of Gray Gaulding and Ray Black Jr. wound up 12th and 13th, respevtibely, at the finish. 2019 has seen quite the improvement for the organization owned by longtime racer Bobby Dotter. Also laying claim to a top-15 finish were Josh Williams (14th) and Chad Finchum (15th).

The ultimate underdog of NASCAR in the minds of many fans was and will always be Alan Kulwicki. Kulwicki was a homegrown racer from Wisconsin who always prided himself on doing things his way. With the upcoming race in Phoenix, it’s a perfect time to relive the moment the NASCAR world was introduced to the guy with the odd name and even more odd victory celebration.

Kulwicki entered the 1988 season with just four top-five finishes, including a runner-up spot at Pocono Raceway in 1987. He would add seven more in 1988, the last of which was his memorable first career win in November of that year.

Which brings us to the inaugural event at Phoenix (now ISM) Raceway. Despite leading some laps, Kulwicki wasn’t the class of the field in the race. That distinction went to Ricky Rudd. But like most underdog wins, there was an element of good fortune involved for Kulwicki. While leading his 183rd lap and just 16 circuits away from victory, Rudd suddenly slowed with an engine faulure. Kulwicki flashed by to inherit the lead and cruised to his first career win.

Then things got weird. Kulwicki proceeded to make a lap backwards after taking the checkered flag. The announcers, clearly confused, weren’t quite sure what to make of the maneuver. When he arrived in victory lane and was asked about his peculiar post race adventure, he explained that he wanted to salute the fans with his self appointed “Polish victory lap.”

Kulwicki  only got to break out the unique celebration five more times in his career. He would win four more races and the 1992 championship. Sadly, he perished in a plane crash on April 1, 1993, leaving behind a mountain of unfulfilled potential and precious few Polish victory laps.

Busted for speeding on pit road and had to start in the back with the squirrels.

Got caught up in someone else’s mess and ended our day. Thanks to the @MystikLubes team for their support.

We will move forward to Phoenix. pic.twitter.com/8Dr7HBHadb

Tough practice for the 39 team. Got loose and wrecked our primary car. Unfortunately, the back up car was our Phoenix car as we planned on staying out west this week without heading back to the shop. The guys have been thrashing hard to get the car ready for tonight’s race. pic.twitter.com/z0kZw3Oekv

David Starr gets into the wall, then digs into the grass at @TXMotorSpeedway

Some fresh new colors on the No.13 for tonight’s @NASCAR_Xfinity race ? pic.twitter.com/M6sOpSgZLy

To David Ragan. It takes a spook to know a squirrel !

I’m surprised there was no mention of John Hunter Nemechek’s clean, 21st-place debut in the FRM #36.