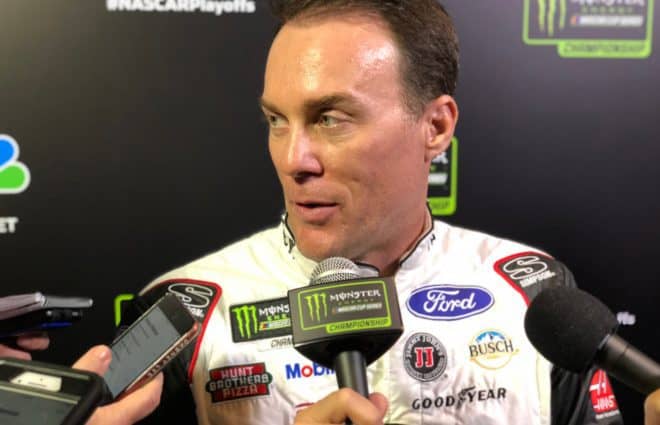 Kevin Harvick while being interviewed at Championship 4 Media Day at The Miami Beach EDITION on Thursday, November 15, 2018. (Photo/Davey Segal)

Did You Notice?: NASCAR Parity Producing a Tiresome Championship 4?

Did You Notice? … The 2019 Monster Energy NASCAR Cup Series Championship 4 could be an exact replica of 2018? Two of last year’s drivers, Martin Truex Jr. and Kevin Harvick, have already qualified by winning in this year’s Round of 8. Kyle Busch and Joey Logano, meanwhile, hold at least a 20-point edge over their closest competitors heading to this weekend’s cutoff event (Nov. 10) at ISM Raceway.

That’s a tough deficit to close without some sort of catastrophe or someone winning to steal an automatic bid. But the quartet of Denny Hamlin, Ryan Blaney, Kyle Larson and Chase Elliott have just one victory in Phoenix between them – and that came way back in 2012 (Hamlin). Considering Busch has won the last two races here, he feels a safe bet despite an inconsistent 2019 playoff performance. Logano, the reigning MENCS champion, has won here as recently as fall 2016 and remains confident he’ll pull through.

If these standings hold, it would mark the first time in six years of NASCAR’s current format we had back-to-back identical Championship 4s. To be fair, there’s parity within that group as three teams are represented (Joe Gibbs Racing, Stewart-Haas Racing, Team Penske) along with two manufacturers (Ford and Toyota). And the four drivers represented couldn’t split the pie more equally: they’ve each earned one title apiece from 2014-2018.

Isn’t that the type of equality fans want in racing? Well, yes and no. On the plus side, this quartet has been a part of a special run for a sport that was once dominated by a select few. We’ve seen five different champions in five years: Harvick (2014), Kyle Busch (2015), Jimmie Johnson (2016), Truex (2017) and Logano (2018). It’s the first time that’s happened in the 70-year history of the Cup Series and it’s a far cry from Johnson’s steamroll through the postseason field from 2006-2010.

But when it comes to drivers who qualify for the Championship 4, that’s a different story altogether. 20 eligible spots the past five years have been gobbled up by just a handful of drivers.

So far, that’s 14-of-20 spots (70 percent) for the quartet currently in position to make the championship yet again. It’s clear there’s a level of separation between them and the rest of the 40-car grid.

That applies to race teams as well.

Surprise, surprise! The same three teams in position to make this year’s Championship 4 have also gobbled up 70 percent of the spots during the last five years. The next team trailing them on the list, FRR, no longer exists.

You certainly can’t fault the best teams and drivers for being on top of their game. But Logano, Truex, Harvick and Kyle Busch are established names with a combined 59 years of Cup experience. They’ve been there, done that and their name recognition makes it hard to create compelling storylines outside of the NASCAR base that will watch the championship battle no matter what. Their presence is more likely to cause fatigue among race fans than create a furor to see them.

Compare that to the playoff runs we saw in the first few seasons of the title race. There was Newman’s shocking 2014 Cinderella run to the finale, giving Harvick a run for his money despite going winless on the year. (He famously roughed up Larson at ISM to earn a spot). The next year, Gordon positioned himself for a title in his last full-time season running the No. 24 Chevrolet. The NASCAR Hall of Famer’s quest produced the highest ratings and viewership for Homestead’s finale since 2005.

We’ve seen a marked decline in championship ratings since, dipping 43% from 2015 to last year as it lags behind some of the stick-and-ball sports. (Logano’s title earned a 2.5 in the Nielsens; by comparison, the World Series just finished up with an 8.1 average). And while NASCAR viewership has stabilized this year, the same faces at the front means a sudden ratings bump is unlikely.

A sport now built around playoff performance also hurts the ability of names like Blaney and Larson, and NASCAR Most Popular Driver Elliott to break through to a larger audience. This trio leading the 20-something group of next-generation stars has failed to crack the Championship 4. That means that despite a handful of victories among them, they get pushed toward irrelevance under this format. Just like an NFL Wild Card game, do you really remember who lost in a playoff semifinal?

You wonder without this type of postseason format, would Erik Jones‘ Southern 500 victory have had more of an impact? He’s been all but forgotten after a failed inspection at Richmond Raceway derailed his playoff hopes. Three wins in the season’s first 12 races from Keselowski are irrelevant in the face of a failure to advance; the same goes for Hamlin’s five victories if he falls flat at Phoenix.

Any type of playoff format has its own set of pluses and minuses. The postseason, in some shape or form, is here to stay. But the current standings showcase NASCAR’s seemingly stuck-in-place scenario of owners and drivers entrenched at the top.

What will cause the balance of power to shift? My thought is the Gen-7 rollout in 2021 but we’ll have to wait and see.