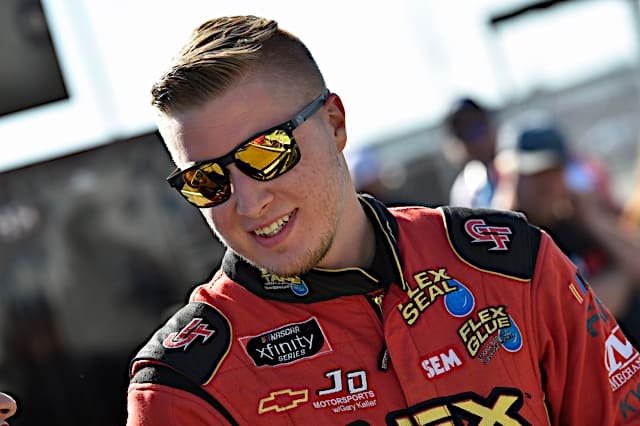 Four years ago, not many people knew the name Garrett Smithley. Since then, he’s been a staple for JD Motorsports in the NASCAR Xfinity Series.

Smithley, 27, will be finishing up his fourth full-time Xfinity season next weekend at Homestead-Miami Speedway. Ironically, he’s just as surprised as any that the relationship with JDM has gone the way it has.

Not because JDM is a team that overachieves with limited funding, rather because Smithley’s path to NASCAR is unique.

His career started 12 years ago, when he raced bandoleros at Atlanta Motor Speedway. In 2011, Smithley joined the Richard Petty Driving Experience as a driving instructor. Between 2013-15, he made a total of five ARCA Menards Series starts, along with a quartet of Gander Outdoors Truck Series events in 2015 for MB Motorsports, owned by the late Mike Mitler.

In 2016, Smithley wanted to take the next step as a racecar driver, moving up the ladder to Xfinity. In what was supposed to only be a couple races, the Georgia native ran every event for JDM in 2016 besides the season opener at Daytona International Speedway.

“I wouldn’t be here without Johnny,” Smithley recently told Frontstretch. “I ran the one Xfinity race [2015 at Homestead for Derrike Cope], got to Johnny’s doorstop, and I said, ‘Johnny, I understand your situation. I understand we can’t wreck cars. I’m going to go out there and prove to you that I can go out there and do this without wrecking your stuff. I understand I’m not going to win.’ He [Davis] says, ‘Alright, I’ll give you a shot.’

“We ran Atlanta, Las Vegas [Motor Speedway], Phoenix [ISM Raceway], and he told me before the season started Eric McClure was in for Daytona, so I didn’t run Daytona. He said we’ll probably have someone in for California [Auto Club Speedway], I think partly because he didn’t trust me going to California, which I wouldn’t trust me either at that point. Then, he said, ‘You can start and park some, you can run here and there. If you find some tire money, you can come run.’

“It turned into we ran good at Atlanta, good at Vegas, struggled at Phoenix, but we ran good enough that we were far enough in the points that he said, ‘Hey, we’re going to take you to California.’”

The No. 0 team had a best finish of 12th at Talladega Superspeedway in 2016, finishing 18th in the championship points – Smithley’s best effort to date.

2017 started off with a bang, kicking the season off with an eighth-place finish at Daytona. Harrison Rhodes, then running for JDM, also took home a top 10.

Ironically, 2017 was Smithley’s worst season to date statistically. But what started out as a few races quickly turned into two full-time seasons with JDM.

“The sponsorship helped out because we ended up bringing more sponsorship throughout the season,” he added. “I think both him [Davis] knowing that I was going to take care of his equipment and me working so hard on sponsorship, he had to have liked me just a little bit to give me the opportunity and continue to do it.

“I think all of those different things together created something that he felt like was going to be a success. I wouldn’t be here without him, and obviously, he saw something.”

So what did Davis see?

“We just looked at him and gave him an opportunity,” Davis said. “They had a little funding, and we needed a little money, and it was a fit. He seemed like a very level-headed kid in our first meeting and understood our program when we talked to him and how we run the races with the dollar amounts he had to bring in and what we could find. He’s done a pretty good job at that.”

Fast forward to the present and Smithley has four career top-10 finishes, three of which have come at superspeedways. In the opening race of the 2018 season, he scored his lone top five at Daytona.

Thinking back on it, Davis has enjoyed having Smithley on the team, but wishes there was a tad more success.

“He’s gotten some better, I wish he was a little more advanced,” Davis said. “The biggest problem we have is you can’t advance any more without finding more money, and the money just hadn’t been there — sponsorship, marketing dollars, however you want to put it — just hasn’t been there to put more tires on it to give him a better opportunity to try and be better.”

This season, Smithley has a best outing of 12th at Talladega Superspeedway with 11 top-20 finishes. Sitting 18th in points, Smithley is enjoying his best showing since his rookie year.

Overall, Smithley is proud of the season his No. 0 team has had.

“I’m happy for the most part with where we’ve been running, but we’ve had a lot of self-inflicted injuries as far as pit stop mistakes, part failures or something happening with the cars,” Smithley noted. “We’ve had some really good runs. The only thing, for me, that I feel like we could have improved was not making mistakes on pit road and not having things like that happen.”

Over the past two months, Smithley has been in the news for a couple on-track incidents. In the first race of the Monster Energy NASCAR Cup Series playoffs at Las Vegas, he held his line and Kyle Busch ran into the back of him, leading to some outspoken comments from the 2015 Cup champion.

Later, at Kansas Speedway three weeks ago in Xfinity, Smithley drifted up in front of the race leaders Chase Briscoe and Christopher Bell, causing a three-car pileup.

Though he got off social media for some time because of the backlash, Smithley has leaned on Davis for advice.

“We’ve talked. The biggest thing for him is we lost a car, but we’ll move on from it,” Smithley said of the Kansas ordeal.

Davis also had some advice to Smithley for the future.

“You’ve got to tell the truth about what really happened,” Davis said. “You’ve got to go back and listen to the audio from the spotter to see if you could hear something or what happened. Own up to your mistakes when you make them and you’ll be fine in the future because you’ll pay more attention.”

As for 2020, it’s unknown if Smithley will return to JDM, as his name has circulated about moving to the Cup Series full-time. In a perfect world, he would like to be running full-time in both Cup and Xfinity, getting as much seat time as possible.

Davis noted the team is talking to other drivers to possibly bring in-house should they have more sponsorship dollars than Smithley — because after all, racing is a business.

“We have to have funding to do this and we’re talking to other drivers that have funding in place,” Davis said. “Right now, Garrett doesn’t have anything in place, so it’s certainly hard to predict if he will be with us or not, but he would be welcomed back if we could get the funding lined up.”

He may be thankful, but the rest of the field surely is not. This guy is a menace on the track. There is no excuse whatsoever for what he did at Kansas. Multiple laps down but he cuts right in front of the 2 leaders racing for the lead? What a moron. Frankly, he should have been parked for multiple weeks for that nonsense. Just horrendous track awareness.