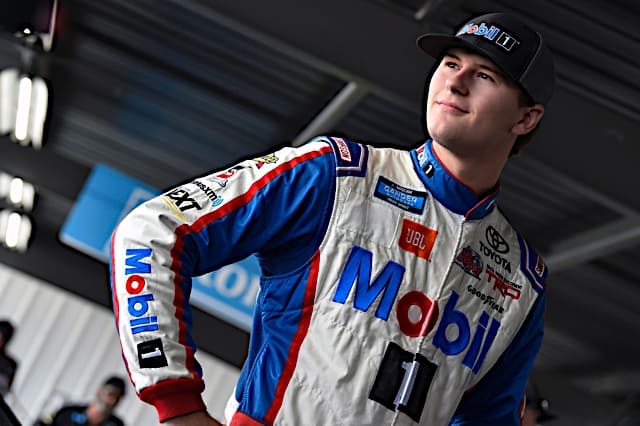 Ten drivers born in the year 2000 or later will attempt to compete in the penultimate NASCAR Gander Outdoors Truck Series race of the season at ISM Raceway in Phoenix. Should all 10 drivers make the field, they will break the record for most drivers born in 2000 or later racing in one of the three main NASCAR series. If this occurs, it will break the record set at the Truck Series race at ISM Raceway last year and the race this season at Bristol Motor Speedway.

Provided all eight of these drivers qualify for Friday's @NASCAR_Trucks Race @ISMRaceway, it will break the record for most drivers born after 2000, to start a #NASCAR National Series Race, breaking the record of seven that we had at @BMSupdates in 2019 and @ISMRaceway last fall.

So, who are these youngsters?

Four of these drivers compete full-time. Kyle Busch Motorsports drivers Todd Gilliland and Harrison Burton are both 19. Gilliland, of course, won the most recent Truck Series race at Martinsville Speedway. Although Burton has not been to victory lane in the Truck Series, he will graduate to the NASCAR Xfinity Series next year driving the No. 20 Joe Gibbs Racing Toyota.

Neither driver is in the top 10 in the point standings. A good finish for both could possibly thrust both into the top 10 and put them as the top two drivers who did not make the playoffs.

Tyler Ankrum is battling for a berth in the Championship 4. He is 15 points below the cutline, but the 18-year-old raced at ISM Raceway last year. Ankrum started 15th and finished sixth in that race.

DGR-Crosley is fielding five trucks for the first time in its history in the Lucas Oil 150. Will Ankrum’s four teammates provide feedback which can help him advance to the championship race at Homestead-Miami Speedway?

Tyler Dippel could use a good finish in the Lucas Oil 150. In his last four races, he did not finish and wound up outside the top 20. Last year at ISM Raceway, he started 13th and finished on the lead lap in 14th place.

Derek Kraus has only raced in three races this season, but he thoroughly impressed in his Truck Series debut at ISM Raceway last year. He qualified eighth, finished the second stage in 10th and crossed the finish line in eighth place. Kraus will attempt to capture the 2019 NASCAR K&N Pro Series West title in the season finale, also held at ISM Raceway also this weekend. He is currently first in the K&N West point standings.

Kraus, Sam Mayer and Ty Majeski all will race in both the Truck Series race and the K&N West season finale.

Mayer won the K&N Pro Series East championship this year. The 16-year-old will attempt to complete the whole distance in a Truck Series race — in his two races thus far, he has wrecked out of both races. However, he led 33 laps and won the second stage at Martinsville on Oct. 26. Mayer should have a fast No. 21 GMS Racing Chevrolet.

Carson Hocevar will attempt to make his second career Truck Series start, driving the No. 56 Chevrolet. Jordan Anderson Racing is fielding this entry in conjunction with Hill Motorsports. Owner/driver Jordan Anderson is confident in the 16-year-old Hocevar.

He crashed on my couch all last week in NC learning and working beside the guys in the shop. Know he’s going to make everyone proud ??? pic.twitter.com/7MigBCQl4f

Hocevar debuted in the 2019 Eldora Dirt Derby, driving the No. 3 for Anderson. He finished the first stage in eighth place but ultimately finished seven laps down in 25th.

Chandler Smith won five ARCA Menards Series races this year and has seven wins overall. The promising 17-year-old will drive the part-time No. 46 Kyle Busch Motorsports Toyota. Smith has finished inside the top 10 in all three of his Truck Series races this season with two top fives.

Two drivers will be seeking to make their Truck Series debut in the Lucas Oil 150. Driving the No. 20 Young’s Motorsports Chevrolet will be Colby Howard.

Howard has four starts in ARCA. He finished inside the top 10 in all four starts, and the Simpsonville, S.C., native will be driving for the same team which went to victory lane at Talladega Superspeedway.

Lastly, Carson Ware debuted in the ARCA finale at Kansas Speedway. In his ARCA debut, he gained nine positions to finish in 13th, one lap down. Ware will attempt to make his Truck Series debut driving the No. 33 Reaume Brothers Racing Chevrolet.

As the 2010s decade is nearly complete, it is only a matter of time before this record is broken. Is it possible next year Hailie Deegan, Ty Gibbs or Drew Dollar could make their Truck Series debuts? If so, all three drivers were born in 2000 or later.

Next year, the ARCA Menards Series and ARCA Menards Series West will race at ISM Raceway, which will also host the championship weekend for all three NASCAR national touring series. With drivers possibly auditioning for a ride for the following season, the 2020 Truck Series race will likely break this record if it does not happen sooner.