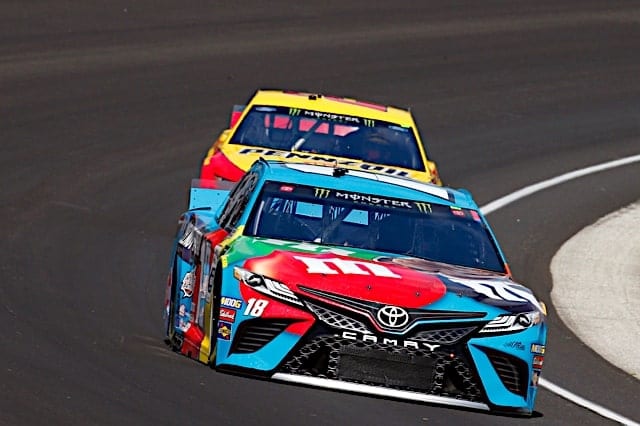 Who will advance to the final round of the Monster Energy NASCAR Cup Series playoffs?

When it comes to the Cup race this weekend at ISM Raceway, it’s really a question of who among Kyle Busch, Joey Logano and Denny Hamlin will not make the championship round.

Ryan Blaney and Kyle Larson may point their way into the Championship 4 if trouble strikes two of the three early, but that won’t happen. Chase Elliott can only make the next round by winning outright, and while it definitely is possible, it’s hard to be confident in him doing so at a track that he finished 14th at in the spring.

With how these playoffs have gone, I have a feeling one of those three bubble drivers are going to have problems early that would cost them a shot at the championship. And really, of the three, Logano is entering this weekend without a lot of momentum. Yes, he finished fourth last week, but that has been his lone top-five result in the playoffs this season. And this is a track that Logano has finished no better than 10th at since winning in 2016.

After years of declining attendance and television ratings, 2019 ended up becoming a year of stability. TV ratings were generally either a little up or a little down depending on the week. Of the 30 races this season not severely impacted by weather, 16 have been down and 14 have been up.

FOX’s coverage of the first half of the season was up by 6%, while NBC’s coverage has been up by 4%. While this isn’t that much different from last season’s low ratings, in the world of television these days, a roughly 5% increase is a big accomplishment.

Streaming numbers are significantly up, but this is both expected and still not as big a deal as you’d imagine just yet. The most-streamed Cup race on record, last month’s Monday race at Talladega Superspeedway, had just over 150,000 unique viewers. That’s a tenth of what the race drew on a Monday afternoon on NBC Sports Network.

Attendance numbers are hard to come by now, with both International Speedway Corporation and Speedway Media Incorporated going private and no longer releasing those numbers to the public. And besides that, it really doesn’t matter anymore; tracks make more money off TV rights than they do attendance, and it has been that way for a while. My hypothesis would be that attendance is down for the early- to mid-section of the season, but there’s definitely been an uptick in it since the Southern 500 with the exception of last month’s race at Dover International Speedway.

From a business side of things, NASCAR accomplished its goal for this season. Last year’s numbers fell dramatically, thanks to a series of big-name drivers retiring in the previous five years and Dale Earnhardt Jr. leaving Cup after 2017. Being slightly up was a big step forward, and now that NASCAR is entering the second half of its 10-year television contracts that came into effect in 2015, those ratings are going to matter more and more every season.

And the on-track product?

From a competition standpoint, it has been a mixed bag. The new rules package implemented this season has worked wonders on ovals a mile-and-a-half or longer, outside of some clunkers like Texas Motor Speedway and Atlanta Motor Speedway.

For the 13 Cup races that haven’t fit under this definition, it has been a wash. Drivers just can’t pass the leader under this package, and save for two great races at Bristol Motor Speedway, those races have generally been awful.

13 drivers have won Cup races this season, one more than 2018’s total. But that one, Justin Haley, won on the single biggest fluke in racing history, for a team that had one other lead-lap finish this season. For all intents and purposes, it’s the same as 2018.

Six organizations have won Cup races this season, five if we disregard Spire Motorsports. 2018 featured seven winning teams, the difference between the two years is that Richard Childress Racing and Furniture Row Racing won in 2018 and failed to do so in 2019.

So what does that mean?

It’s crystal clear now that the myth that there’s a wide variety of teams in NASCAR who can win any week is just that, a myth. Joe Gibbs Racing, Team Penske, Hendrick Motorsports and Stewart-Haas Racing are the big teams now. Chip Ganassi Racing is heavily supported by HMS, while RCR is on its own little self-made island right now with Germain Racing.

If you are a NASCAR driver and not driving for either one of those four super teams or for a team that is heavily supported by them, your only chance of winning is either luck, a wacky fuel strategy call or Daytona International Speedway/Talladega Superspeedway shenanigans.

There used to be a little more variety in winning organizations; see David Reutimann’s 2010 win at Chicagoland Speedway and Kasey Kahne winning in 2011 for Red Bull Racing. Both were legitimate wins by teams without much support from a larger team and would never happen in today’s NASCAR.

While NASCAR had a great 2019 from a business perspective, it is lacking heavily on the competition side. For the 256th time in this column, the current NASCAR team business model of relying on major funding from corporations is not working for all but the very tippy-top of the garage.

Much like America, NASCAR has entered late-stage capitalism, with the big teams either swallowing up the smaller ones or running them out of business, in NASCAR’s case by trickling down expenses they need to take on in order to stay competitive on the racetrack. It is a problem that has been brewing for a long time, and the NASCAR oligopoly is going to be the sanctioning body’s biggest issue heading into the next decade of competition.

Maybe it’s time to limit teams to, say, 2 cars and one ‘affiliate’?

I think defining the do’s and don’ts of an ‘affiliation’ is key. But I like your ‘thought starter’ SB. Formula 1 used to require unique engines and chassis’, but is now just unique chassis only. It hasn’t really effected who’s on top nor how close the overall pack is. Factory partner teams win most of the races. Ford and Toyota have one engine builder each. Chevrolet still can’t get their efforts centralized. A ‘kit car’ format in Indy Car has worked quite well, but those with the biggest budgets generally win their, too. I prefer a format that starts from a kit car, but allows for a lot of adjustment and defined areas for innovation.

I don’t think the crowd at Texas could be described as an uptick in attendance.