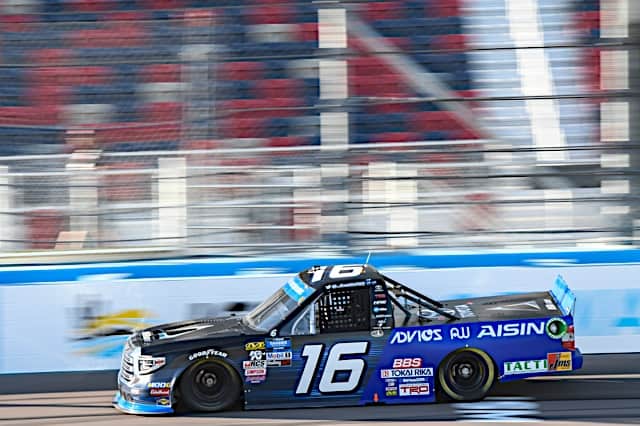 Entering ISM Raceway nine points above the cutoff and starting on the pole for Friday’s (Nov. 8) Lucas Oil 150, Austin Hill was feeling pretty good about his chances of advancing to the Championship 4 next weekend at Homestead-Miami Speedway.

But as soon as the green flag dropped, it was clear he faced an uphill battle. The No. 16 Hattori Racing Enterprises team fell back as the other playoff contenders, notably Matt Crafton, worked their way up through the field.

When the checkered flag flew, Hill was scored in 13th, falling seven points shy of advancing to the Championship 4.

“During that last long green flag run, it was terrible,” he said dejectedly. “I was just sliding the front end really bad, couldn’t put the throttle down, I just had to wait on it a lot. I hate that we finished where we did, especially after qualifying on the pole and showing speed in second practice. We’ll move onto Homestead and regroup for next year.”

As the 150-lap event wore on, little changed with the handling on the truck. But that was by design: the adjustments just went in the wrong direction.

“We made very minor changes and the changes were actually to free up the truck,” he said. “I don’t know if the track went through a change or what on the last run, but we were the tightest we’ve been all night and just couldn’t ever pass. I was faster than the three or four guys in front of me, when I got close to them I got even tighter. Just a bummer.”

Hill was “never made aware” of the points situation during the race, saying he went over not wanting to be notified pre-race.

“Wanted to go out there, finish the best we possibly could and wherever we ended up, we ended up,” he said. “If we made it, we made it. If we didn’t, we didn’t.”

Along with the disappointment of not advancing to Homestead, a three-win season in his first year with a new team left Hill feeling accomplished.

“I definitely felt like I made somewhat of a statement, but I really wanted to bring back a championship back-to-back for these guys,” he said. “That’s the only thing that’s really frustrating about it that I feel like I didn’t achieve this year. Marked off all the other boxes except for at least giving us a shot at Homestead.”

When asked if he would’ve done or approached anything differently throughout the playoffs, he pointed to stage points.