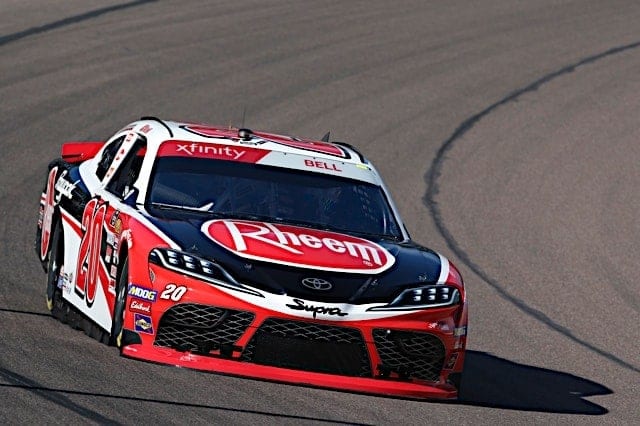 Christopher Bell posted the fastest speeds in both of the NASCAR Xfinity Series practice sessions on Friday (Nov. 8) afternoon for the Desert Diamond West Valley Casino 400.

Michael Annett was 12th on the scoring pylon, the slowest playoff driver. Austin Cindric was the fastest among the four drivers who turned 10 consecutive laps, averaging a speed of 127.812 mph.

First practice was halted for nearly 20 minutes after Joe Nemechek, driving the No. 74 for Mike Harmon Racing, lost an engine and subsequently slid into the turn 1 wall. Clean up from fluids laid down on the track caused the lengthy delay.

Bell’s speed in the second practice session of the afternoon was faster than his first practice speed, at 130.147 mph.

Chase Briscoe, who complained throughout the session of being too loose, was the slowest among the playoff drivers in 12th, with a speed of 128.622 mph.

Qualifying for Saturday’s event will begin at 12:35 p.m. ET on NBC Sports Network, followed by the race at 3:30 p.m. ET on NBC. Bell is the defending winner.