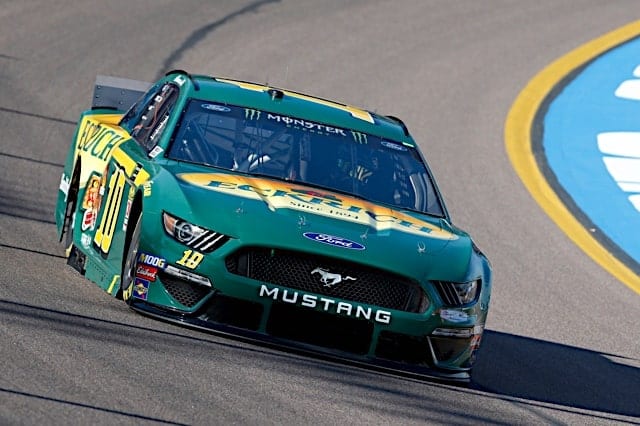 It’s time for a duel in the desert as the Monster Energy NASCAR Cup Series goes west to ISM Raceway. The Bluegreen Vacations 500 is set to roll on Sunday, Nov. 10 at 2:30 p.m. ET on NBC.

The Phoenix track is a flat, one-mile oval where drivers tend to cut corners, literally. Turn 1 has an apron with a lot of space for cars to try to pass. This feature, along with the PJ1 traction compound put down in the outside lane, creates more passing opportunities in what’s expected to be a multi-groove racetrack.

Even though some drivers have earned good finishes after starting deep in the field, eight of the last 10 ISM Raceway winners started in the top 10. You’ll want a mixture of lap leaders and others who could take advantage of misfortunes in your DraftKings lineup. Often, those drivers will be in the mid-to-lower price range (it’s just choosing the right ones).

Before we continue on to Sunday’s picks, I want to share last week’s results from Texas Motor Speedway.

Well, that was just lovely. At Texas, Denny Hamlin took a trip across the grass and hit the pavement in a spin which messed up his whole ride. While Hamlin did salvage 28th place, it hurt his DraftKings score. At least I got the winner (Kevin Harvick) right in this one.

The $1 Happy Hour tournament needed 286.75 DraftKings points to cash, while a single-entry double up needed 266.50. Hamlin’s wreck killed any chance for that to happen with this roster.

Now, on to this week’s picks!

Busch won the spring event at ISM Raceway, as well as last year’s playoff race. He’s also on an eight-race top-10 streak at Phoenix, in which he’s led nearly 500 laps. All but one of those races ended inside the top five.

Unfortunately, he’s had some not-so-good finishes in the playoffs: the Joe Gibbs Racing driver has only two top fives and four top 10s this postseason. That may be below expectations but he knows what to do to ensure his spot in the Championship 4. Since Busch is very good at Phoenix, he should have no trouble meeting his goal.

Harvick has been freaky fast in the desert; he has a track high nine victories here! Six of those win came within his 12-race top-10 streak. Additionally, Harvick has the best average finish among all active drivers. However, the recent reconfiguration has hurt his chances, leading just 111 laps since the fall 2016 event.

Still, Harvick does have momentum on his side. The Stewart-Haas Racing driver won last week’s Texas Motor Speedway event from the pole. He, and his teammates, led a majority of the laps in that race, proving they are still strong in the playoffs.

Harvick is locked into the Championship 4, so he might play it safe this week. That may take him out of contention for the win but his track history is too strong to ignore.

Almirola finished second last week to his cohort, Harvick, and led 62 laps. The SHR veteran is somewhat more risky at ISM Raceway since he’s had many finishes back in the pack. But he does have the speed as of late and is capable of performing at a high level.

Almirola’s track history is also good recently at Phoenix, as he has four consecutive top-10 finishes. Since Almirola doesn’t usually qualify well, he could earn you bonus DraftKings points with a top-tier performance.

Buescher may not have had the best career finishes at ISM, but he does have an 18th and 16th place in his last two races here. Both of those wound up several positions higher than where he started. The same can be said for this season, a strong year for Buescher, as he has many finishes in the teens.

However, a few times he’s qualified too well to be worth this price, so keep an eye on Saturday speeds. If Buescher qualifies 20th or below, then I will definitely want him in my roster.

Ty Dillon is my honorable mention because he tends to start mid-pack, but ends up in the teens. A good example of this trend is in this race two years ago where he began 29th and ended a surprising 11th. The Germain Racing driver remains a capable middle-tier selection while his team prepares to try and step up their game come 2020.

Also, Dillon mostly avoids giving DraftKings users a negative score. Since September, the Germain Racing driver has per-race totals mostly in the 20s or 40s. Hopefully, this week will land him on the higher end of the spectrum.

Nemechek is more of a dart throw. Last week at Texas, while filling in for Matt Tifft, Nemechek stayed out of trouble en route to 21st. That resulted in 31 DraftKings points, which is very good for his price point, for his Cup debut.

In the Xfinity Series, Nemechek finished ninth in both races at ISM. He also has good results in the Gander Outdoors Truck Series there, as he has two runner-ups and four top 10s in seven events.

Nemechek knows this place well, and though he isn’t in good equipment, a top-20 finish is still well within reach. That’s really all you need from a driver in this price range.