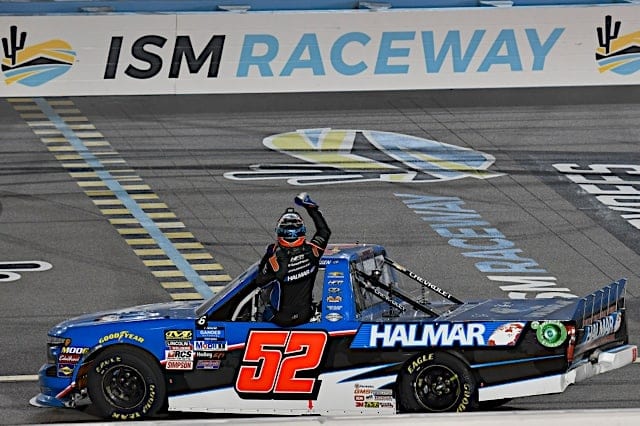 Friesen had to work hard to capture his first pavement win, however, as he was penalized for beating the polesitter, Austin Hill, to the start/finish line on the initial start.

The No. 52 team caught a break as the caution flew on lap 2, ironically for Jones, who spun on the exit of turn 2. Friesen was sent to the back of the pack for the restart and began his methodical climb back to the front.

On the lap 7 restart, Hill fired first but didn’t fire well and Ben Rhodes quickly drove away with the lead. Hill slowly slid back to sixth place.

Meanwhile, playoff drivers Ross Chastain, Matt Crafton and Brett Moffitt made their way inside the top 10. They took full advantage of the wide racing surface at ISM Raceway to pass their competitors.

Friesen made his way up to 21st before a second caution flag flew for Derek Kraus. John Hunter Nemechek was driving below Kraus as they entered turn 3, but the No. 8 truck bobbled and hit Kraus, sending him into the wall.

Many of the leaders stayed out, including the playoff drivers. Friesen advanced to 16th which helped propel him inside the top 10 before the end of the first stage.

Not only did Tyler Ankrum not earn any stage points, but he pitted multiple times during the caution break and was caught a lap down as he did not beat the pace truck to the pit road exit. Ankrum failed to recover and finished 26th, six laps down, ending his championship run.

Chastain struggled in stage two after his team changed only left-side tires. He exited pit road first but five trucks stayed out and in the chaotic restart, Chastain fell backward and out of the top 10. He would finish 14th in stage two. By virtue of points, Moffitt secured his bid to race for a championship at Homestead after the completion of the second stage.

The three remaining spots in the Truck Series Championship 4 would be decided by Chastain, Crafton, Friesen, and Hill.

A first-lap crash in the final stage was the only interruption in the final 51 laps. Sam Mayer overdrove turn 3 and collected Nemechek.

The race restarted on Lap 107 with Jones in the lead, but Friesen’s march back to the front was completed when he muscled his way around Jones through turns 1 and 2. Jones’ final fight came with four laps to go but Friesen put together a series of good corners to pull away. Jones went high in turns 3 and 4 with two laps to go which secured Friesen the win.

He credited his spotter Rick Carelli and his crew chief Trip Bruce for keeping him calm following the penalty which sent him to the rear of the field.

Joining Friesen and Moffitt in the Championship 4 race at Homestead next Friday (Nov. 15), will be Chastain and Crafton.

Chastain finished the race in ninth, 13 points above the cutoff and Matt Crafton’s sixth-place finish, coupled with his 17 stage points was enough to surpass Hill for fourth place.

“We had [nothing] to lose and a lot to gain,” Crafton said. “We fought hard and we fought really hard each and every stage. We didn’t want to stage race tonight but we had to and at the end of the day that is what got us in.”

Throughout the final stage, Crafton followed his teammates Rhodes and Grant Enfinger and rode a six-point lead over Hill who was struggling with an ill-handling truck and finished 13th

The NASCAR Gander Outdoors Truck Series will decide the 2019 champion next Friday at Homestead-Miami Speedway. The race coverage begins at 7:30 p.m. ET on FS1.