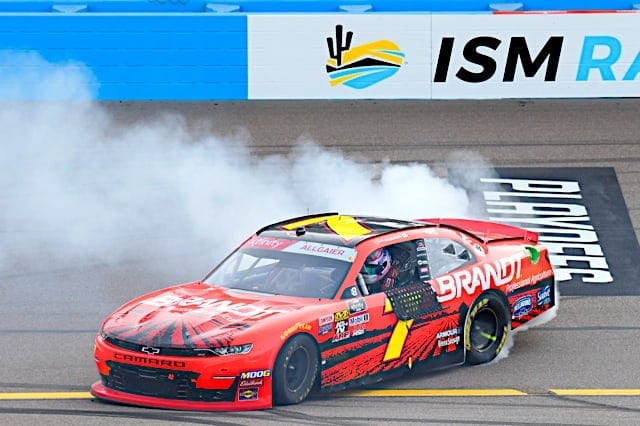 Entering Phoenix, Allgaier needed a solid day, and no drivers between fifth and eighth in the championship standings to win the race. Instead, the No. 7 team dominated the second half of the race — leading 85 laps — en route to his first victory in 39 starts.

“To do what we’ve done all year, to have the speed that we’ve had but not being able to pull it off has been disappointing,” Allgaier said post-race. “These guys have rallied behind it. We said when we came in here we needed to get a win so we can get to Homestead and we did that.

“We had a hot rod today. I don’t think we could have beat the [No.] 20, but when he made his mistake we capitalized on it. That’s what it’s all about.”

Allgaier began the 200-lap race from fifth position. By the end of the first stage, the No. 7 car jumped up to second, behind Christopher Bell. Stage two looked similar, with the No. 20 car leading wire-to-wire, picking up another stage victory.

During the stage break, Bell and Austin Cindric were caught speeding on pit road. After leading 93 of the opening 95 laps, the No. 20 team restarted in the back, and raced inside the top 10 in less than 10 laps after the restart. However, a lap 117 spin ended Bell’s chance of winning, after going one lap down. The No. 20 finished 16th, though was locked into Homestead virtue of a win last week at Texas Motor Speedway.

Cole Custer took the checkered flag in second, and closed in on Allgaier for the lead in the waning laps, losing out by less than one second. Tyler Reddick finished third, pointing his way to Homestead, while John Hunter Nemechek and Zane Smith rounded out the top five.

Cindric was the first driver in the finishing order of drivers that needed to win in sixth. Chase Briscoe entered the race needing a perfect race. And despite leading 14 laps, the No. 98 Ford faded to eighth come the checkered flag — the first driver on the outside looking in for Homestead.

When Bell spun, Briscoe and others took fuel only, hoping a caution would come out late to put on their final set of sticker tires. Running the majority of the opening two stages around fifth, the No. 98 team needed to do something different.

“A caution would have been nice there at the end,” Briscoe said. “We just tried something different, obviously it didn’t work out for us, kind of like this whole round of the playoffs. … I don’t want this one race or this whole round define who we were. I feel like we proved in the last half of the season that we were capable of being that fourth guy, we just didn’t get it done.”

In the end, Bell, Allgaier, Custer and Reddick have a shot at the championship next Saturday (Nov. 16) for the title. Reddick is looking to become the first driver in series history to win consecutive titles for different organizations.