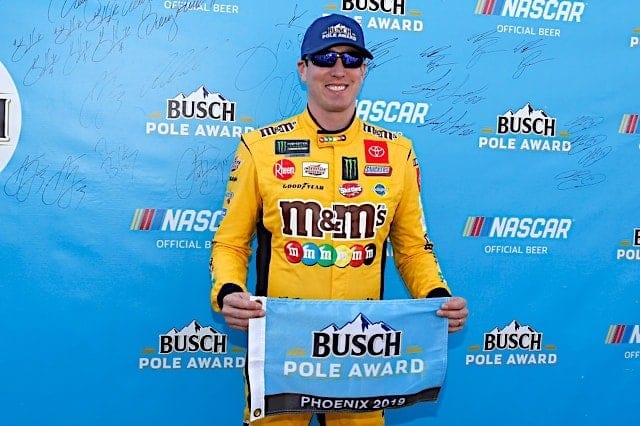 Based off the qualifying results for the Bluegreen Vacations 500, the eight Monster Energy NASCAR Cup Series drivers still in the playoffs will be forces to be reckoned with in the final race of the Round of 8. They will all start inside the top 10 for Sunday’s (Nov. 10) event at ISM Raceway. In fact, first through seventh went to playoff drivers.

Best of the playoff drivers was the polesitter Kyle Busch. Busch won the pole with a lap of 140.116 mph. He is currently 22 points to the good to advance to the Championship 4 next Sunday at Homestead.

Starting on the front row beside Busch will be Joey Logano. Logano missed the pole by 0.067 seconds. He is currently the last driver above the cutline with a 20-point margin.

Joe Gibbs Racing teammates Denny Hamlin and Martin Truex Jr. make up the second row, starting third and fourth, respectively. Truex is locked into the Championship 4 with his victory at Martinsville Speedway two weeks ago Hamlin enters the race fifth in points, 20 below the cutline.

Elliott’s No. 9 Chevrolet was one of four cars to fail pre-qualifying inspection twice. As a result, Elliott will lose his car chief for the rest of this race weekend. Additionally, he will lose 15 minutes of practice at Homestead-Miami Speedway next weekend.

Kevin Harvick will start seventh. He, too, is locked into the Championship 4 with his win at Texas Motor Speedway last Sunday. Last of the playoff drivers was Ryan Blaney and he will start 10th.

The two non-playoff drivers inside the top 10 are Kurt Busch in eighth and Erik Jones ninth.

The other three drivers whose cars failed pre-qualifying inspection twice were William Byron, Matt DiBenedetto and Ross Chastain. Like Elliott, they will lose their car chief for the remainder of the race weekend and lose 15 minutes of practice at Homestead-Miami Speedway.

Thirty-nine drivers were entered for the Bluegreen Vacations 500 so no one failed to make the race.