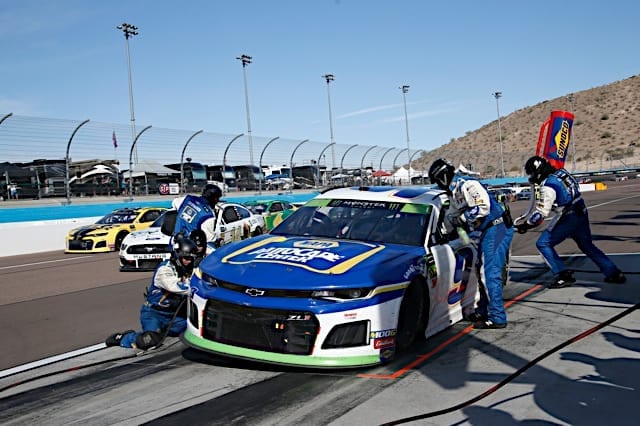 Chase Elliott will lead the field at the drop of the green flag (Photo: Nigel Kinrade Photography)

It was truly win-or-go-home for Chase Elliott in the Monster Energy NASCAR Cup Series heading into ISM Raceway Sunday (Nov. 10). Two poor finishes in the Round of 8 made a victory the only way he could qualify for the Championship 4 at Homestead-Miami Speedway.

It wasn’t meant to be. While running inside the top five on Lap 166, his No. 9 Hendrick Motorsports Chevrolet backed into the wall, ending both his afternoon and 2019 title hopes.

.@ChaseElliott's hopes of winning a @NASCAR championship will have to wait until next year.

“A continuation of our first two weeks, unfortunately,” Elliott told NBC Sports. “We had a decent NAPA Chevy today. Really tough in traffic to catch guys and pass them. We were in position to run solid. Not sure why we had a tire go down, but that’s what happened at least. These last three weeks have been pretty rough so hopefully Homestead goes better. Get a good look for next year.”

Elliott finished 36th at Martinsville, 32nd at Texas and will have another finish outside the top 30 when the checkered flag flies in Phoenix.

It ruined what was a spirited battle to try and pull off the upset. Elliott, who has never won at Phoenix, was in a long battle with Denny Hamlin for second during the second stage. He held the No. 11 off until three laps remained in stage two, keeping his track position until Lady Luck had other ideas.

“You’re racing really hard and it’s like slow motion,” he said. “It’s hard to make a lot happen in a little amount of time. It was a tough race. Enjoyed racing toward the end of that stage. We were racing hard […] you never want to have a round go like that.”

Elliott will now have to settle for a potential fourth straight top-10 points finish depending on next week’s finale at Homestead-Miami Speedway. His DNF also means Hendrick Motorsports is shut out of the Championship 4 a third straight year.

I bet all the #9 flags in the trailer park are at half mast.

Chase did what Chase does best.