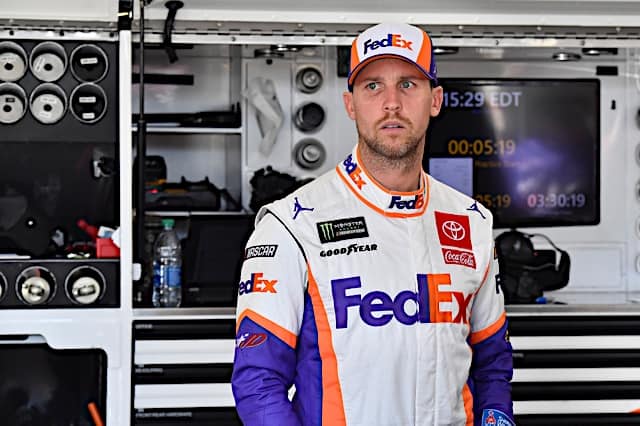 Needing to close out a victory late in Sunday’s (Nov. 10) race at ISM Raceway, Hamlin prevailed on a restart with three laps to go, holding off fellow playoff drivers Kyle Busch and Ryan Blaney.  The win allows Hamlin to advance to the final round of the playoffs next week as a championship contender.

In the context of the 2019 season, Hamlin’s victory should not be a surprise.  The No. 11 team came out of the gates strong by winning the Daytona 500.  That win set the tone for a strong rebound season by Hamlin, who won for more races prior to his arrival at ISM.  Most weeks, he’s looked like a championship contender.

However, Hamlin has looked like a championship contender before.  In 14 full-time seasons in the Monster Energy NASCAR Cup Series, Hamlin has been on the cusp of winning a title before.  But whenever he has been close in the past, problems in the postseason have always dashed his championship dreams.  In 2017, payback from Chase Elliott for a run-in at Martinsville Speedway resulted in Hamlin’s elimination.

Mechanical gremlins at Martinsville in 2012 put the championship out of reach that season.  Even in 2014, the last time Hamlin went to Homestead-Miami Speedway as a championship contender, poor pit strategy by the No. 11 team prevented him from making a final push to win the race.

Yet all of those misadventures pale in comparison to 2010.

Going to Phoenix that season, Hamlin had already earned eight wins, including the previous race at Texas Motor Speedway.  Momentum was on his side, and he held a 33-point advantage over second-place Jimmie Johnson.  For most of the Phoenix race, Hamlin took care of business, leading 190 laps.  But in the closing stages of the race, the No. 11’s fuel tank ran dry.  Hamlin had to make a late pit stop which dropped him to 12th in the final finishing order.  Johnson, meanwhile, saved enough fuel to get to the finish line in fifth.

The images of Hamlin slamming the steering wheel inside his car and sitting on pit road after the race told the tale.  He was beat.  It didn’t matter that there was one race left.  It didn’t even matter that he still held a 15-point advantage on Johnson.  The missed opportunity at Phoenix was going to be too much for Hamlin to handle.  One week later, Homestead was a disaster.  After qualifying poorly, Hamlin spun out early in the race trying to work his way through the field.  He never contended for the win, and Johnson cruised to his fifth straight championship.

The memories of 2010 never completely faded for the No. 11 team.  Ever since then, the knock on Hamlin has been that he couldn’t handle the pressure of a tight championship battle.  Those missed opportunities in 2012, 2014 and 2017 appeared to back up that belief.  Last year, when Hamlin was fighting through a long winless slump, there were calls for Christopher Bell to take his seat.  The argument was that Hamlin had peaked and was unlikely to contend for another championship as he approached his 40th birthday.

What a difference a year makes!  Not only is Hamlin winning races on a regular basis, he has been able to advance to the championship round of the playoffs, despite facing some pressure-packed circumstances.  Two weeks ago, at Martinsville, Hamlin ran afoul of old rival Joey Logano.  The two racers scuffled on pit road, though both of them left the Virginia short track in good shape points-wise.  It was at Texas last week when Hamlin ran into real trouble.  Just before the end of the first stage, Hamlin spun off of turn 4 and went sliding through the infield, damaging his splitter.  A 28th-place finish dropped the No. 11 20 points below the playoff cut line.  Once more, it looked like Hamlin’s championship hopes were coming unraveled.

The pressure was on Hamlin to have a strong performance at ISM on Sunday.

Logano and Kyle Busch, who Hamlin was racing for the last spots in the final round, scored enough stage points early in the race that they effectively forced Hamlin into a must-win situation.

Logano, in particular, looked very strong during the second stage.  As much as Hamlin has struggled to put complete races together in the playoffs, Logano and the No. 22 team have been among the best at stepping up their game during the postseason.

But in the second half of the race, Hamlin flipped the script.  Taking the lead away from Logano on lap 177, Hamlin used a long green-flag run to stretch his lead out.  As Hamlin drove away from everyone, Logano slipped backward, ruining any chance he had to win the race.  Hamlin appeared to have it in the bag, but a late caution on lap 304 threatened to ruin his race.

Taking two tires to maintain his track position, Hamlin needed a perfect three laps to secure the win.  Despite struggling on restarts earlier in the race, Hamlin nailed the final restart and sped off to victory, allowing him to advance to Homestead as a championship contender for the first time in five years.

“This race team works so hard,” Hamlin said, “and they deserve to (go to Homestead).  I put them in a bad hole last week, and I told them today in the meeting, I just said, I’m going to give everything I’ve got to make up for the mistake I made last week, and that’s all I got.

“I’ve been through so many playoffs and so many things that go wrong,” Hamlin added.  “This year I’m always waiting on the right thing for the next right thing to happen.”

The fight is not over just yet for Hamlin.  Winning the championship will probably require a victory at Homestead.  To do that, Hamlin will have to defeat three very capable drivers who have all won a title under the elimination-style format before.  B

ut this time, Hamlin has a more positive mindset and appears ready to handle the pressure.  All the No. 11 team needs is a chance, and Hamlin’s performance at ISM has provided one.

I didn’t make it thru the entire race. Left with about 150 laps to go. One of the most boring races I’ve watched in a long time. I guess a race that only has 10 cars being covered just doesn’t make things compelling for me. I don’t even care which JGR car wins the crapshoot ‘title.

Next week the event will have four cars. I figure the Gibbs cars will qualify top three and it won’t take long for the Fib Four to be up front with none of the other cars allowed to pass them. If we’re lucky there will be a GWC and the Reverend Joe cars will take each other out and Harvick will win. Let’s start a poll to predict which car that is six or more laps down brings out the caution with less than 10 laps left to remind us of Brian’s legacy.

And what is with the media all but proclaiming the Hamlin is going to be the ‘champ? I don’t remember anyone crying like this for Mark Martin when he kept finishing second multiple times, and that was when a title went for a whole season and meant something!