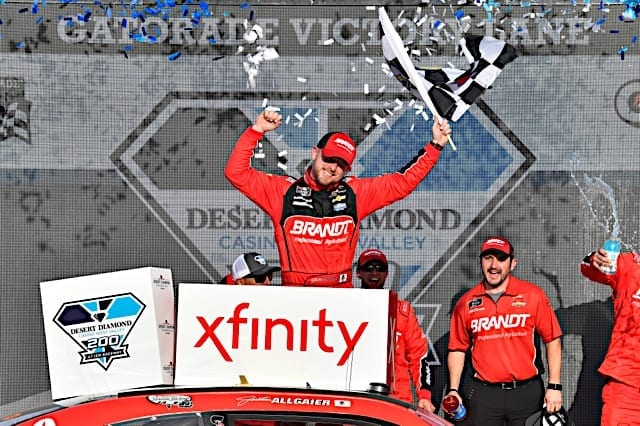 Denny Hamlin has built a career living off emotion. The highs have been incredible: two Daytona 500s, two Southern 500s and an eight-win season in 2010. His 37 Monster Energy NASCAR Cup Series victories are the most of any active driver without a championship.

But too often, a crisis of confidence has carried over onto the racetrack. The eight-win 2010 campaign proved no match for the mind games of Jimmie Johnson, as Hamlin lost the title during Homestead-Miami Speedway’s finale. Other opportunities in 2012 and 2014 never panned out, leaving him the equivalent of a modern-day Mark Martin. Would Hamlin ever get another chance at a championship? It certainly didn’t seem like it when crew chief Mike Wheeler was replaced after the 2018 season finale with Chris Gabehart.

But Joe Gibbs Racing on Sunday (Nov. 10) proved they knew exactly what they were doing. Left for dead after a Texas Motor Speedway spin last weekend, Hamlin roared back to win the Bluegreen Vacations 500 at ISM Raceway in dominating fashion. A new head wrench wouldn’t let the emotions get to Hamlin’s head. Instead, Gabehart kept his driver focused and Hamlin did the rest, taking control early in the final stage and cruising to a lead of almost half a lap at one point. It’s what they’ve done all season, surprising chemistry that has made them one of the most formidable combinations in the Cup Series.

The victory was Hamlin’s sixth of the season and ensured the four drivers with the most wins qualified for next week’s Championship 4. Three of those were from JGR as Hamlin joined Martin Truex Jr. and Kyle Busch in the field. A win at Texas Motor Speedway put Kevin Harvick along with them in the final four, leaving Joey Logano, Ryan Blaney, Kyle Larson and Chase Elliott on the outside looking in.

Logano was clearly the most disappointed of all, winning stage two but losing the handle on his No. 22 Ford as the race went on. But this race was about Hamlin more than the 2018 reigning champion, putting a decade of struggles aside to give himself one last shot at the title this decade.

“It doesn’t guarantee a championship,” Hamlin said of his place in the Championship 4. “But it’s a chance. You live to fight another day and that’s all you can ask for.”

Now, just one race stands between Hamlin changing the narrative on his racing career for good. –Tom Bowles

It took nine months, but Justin Allgaier finally found victory lane, picking up his first victory of the campaign in the penultimate race of the season at ISM Raceway.

Over the past three seasons, Phoenix has been Allgaier’s personal playground. Some come and go, but the No. 7 is the model of consistency at the track with a pair of victories. In addition to the win, Allgaier locked him into the championship race at Homestead, along with Christopher Bell, Cole Custer and Tyler Reddick. And boy, what storylines there are entering championship weekend.

Allgaier is a crafty veteran looking for redemption from a disappointing end to what was a career season in 2018. Bell aims to win his second NASCAR championship and is looking to one day be the first driver to win a title in all three national touring series. Reddick hopes to be the first driver to win consecutive Xfinity titles with two different organizations. Custer is looking to bring back his Homestead dominance from the past two years and secure his first title.

From the top down, this is the most impressive grouping of Championship 4 contenders. So it wouldn’t surprise me to see them finish first through fourth next Saturday in South Beach. – Dustin Albino

Stewart Friesen became the only Truck Series driver locked into the Championship 4 to win a race in the Round of 6 with his second 2019 victory Friday night at ISM Raceway. Leading the entire final 44-lap green-flag run, the driver of the No. 52 Chevrolet notched his spot in the championship battle next weekend at Homestead-Miami Speedway.

Defending champion Brett Moffitt will attempt to become the second driver to win back-to-back titles, but if he does accomplish the feat, it will be with two different teams. Matt Crafton and Ross Chastain, who didn’t declare for Truck Series points in May, will join Friesen and Moffitt as the four drivers fighting for the title at Homestead-Miami Speedway next weekend. – Beth Lunkenheimer

This year has not been the best year for SRO America.  Their headlining series, Blancpain GT World Challenge America, dealt with shrinking fields throughout 2019.  A field of 20 at the start of the season fell to as low as 12 at times.  By the end of the season, there were only four cars in the Pro class.  The offseason has not been any better as scheduling upheaval has reigned supreme.

For 2020, SRO head Stephane Ratel originally announced a schedule with seven weekends of racing back in July.  This was to be capped off with the new Indianapolis 8 Hours, a race that will be part of the Intercontinental GT Challenge.  There were gripes about costs.

Then, Circuit of the Americas was dropped from the schedule (at the time, it didn’t have a set weekend) and the season was cut to six weekends starting in May.  In addition, the Pro class was outright dropped, making the series Pro-Am only.

Last week, they made another change, putting Circuit of the Americas back on the schedule the weekend of March 7-8 to start the year after receiving feedback from stakeholders.  The Indianapolis 8 Hours is now a non-points event, but all Blancpain GT World Challenge America teams are invited to compete.

It says a lot that even the series’ own Twitter feed is a bit overwhelmed by this.

Due to popular demand, we are back kicking off the 2020 GT World Challenge America season at Circuit of The Americas. We promise this is the last schedule update ?

Apparently, there won’t be any more schedule changes over the next four months before the season gets underway.  Regardless, there will be a number of people looking forward to the State of the Series presentation, which will take place on Dec. 12 at the PRI Show in Indianapolis, to get a better idea of the series’ direction going forward. – Phil Allaway