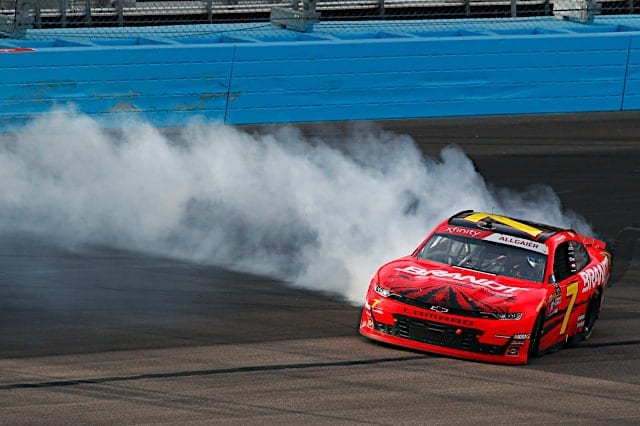 There was a brief period during the final stage of the Desert Diamond Casino West Valley 200 at ISM Raceway when it looked like Justin Allgaier was going to have the most logical possible end to a frustrating season. Though Allgaier entered the race in a safe spot to advance to the Championship 4 on points, he suddenly found himself back in a bit of traffic with Austin Cindric, one of the drivers who could eliminate him with a win, up front.

If you followed the NASCAR Xfinity Series at all this year, you know the drill for Allgaier. Five times a winner in 2018, he went the entire way to Phoenix without visiting victory lane, runner-up five times but always seeing victory elude his grasp even on days his No. 7 Chevrolet looked plenty fast.

But as climate-appropriate, as it would have been for Allgaier to end up snakebitten in the desert, this particular afternoon was different. Buoyed by fresher tires, Allgiaer made his way first by Brandon Jones, then quickly by Cindric as well (with a bit of contact he later apologized for over the radio).

Despite ISM’s reputation for late-race cautions, lap after lap ticked off under the green flag, and Allgaier remained in the lead. Cole Custer was coming on late, but for once, everything worked out in favor of the JR Motorsports veteran.

As it turned out, even if Custer had passed him toward the end, Allgaier would have been fine. He didn’t need the win to compete for the title at Homestead next week. Did he need it for the benefit of himself and his team?

“It means a lot,” Allgaier said after taking the checkered flag and ending his 39-race streak of futility. “To do what we’ve done all year, to have the speed that we’ve had but not been able to pull it off, it’s been disappointing, and these guys have rallied behind it. We said when we came in here, we needed to get a win to go on to Homestead, and we did that.”

Given the way that Custer and Reddick have performed at Homestead in the past and how dominant Christopher Bell has appeared when he’s had his fastball, Allgaier will be the longest shot for the championship. That hardly matters, as he’s in the hunt in very legitimate fashion, a refreshing change from what he’s gone through for so many months.

Say what you want about the NASCAR playoff system, but the cutoff race for the Championship 4 ensured that the four drivers who deserved a shot to race for a title will do so. There can be little argument that Bell, Custer and Riddick should be there, winning 20 races between them and at least five each.

The fourth spot was a little trickier to say for certain until Allgaier claimed it in emphatic fashion, but he had more top-10 finishes than anyone but Reddick and Chase Briscoe and more top-five results than every driver but Reddick and Bell. If you’re a fan of the kind of consistency that older points systems used to reward, he fits to a tee.

So unless you would prefer a true underdog have a chance to win it all, ISM Raceway did a nice job narrowing the field to four worthy contenders. Also, restarts were fun, with cars everywhere with pavement on it. That was good because most of the rest of the race falls into …

For the sake of switching things up, it’s pretty cool that NASCAR’s 2020 championship weekend is coming to ISM Raceway. Alas, except for some bumping early in the race and those aforementioned restarts, the Desert Diamond Casino West Valley 200 didn’t do much to provide hope that next season’s finale will be a thriller.

Bell led nearly every lap of the first two stages, sucking the drama out of them throughout. Some of that could very well have just been Bell being Bell, but once Allgaier made his way to the front, there was little intrigue unless another caution flag flew or someone ran out of gas. Neither happened.

Allgaier did have to make an on-track pass to get to the point, but that was more a result of differing tire strategies than anything else. Unless NASCAR is going to dictate that drivers start on different kinds of tires in 2020, we could end up watching a game of follow the leader for next season’s crown.

It’s not ISM Raceway’s fault, as the track did its best to try to improve the racing with liberal use of traction compound on the upper groove. It appeared to give the top dogs more options for passing the mid-pack but wasn’t too helpful manufacturing side by side action for the lead. Here’s hoping that another year gives the racing surface time to change for the better.

Lest anyone think an Xfinity Series championship is a foregone conclusion for Bell, Phoenix was a reminder of how it can go wrong for the No. 20 team if it fails to execute at Homestead. And the driver had to shoulder the majority of the blame this time out.

First, Bell got penalized for speeding on pit road during his stop at the end of the second stage. That dropped him back in traffic, and while trying to zoom back up through the field, he went around and effectively ruined his day.

The No. 20 goes around during his march to the front in the final stage. pic.twitter.com/W33kA0PsM9

Bell finished 16th in a race where he had the best car. If he does something similar next week, he’s going to head to the Cup Series next year full of regrets over what could have been.

Gray Gaulding has been steadily improving over the last six or so races, and on a day when the cream pretty much rose to the top, he had to be pleased by coming home 12th. Yes, that was a lap down, but it was his best result since a seventh at Las Vegas and just the sixth time in 2019 he finished at least that high.

“Not only a chance at a championship, but to do it with momentum from a win. I mean, that’s special.” – Justin Allgaier

“A caution would have been nice there at the end. We just tried something different, and obviously it didn’t work out for us.” – Chase Briscoe

“Great run through the season. We’re looking at Homestead for a race win, and we want to be fifth place in points. That would be a heck of a run for us after not making the playoffs last year.” – Michael Annett

“We didn’t lose sight of what’s important. We’re the last one in going to Homestead, so that makes us the underdog again, but I’m OK with that.” – Tyler Reddick

Allgaier’s win was the story, and there were some times during the final stage where strategy made longshot bids by Cindric and Briscoe viable. But the first two stages were dull, and it would have taken extending the race by another six or more laps, probably, to see if Custer had anything for the eventual winner.

Again, that wasn’t necessarily a horrible thing all told, since the Championship 4 is as solid as can be. But if Bell hadn’t run into trouble, it’s likely that would still have been the case and there wouldn’t have been much to talk about at all. That’s sub-optimal.

The long and winding journey of the 2019 NASCAR Xfinity Series season comes to its close at Homestead-Miami Speedway in the Ford EcoBoost 300. The Big 3 and Allgaier will duke it out for a championship, with the highest finisher among them taking the honors. Given the success of the drivers involved, it’s very likely to take a win to claim the title. Reddick knows that only too well, as he claimed victory last year to complete an unlikely championship campaign that saw him win only the first and last races of 2018.