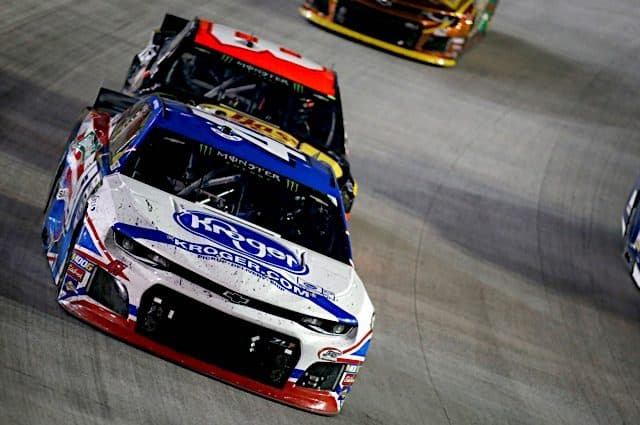 Beside the Rising Tide: They Don’t Make Rookies Like They Used To

As the NASCAR season winds down, the tension becomes even more palpable. After all, the point standings for the coveted award are even closer than the battle for top spot in the Cup Series In fact, as this is written, Ryan Preece and Daniel Hemric are separated by just 10 points for top spot atop this year’s Rookie of the Year standings.

Both have a single top-five finish in the Cup Series this season. Preece finished third at the Talladega spring event while Hemric finished fifth in the same race. Preece has three top-10 finishes to Hemric’s two. Hemric won the pole at Kansas last month. The only other driver eligible for this year’s ROTY honors is Matt Tifft, who is currently sidelined with health problems so we’ll just wish him a speedy recovery and move along.

As you’d guess with the points standings so close, both Preece and Hemric are also very close in their average finishing position this year, both averaging a 23rd-place finish heading into the season finale at Homestead-Miami Speedway. Talk about a nailbiter? This fight has become a national obsession.

When you walk into the grocery store you are faced with aisle after aisle of commemorative packaged products featuring the grinning faces of Preece and Hemric. Wally World’s, coast-to-coast, have to have armed guards on duty as they restock their toy departments with diecasts of both drivers’ cars. Faced with the uncertainty, President Trump has been forced to issue an invitation to both Preece and Hemric to visit the White House if they prevail in this epic battle. Loser has to mow the lawn at 1600 Pennsylvania Ave while the other feasts on hamberders.

No sooner did the results become official for the Phoenix race Sunday then frenzied wire service employees sent out urgent electronic missives detailing the new rookie point standings to fans frantic for the updates. Here at Frontstretch’s palatial new headquarters in Honolulu, we gathered as a group around the teletype, teeth gritted, foreheads bathed in sweat, and fists clenched with anticipation. A mighty roar went out as the figures were updated and one junior staffer took the news so badly she dove out an 18th floor window. Officially, she jumped. I’m told she might have had some help jumping.

OK, none of that really happened. If Frontstretch did in fact have a world headquarters it’d probably be located somewhere in the swamps of Jersey. And even given my age, I’ve finally warmed up to using a PC and the Internets to share info rather than a teletype.

If you were surprised that NASCAR still has a Rookie of the Year challenge don’t feel bad. I had to Google it to check. They just don’t make rookies like they used to back when the racecars had chrome bumpers and the grandstands had fans sitting packed cheek-to-cheek.

Awkwardly enough, if Hemric does win the title, he’s already been notified by Richard Childress Racing his services will no longer be needed in 2020. Preece is said to be lined up for another year at JTG- Daugherty Racing. Perhaps Childress could fix Hemric up with a “I won NASCAR 2019 Rookie of the Year and all I got was this t-shirt” consolation prize?

Naturally, there have been other less than stellar ROTY battles in NASCAR before. Next year’s Rookie battle already appears to be a bit more intriguing with Christopher Bell and Tyler Reddick both having already declared for the honor. Both Bell and Reddick have really lit things up this year in the Xfinity Series, as has Cole Custer, whose plans haven’t been officially announced for next year.

Reddick has five wins this year, Bell has eight and Custer has seven. Intriguingly Reddick will race an RCR Chevy, Bell a JGR Toyota and Custer, if he makes the cut, most likely a Ford, and most likely out of the Stewart-Haas Racing stable. Custer’s father is part of the senior management at SHR. Perhaps Ford is holding Custer out for a run at the 2021 ROTY against what will presumably be a weaker field in a completely re-designed racecar anyway.

Like the stock prospectuses all read down in the fine print “Past performance is no guarantee of future success.” Just because a driver was hot as a rookie doesn’t mean he’s going to win a Cup title anytime soon. Ricky Stenhouse Jr. comes readily to mind. After winning back-to-back Xfinity titles (and eight races) in 2011-2012 Stenhouse backed it up with a Cup Series ROTY title in 2013. Yep, Stenhouse was the next big thing — the up and coming young talent that would fill the void left by Mark Martin (who never won a Cup crown or ROTY honors), Jeff Burton, Carl Edwards and Matt Kenseth at Roush Racing as the team descended into mediocrity.

In fact the last ROTY honoree who went on to claim a Cup title was Joey Logano, who won ROTY in 2009 and became Cup champion last year.

Over the years NASCAR has used various parameters for determining the Rookie of the Year. Originally, an unnamed bunch of NASCAR executives sat down and decided who deserved the honor. In 1954, they chose Blackie Pitt. They didn’t bother picking a ROTY in 1955 or 1956, before agreeing on Shorty Rollins in 1957. My guess is even if you’ve never heard of Blackie or Shorty, but you may have heard of the next two winners of the NASCAR ROTY honors. Richard Petty won the prize in 1959 then, going on to claim 200 wins and seven championships. David Pearson won the ROTY title in 1960 on his way to 105 wins and three championships. You may be surprised to learn that Wendell Scott was the 1961 ROTY. Given the ways and mores of the era it’s pretty remarkable that happened.

Various points plans and eligibility rules for ROTY have been used. Originally, a driver could run no more than five Cup races in a season without losing his eligibility. That number was then raised to seven. Drivers had to declare they intended to join the fray and during some seasons run decalage to that effect on their cars. The internet isn’t big enough to recall all the points schemes used to select a ROTY. Starting last year, the same Cup Series race points that in the overall standings decide Rookie of the Year. That eliminates as somewhat awkward possibility that’s happened several times where a driver wins the ROTY trophy despite finishing lower in the standings than a rival rookie.

Harvick is a member of another even more exclusive group. He won a Cup race (two of them actually) during his rookie title season. Other members of the club include: Davey Allison who also won twice as a rookie and Tony Stewart, who actually won three times during his ROTY season. Dale Earnhardt managed to win a race at Bristol during his ROTY season and won a Cup title the following year. Matt Kenseth scored his first win (World 600) as a rookie. Other drivers have won as rookies but did not go on to claim ROTY honors during seasons with a particularly rich crop of newcomers. Jamie McMurray won at Charlotte in his third Cup start ever but was filling in for an injured Sterling Marlin and thus wasn’t eligible to compete for ROTY.

It should be noted that 1989 Busch Series champion Robbie Moroso was awarded the Cup ROTY title posthumously after a highway accident cost him his life late in the 1990 season.

You’ll note some pretty big name drivers never earned the ROTY trophy. A lot of folks think Dale Earnhardt Jr. did, but in fact Kenseth edged him for the honor in what might have been the last season fans in general paid attention to the ROTY battle. Jimmie Johnson finished runner-up to Ryan Newman in 2003 despite Johnson scoring three wins to Newman’s one that year. Bobby Labonte was never ROTY, finishing second to Jeff Gordon in a very deeply talented rookie class of 1993. Darrell Waltrip finished second in ROTY balloting to Lennie Pond in 1973.

The list of drivers chosen as Cup ROTY who enjoyed some success but no championships includes Mike Skinner, Johnny Benson Jr., Ricky Craven, Jeff Burton, Bobby Hamilton Sr., Sterling Marlin, Geoff (then Jeff) Bodine, Ricky Rudd and Donnie Allison. Oddly enough, Bobby Allison was never ROTY. He competed in eight races in 1965 which cost him his rookie eligibility going forward) Allison did win three races in his first full-time year in the Cup Series. He finished 10th in the points that year. Coincidentally enough no father/son or pair of siblings have both won ROTY.

Over the years the career path of a stock car driver has changed considerably. Back in the day a driver would often take a ride with a non-competitive team just to get a foot in the door. If that driver then routinely finished better than anyone could anticipate in the lesser equipment he might than land a ride with a semi-competitive team. The move up to a big league championship team with top caliber equipment was the ultimate goal, but one that many drivers never achieved. Then, as now, there’s always been more talented drivers than there are seats that need to be filled.

In 1979, Dale Earnhardt won at Bristol and went on to win ROTY honors as noted above. Earnhardt was actually forced to sit out four races after a wreck at Pocono Raceway. The Intimidator in Training managed to land a full-time ride for 1980 with Rod Osterland’s team because Osterlund’s primary driver at the time, Dave Marcis, wanted no part of running as part of a two-car team and potentially getting bounced to second banana status. Earnhardt went on to win the 1980 Cup championship.

I’d guess that despite his ROTY prize in 2018 Willian Byron will not go on to claim seven Cup championships. Whether Preece or Hemric wins the honor this year, I don’t see either of them becoming the first driver to claim eight Cup titles. But then again, you never can tell. Nobody thought Earnhardt was going to amount to much of anything in 1979 either.

Matt joined Frontstretch in 2007 after a decade of race-writing, paired with the first generation of racing internet sites like RaceComm and Racing One. Now semi-retired, he submits occasional special features while his retrospectives on drivers like Alan Kulwicki, Davey Allison, and other fallen NASCAR legends pop up every summer on Frontstretch. A motorcycle nut, look for the closest open road near you and you can catch him on the Harley during those bright, summer days in his beloved Pennsylvania.
Previous The Big 6: Questions Answered After the 2019 Bluegreen Vacations 500
Next The Underdog House: DiBenedetto of the Desert