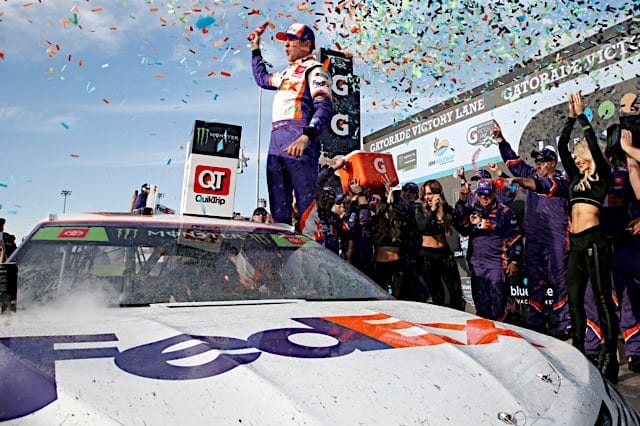 ONE: The Championship Four

All week long, conventional wisdom suggested that Kyle Busch (+22 points up on fifth place) and Joey Logano (+20 on fifth) would secure their berths alongside Martin Truex Jr. and Kevin Harvick in the final four for the second straight season. While each of the four drivers below the cut line prior to the Phoenix race could at least highlight a data point or two as to their chances to make it to Homestead-Miami Raceway, it seemed certain that only a win would do. And so it proved for Denny Hamlin a result of something Steve Letarte said: “In my mind, clearly the biggest win of his career.”

Or “a walk off grand slam,” as Dale Jr. put it. For the Joe Gibbs Racing veteran, it was redemption for 2010 when an unexpected late race pit stop saw a big points lead dissipate. Hamlin showed his clear displeasure, launching a water bottle at his car post-race. Harvick and Jimmie Johnson got under his skin in the pre-race build up media availability; Hamlin qualified poorly, running a line he hadn’t tried to any great degree in practice and spun early trying to make up lost positions. Hamlin recovered to finish 14th, but Johnson’s second-place effort saw him cruise to an incredible fifth straight title (2006-2010). As a collective unit, Sunday’s championship challengers hold positions one through four in wins, top fives, top 10s, and crucially, average finish, so it’s hard to argue (Logano being the honorable exception) that this four isn’t the quartet that deserves to run for the title. Now we just have 400 miles left to determine who’ll be the champ.

In another sign of just how miniscule the difference between success and failure is in NASCAR, a simple air pressure adjustment for Logano saw the 22 go from, to use his own words, a “winning car to one that can’t stay on the lead lap to one of the tightest things I’ve ever driven.” Ninth place on the day at ISM Raceway saw Logano miss out on a return to the Championship Four by what ultimately amounted to just a handful of on-track positions, and with it the chance to defend the title he won in thrilling fashion in 2018 was eviscerated. And when you look ahead to next weekend, the one driver on the outside looking in with the best case to be there would absolutely be Logano. In fact, under the traditional points system, Logano would be heading to Florida on Sunday with a four-point cushion over the field, in control of his championship destiny. Instead, he’ll be racing for a best of fifth place. Consistency is important but not paramount under the winner takes all system. And for Logano there will be one last chance at a race-winning trophy — the 399th start of his 12-year Cup career to date.

THREE: One Last Time for All the Marbles

For the 18th and final time (for now, at least), Homestead-Miami Raceway will play host to Championship Weekend, a streak that goes all the way back to 2002. This will be Cup race number 20 at the circuit, and perhaps ominously for the four contenders, the driver with the best finish (6.6), the most top fives (10), the most top 10s (16) and most laps led (373) is none other than the closer himself, Harvick. Hamlin, however, has the most wins with two (2009 and 2013), a 10.6 average finish and is coming off a hugely morale-boosting victory at ISM Raceway. It’s fair to say he’ll be heading to Homestead feeling confident. But then again so will Truex, who won in 2017, finished runner up in 2018 and has eased his way nonchalantly through the playoffs with three wins in the nine races. Of the four drivers running for the title, Kyle Busch has easily the worst average finish (17.4), but he did finish second in 2017, pushing Truex all the way, not to mention his own title win in 2015.

This Sunday will mark the final full time Cup races of two garage veterans: Paul Menard and David Ragan. Menard will run the 471st race of a career that stretches back 16 years and a 29th-place finish at Watkins Glen International. All told, unless something unexpected happens on Sunday, Menard will finish with one solitary win (the 2011 Brickyard), two poles, 20 top fives and 69 top 10s, an average finish of 20.2 and just 342 laps led. Menard raced for some of the most famous names in NASCAR: DEI (Dale Earnhardt Inc.) (2004-2008), Yates Racing (2009), Richard Petty Motorsports (2010), Richard Childress Racing (2011-2017) and the Wood Brothers (2018-2019).

“The way I look at it there’s still 26 years before I can get my AARP card, so I’ll stay pretty busy doing things,” Menard said. “First and foremost, I need to be a good dad, good husband. Outside of that are a lot of opportunities. Obviously, we have a great company (Menards) up in Wisconsin that’s growing and vibrant.”

“I’ve prayed and heavily considered this decision, but for myself and my family, I believe this is the right thing to do,” Ragan said. “I am a husband and a father to two young girls first, and I am a driver second.”

While neither hit the heady heights they would have wanted in their Cup careers, both were solid professionals. I wish them the best in their respective retirements.

Here we are, then, just one race weekend and three races to go before we shut down the engines for what always seems like such a long off-season winter break, even if it isn’t actually that lengthy when all is said and done. Before we know it, we’ll be headed to the high banks of Daytona for Speedweeks. But for now, sit back and enjoy the last weekend of NASCAR racing in 2019. Here’s hoping it’s a good one.