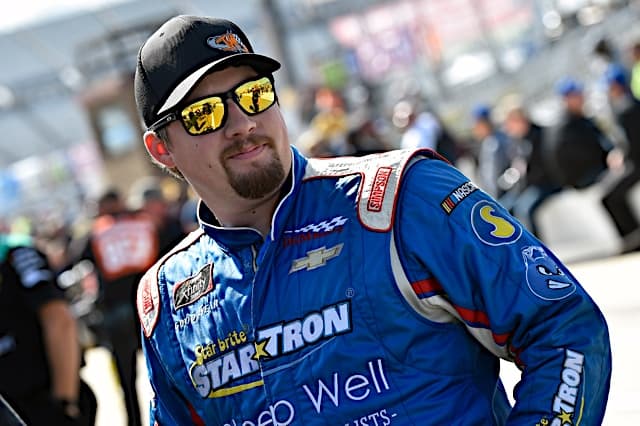 Josh Williams is the everyday man — someone who drives race cars for a living while working on them during the week.

In 2018, Williams ran the majority of the Xfinity Series schedule for DGM Racing, owned by Mario Gosselin. This season, he’s competed in 31 of 32 events, solely missing the spring race at Richmond Raceway due to being in a third car for DGM that had no owner’s points. When qualifying was rained out, he was one of two that missed the show.

Meanwhile, Williams sits 17th in the championship standings with seven top-15 finishes, including his first career top-10 result (eighth) at Talladega Superspeedway in late April. He has 10 additional top 20s.

Working on a limited budget, Williams has impressed a multitude of people in the NASCAR world. And though not knowing what 2020 holds yet, he’s going to continue make a living in the sport whether behind the wheel or not.

Recently, Williams sat down with Frontstretch.com to discuss his 2019 season, what it’s like working on a limited budget, throwing shade at Dale Earnhardt Jr. on Twitter and much more.

Dustin Albino, Frontstretch.com: How would you assess 2019 with DGM Racing?

Josh Williams: I feel like we’ve made big improvements from last year to this year. Better finishes, and I’m still learning a lot about the cars and different tracks that I haven’t been to before. All in all, I feel like we’ve had a pretty successful year.

We’ve overachieved at some levels, and I feel like we could have done better if things had worked out our way. All in all, we have nothing to hang our head about.

Albino: Where have you seen the biggest improvements from 2018?

Albino: Sitting 17th in points, is that about where you thought you would be this deep into the season?

Williams: Our ultimate goal was top 20 in owners points, for sure, and that’s where we’re sitting in owners points. We’re really focused on being better, and as long as we can put some good, solid finishes together and stay out of trouble and make sure we don’t have any mechanical issues that’s in our control, that’s where we should finish [currently 20th, 51 points ahead of the No. 0 car]. It’s all better than we expected and better than last year, so it’s been a good year.

Albino: What’s led to the increase in performance this season from DGM Racing?

Williams: Just trying different things with the cars themselves and getting them a little bit more up to speed on the latest and greatest little tricks of the trade. Even myself, I’m getting better and I can definitely be better.

We go back to these tracks again and I’m going to be faster. I’m going to be able to adapt to some of these places that I haven’t been to, or only been to one time. Everyone is putting in a lot of effort. Mario and everybody he has on his team — all two guys — keep giving everything they have.

Mario is a racer, he always wants to be better and have good finishes. He wants to build a program, and the results are showing that we’re getting better and better every week. We’re definitely not going to go backwards. We’re going to keep trying to progress and have nicer cars, better motors, more tires and things like that, and try to make the best of every situation.

Williams: Top 20 every week is where we want to be. I think anything above 20th is overachieving, for sure. Taking advantage of certain situations, whether it be pit strategy, people falling out of the race might fall into your hand and give you a better finish that day.

Some of our good finishes that we’ve had this year really haven’t been from a lot of fallouts, we’ve just had good race cars and a good strategy and were able to capitalize on other people’s mistakes and get good finishes.

Albino: Coming from running your own ARCA team, how much of a reality check was coming to the Xfinity Series and running in the 20s last year?

Williams: I think the biggest thing for me is comparing apples to apples. You take our family-funded team in the ARCA Series and run in the top five, win races and be in contention for the championship. Then you come over to the Xfinity Series with another family-owned team and you’re basically winning to your ability.

You’re still doing just as good, you just might not be in victory lane or you might not be contending for a championship. But with your caliber of cars, equipment, money, personnel and resources you’re winning.

To me, I think finishing 14th, 15th in DGM cars with the limited resources and the limited funding that we’ve had this year, that’s like winning races. I’m pretty happy about it and have really enjoyed the success that we’ve had.

Albino: Outside of more money, what do you feel like needs to be done in order to take the next step?

Williams: The biggest thing for us is to come up with some type of motor program. Very rarely, I think we’ve put one car or two cars on the pulldown [rig] this year. Mario doesn’t have a pulldown in his shop, so when we go on the track for practice that’s our pulldown. We always make the joke of, somebody calls Mario and they go, ‘Hey man, what load numbers are you going to pull down to,’ and he says, ‘Well, I’m going to get on the interstate and pull that thing all the way down to the racetrack.’

Personnel is big, and resources as well with a motor program. I think if we could get on something like an ECR deal, that’s really going to improve our finishes.

The big one that everyone talks about — even the big teams — is funding. If you have the funding all that other stuff falls into place and makes it a little bit easier. It’s a wide variety of things, so if you can get the whole package together, you’ll definitely have success.

Albino: When you’re limited to the equipment you’re running, how challenging is it to prove to people you belong?

Williams: It’s really tough because this is a business and this is what 90 percent of these teams do for a living. It’s tough to convince somebody, ‘Hey, I might have limited funds, but I’ll take care of your equipment, I won’t tear things up if it’s in my control. I’ll take care of it. I can bring you two guys and myself. I’ll work on the car, I’ll do what I can. I’ll get it through tech, I’ll do whatever you need to me to do.’

It’s a business and everybody is out here to keep their lights on and keep their families fed, and I’m doing the same. I’m doing this for a living so I’ve got to figure out how to make it work, whether I’m working on them or I’m behind the wheel.

Albino: What’s it like to have support from the likes of Mark Martin?

Williams: It’s pretty cool. I bought my first quarter midget from Mark Martin and raced against Matt [Martin’s son] a lot. Mark seen me at the racetrack working on my stuff, changing axles in bandoleros because I had to. Dad always told me if I couldn’t work on it, I couldn’t drive it.

Mark has watched me grow up in Florida and race against Matt in Quarter Midgets, Pro Trucks and things like that. It’s cool to have somebody like that — a Hall of Famer and somebody as good as he is to take notice of your ability.

I always talk crap to Dale ]Earnhardt] Jr. on Twitter of not knowing who I am, and he never writes me back.

Albino: Maybe he will one day.

Williams: One day he won’t have a choice.

Albino: How much discussion has there been about doing any Cup races?

Williams: We’ve talked to a few people about it. With the limited amount of sponsorship I have, you’ve got to convince that person that ‘Hey, I’m going to take care of your stuff and do the best job that I can for you.’

Getting a shot in motorsports is far and few between now. It’s very tough. You don’t see like what you used to back in the day, when, like, Shane Huffman said on Twitter that he never paid for a ride, somebody always hired him. Those days are slim. I think it’s possible, and I’m going to try to do it the hard way and make it all the way to the Cup level. It might not be a top-tier ride, but racing on Sundays is always good and that’s been my goal since I was about 12 or 13 years old.

Albino: How encouraging is it to see guys like Corey LaJoie, Alex Bowman, Ryan Preece not really come from a lot of money and end up in competitive Cup rides?

Williams: Definitely. For what Corey LaJoie does in that level of equipment, I think if you gave Corey a shot like Matt DiBenedetto has, I don’t see why you wouldn’t see the same results. I would almost tell you that most of the backmarker drivers are better than the guys that are running up front every week, but it just didn’t work out that way.

You might never get to see that person’s ability because this sport is so equipment based now, and it’s not like it used to be when you could drive the car a little harder than the next guy and be better than him. It’s cool to see guys like Corey have good runs and food finishes in that type of equipment. It just goes to show you that if you did put that guy in a really good car what could happen.

Williams: I’m not sure right now. This amazing sport and livelihood that I’ve decided to play in is one that’s very unpredictable. If I can’t come up with the sponsorship that somebody else can, I might not have that ride or a ride. We’re definitely working hard to make something happen. Regardless, you’ll see me at the track one way or another.

Albino: What’s it like to not know until that late in the offseason?

Williams: It’s stressful, for sure. This is what I do for a living, so this is how I make my truck payment, house payments and things like that. It’s stressful, but you’ve got to keep grinding and you’ve got to have backup plans. Backup plans are a must in this sport because you never know what’s going to happen or where you’re going to be next week.

Williams: Hopefully if things work out well, we’re putting some ARCA cars together for 2020 for Daytona. I’ve got a couple kids we’ve been talking to about racing for JW Motorsports in the ARCA combination series next year. That’s always an avenue that we can go down if we need to.