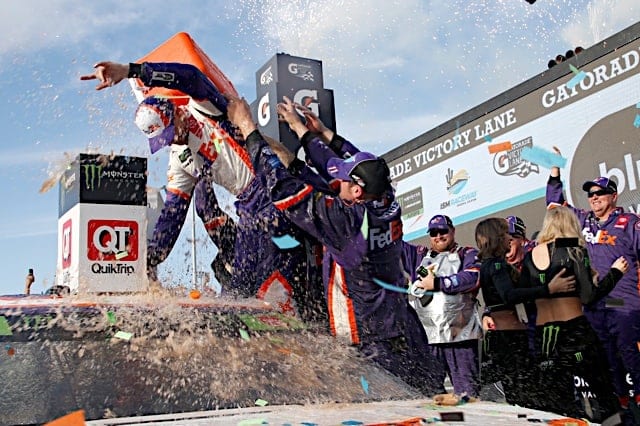 It was do-or-die for Denny Hamlin at ISM Raceway last Sunday (Nov. 10), but the 38-year-old survived to claim a coveted spot in the Championship 4. Nearly a decade after his promising 2010 championship run and subsequent postseason collapse, can Hamlin finally find the keys to the championship trophy? Can Martin Truex Jr claim his second championship in three years? Despite missing the Championship Four, can defending champion Joey Logano finish the season on a high note? After having monumental postseason collapses, can Chase Elliott and Erik Jones put their disappointments behind them in preparation for the 2020 season?

While all these questions are yet to be answered, our Frontstretch experts were challenged with picking their top 12 drivers currently in the Monster Energy NASCAR Cup Series.

The drivers are then given points based on their position, with first place getting 12 points, and each subsequent driver getting one fewer point until the 12th-place driver, who gets a single point. Points are then added together, and the rankings are subsequently produced.

Domination was the name of the game for Hamlin as he stormed around the one-mile asphalt ISM Raceway under the desert sun. While he definitely threw the hammer down on the competition, Hamlin will likely have to back it up with another stellar and mistake-free run at Homestead-Miami Speedway to claim a long-awaited championship.

Leader Denny Hamlin is currently running a pace that will somehow put even himself a lap down. #NASCAR

Is anyone getting any 2017 vibes? While the primary focus may be on Hamlin, Truex enters the championship round with seven wins, the most of any drivers this season. Judging by the history of the modern championship format, Truex will likely need to win at Homestead and make it eight victories, which ironically would be equivalent to his 2017 championship run.

Thank you to those who have served and to those who continue to fight for our freedom.#VeteransDay pic.twitter.com/FDZUk8Ljin

Despite “slumping” in the latter half of the season, the Candyman rounds out the Joe Gibbs Racing contingent in the Championship 4. While Busch pursues his second championship, JGR is on the hunt for its fifth MENCS ring. With a three-in-four shot of another championship crown, JGR’s odds are increasingly in its favor.

While it may be a tall task going up against three hungry JGR drivers, Harvick has already been beaten by a Gibbs driver once this week … that is … in a bet. While Kyle Busch may have beaten Harvick, along with his two teammates Truex and Hamlin, Happy is likely not phased. Time will tell how “The Closer” does this weekend.

You guys should follow along. @KyleBusch has left the van to jog. Of course there is a bet involved. https://t.co/xL9QHE9ika

Joey Logano has all four eyes on the prize. #NASCAR

Although Blaney may have come alive during the postseason, a lack of regular season playoff points may have been the culprit to his elimination. Despite being on the cusp of glory, Blaney can still hold his head high. With his best year statistically, the 25-year-old delivered another impressive run last weekend with a third-place finish. Although he may only have three MENCS wins to his name, should we be surprised if Blaney finds victory lane more often next season?

Chevrolet’s hopes for yet another NASCAR championship came to a screeching halt at ISM. Despite not transferring into the final round, Larson will likely finish as the top Chevrolet driver in points this season (unless the sky comes crashing down and William Byron wins Homestead and beats Larson by over thirty positions). With both Larson and teammate Kurt Busch returning, Chip Ganassi Racing may have to be reckoned with again next year.

Well we’ll give it another go next year. Proud of our team and the effort put in this season! Let’s go get a W in Miami next weekend.

Jones brought the green Interstate Batteries Toyota home in lucky position seven. While the number seven and the color green may be symbols of luck, Jones could have certainly used some luck in the Round of 16. Instead, Jones will have to sit back and watch his three teammates duel Harvick for the top step of NASCAR’s most important podium.

A good finish today our @interstatebatts @ToyotaRacing #Camry had good speed at the end. Great job @JoeGibbsRacing let’s get it in Homestead ? pic.twitter.com/uXaUfshbXl

On this week’s edition of Clint Bowyer’s social media chronicles: people inspired by Clint’s shopping lists, Anthony Sherman of the Kansas City Chiefs takes a business trip and the mayor hops in a racecar (and it’s not Jeff Burton).

Campers know how to have fun ⁦@ISMRaceway⁩ – there’s no better way to enjoy the Nascar experience. pic.twitter.com/IPywhraQBz

Keselowski may be limping into the season finale after a disappointing slump to end the season. Despite narrowly breaking the top 10 at ISM, Keselowski had to play second fiddle to teammates Blaney and Logano, who were still vying for the championship until elimination claimed them too. While another Team Penske championship will have to wait, can Keselowski clean up his recent struggles of late at Homestead?

The home of the free,
because of the brave. ??

You know Elliott’s Round of 8 was bad when his best finish during the three-race stretch was 32nd at Texas Motor Speedway. The following image says it all.

Unfortunately, Kurt Busch fell one spot short of 11th in the Power Rankings this weekend after finding great parody in the number 11. There’s always next week, Kurt.

Well, battled all weekend, could have raced for a better finish but speeding on pit road usually isn’t good. But, finishing 11th for 11-11 Veterans Day is my salute to you. If you see a military member, always say thank you. ?? pic.twitter.com/dkpo4yWysr