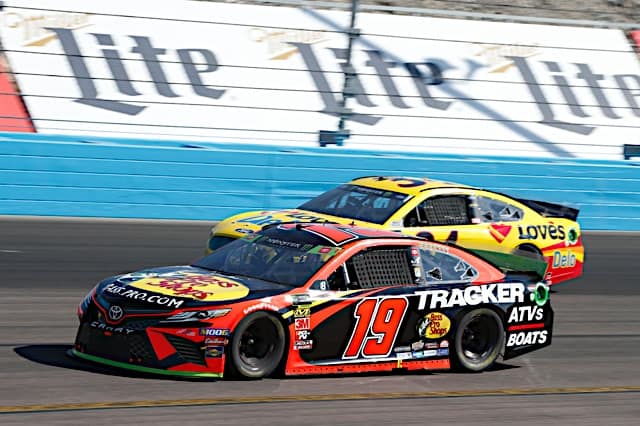 The Monster Energy NASCAR Cup Series has just one race left, not just this season, but also in its history under that name. But to get there, they first had to complete the Bluegreen Vacations 500 at ISM Raceway, which only was mildly interesting due to how enormous a lead eventual race winner Denny Hamlin had on his competitors for most of the event.

The race highlight was probably Hamlin’s slipping through lapped traffic on both sides of him early in the first stage. At one point only seven cars were on the lead lap, and both natural cautions seemed a little questionable, given how they came out right before the end of stages one and three.

Martin Truex Jr. could cruise around the past two weeks knowing that he was locked into the finale, but he notched a sixth-place finish on Sunday while pretty much coasting through the weekend. He’s racked up seven race wins, eight stage wins, 14 top fives and 23 top 10s in his first season officially at Joe Gibbs Racing.

While two of his three wins have come since the July Daytona race, Hendrick Motorsports’ Chase Elliott has had a rough second half of the season, recording six finishes in the 30s and eight outside the top 15. In the playoffs it’s been feast or famine, with a win and four top 10s alongside four finishes of 32nd or worse, including Sunday’s last-place 39th.

Kevin Harvick‘s gone from looking indomitable to merely very good at ISM Raceway, but the Stewart-Haas Racing driver still notched a fifth-place result, his 17th top five and 23rd top 10 at the track in 34 starts (he also has nine race wins and two poles).

In 2019, the No. 4 has four race wins, six stage wins, six poles, 14 top fives and 25 top 10s, with an average finish of 10.2. That consistency likely won’t be enough this weekend, but he could very well earn his second championship.

The good news for Richard Petty Motorsports’ Bubba Wallace is that he’s been less prone to crashing out of races in his sophomore year in the Cup Series. The bad news is that he’s been invisible on the track and consistently drawing attention off of it, most recently for admitting he purposely spun out last week (and getting dinged 50 points for it, about four races’ worth for his No. 43 team). On Sunday he was caught speeding and finished 25th, four laps down.

John Hunter Nemechek has finished 21st and 27th in his first two Cup starts, which admittedly isn’t amazing on paper, but he’s soundly beaten both his veteran teammates at Front Row Motorsports in both races, and he kept the No. 36 clean until the final caution with nine laps left.

In his rookie season in the Xfinity Series for GMS Racing this year, he’s recorded six top fives and 18 top 10s, including six of the past seven races. His Truck Series starts this year for his dad have been disasters out of his control, but he snagged a seventh at Martinsville.

Once upon a recent springtime, Hendrick’s Alex Bowman looked nearly untouchable. But in the second half of the season he’s recorded just five top 10s and six outside the top 20, including Sunday’s 21st. His average finish of 14.5 is decent, but not quite up to where HMS was probably thinking they would be this year.

The Miller Lite Christmas scheme is always a nice thing to see out racing, a reminder that the verrry loooongg NASCAR season is almost finished and it’s time to focus on being with family and friends, catching up on the recent big movies that have piled up, and following other sports like hockey, basketball and football.

So it’s obviously Brad Keselowski‘s Blue Deuce that wins this Paint Scheme of the Week Award, since it looked so cheerful and Christmasy. Also, while it likely was coincidence, about a quarter of the cars were dressed in either blue or green schemes in the Bluegreen Vacations 500, which is interesting.

The music played during the writing of this column this week was my Christmas Pandora station, a mix of country renditions, punk-rock instrumentals and traditional favorites.

Rick Ware Racing had a tie-dye scheme for their No. 53 this week, which is highly unusual for a race car but kind of works.

NASCAR does honoring the military pretty well, and this Veteran’s Day was no exception, with a Marine doing the National Anthem.

Satire is fun when it’s done right, as NASCARcasm proves week in and week out, even when there wasn’t that much happening.

That one uncle who still roughhouses with you like you’re still six years old when you’re actually in your late 30s.

It comes to this.

Prince Humperdinck’s four fastest ships will be sent out from the harbor … oh, wait, this isn’t The Princess Bride. But still, racing, like life, isn’t fair.

Anyway, the finale for all three national series will be run at Homestead-Miami Speedway this weekend, and we’ll have the newest crop of champions crowned with plenty of Frontstretch staffers onsite to cover everything.

The Gander Outdoors Truck Series’ Ford EcoBoost 200 will go green around 8 p.m. ET on Friday, Nov. 15, with TV coverage on Fox Sports 1. Though sentimental favorite Ross Chastain will prove his strongest competition, Brett Moffitt will defend his title as GMS Racing’s equipment is too much for the competition to keep up with.

In the Xfinity Series, the Ford EcoBoost 300 will go green around 3:30 p.m. ET on Saturday, Nov. 16, with TV coverage on NBC Sports Network. Christopher Bell doesn’t dominate the rest of the field, but he will claim the championship with the race win.

The Cup Series’ Ford EcoBoost 400 will go green around 3 p.m. ET on Sunday, Nov. 17, with TV coverage on NBC. I think Martin Truex Jr. will take the race win and his second title.

Speeding on pit road ! Heck bubba runs faster there than on the track. His motormouth still runs lickity split between races thought. Are you sure he was only four laps down !!!