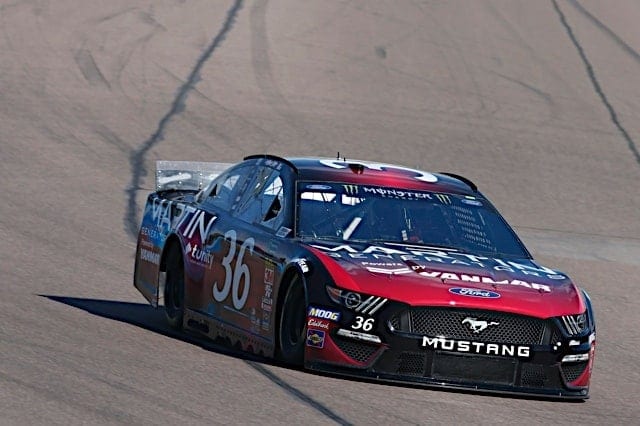 John Hunter Nemechek will complete his stint as the replacement driver of the No. 36 Front Row Motorsports Ford at Homestead-Miami Speedway. After his first two Monster Energy NASCAR Cup Series races, has he earned a Cup Series ride with the team? They have at least two open seats with Matt Tifft‘s departure and David Ragan‘s retirement. Also, no decision has been made yet on Michael McDowell. Adam Cheek refutes that notion and Mark Kristl argues Nemechek has earned the job in this week’s 2-Headed Monster.

No Nemechek in NASCAR Cup (Yet)

John Hunter Nemechek is a talented driver. He’s won in both of NASCAR’s lower series and did enough to earn a full-time ride with GMS Racing in 2019. He’s filled in for Matt Tifft in the Monster Energy NASCAR Cup Series each of the past two weeks, finishing 21st at Texas and 27th and ISM Raceway in Front Row Motorsports’ equipment and having solid overall runs in both races, though that second run was interrupted after he hit the wall late at Phoenix.

And yes, those are very good showings for the first top-tier races of his career in that equipment. Tifft was averaging a finish of 26th over the 32 races he ran this year, coming home in the top 25 in 15 of those events. Nemechek topped that average finish in his first race at Texas and would more than likely have had a similar effort in the desert – he was running 24th when he smacked the outside wall. Nothing less than a solid debut for JHN in his first two starts.

However, that doesn’t equate to readiness and immediately being deserving of a full-time Cup Series ride. Front Row Joe Nemechek’s son excelled in equipment others might struggle in, racking up six wins for NEMCO Motorsports in the NASCAR Gander Outdoors Truck Series and scoring one Xfinity Series triumph last fall at Kansas. He also scored a pole position start just a couple weeks after that victory, both achievements coming in Chip Ganassi Racing’s No. 42 car.

Then Nemechek was signed by GMS Racing to compete in the 2019 Xfinity Series full-time in the team’s No. 23. While he’s had a solid year – 18 top-10 finishes, six of those in the top five – he hasn’t been able to pull off a win, averaging a 12.7 finish as of this writing.

Granted, after drivers like Christopher Bell and Tyler Reddick depart the division on their way to the NASCAR Cup Series after the year is up, he’ll have slightly decreased competition for victories if he returns to NASCAR’s secondary division in 2020.

We’ve seen plenty of drivers get rushed to the upper levels too fast. Nemechek has talent – we have yet to see if he might stick with one particular lower series, as we’ve seen with drivers like Justin Allgaier, Matt Crafton or Johnny Sauter.

Every driver wants to advance as far as they can, and Nemechek is no different. He excelled in the trucks and earned himself starts in Xfinity, so he has the potential to move up.

Two starts aren’t enough to gauge how someone will do in NASCAR’s premier division.

Give him some more time. Don’t rush him. – Adam Cheek

In his first Cup Series race, he remarkably finished one lap down in 21st place. This race occurred at Texas Motor Speedway, which saw champions Jimmie Johnson and Brad Keselowski wreck out of the race. Nemechek was the recipient of the lucky dog on a lap 192 caution. He kept his No. 36 Ford clean and finished ahead of playoff drivers Denny Hamlin and Chase Elliott. Hamlin will compete for the Cup Series championship at Homestead-Miami Speedway. How would that look for Nemechek – beating the Cup Series champion in his debut?

At ISM Raceway, Nemechek smacked the wall bringing out the caution flag on lap 304, but he soldiered on. He finished 27th, one position lower than current Cup Series rookie Ryan Preece. In many ways, their careers mirror each other.

Both Preece and Nemechek won their first NASCAR Xfinity Series race driving in a part-time schedule. Both drivers have dealt with uncertainty in their careers. Preece banked on performing well in Joe Gibbs Racing Xfinity Series equipment and did so. Nemechek is driving for GMS Racing, which has been rumored to close its Xfinity Series program after this season.

Additionally, both drivers have been involved in controversy. Preece battled Elliott Sadler in the 2018 Xfinity Series finale. Sadler complained Preece raced him too hard in the final laps. Preece made a statement: he was ready for the next level. Nemechek is known for his hard contact and subsequent fight with Cole Custer on the final lap of a NASCAR Gander Outdoors Truck Series race at Canadian Tire Motorsport Park. Nemechek also made a statement: he would fight for every position and he was ready for the next level.

Preece has struggled at times in his Cup Series rookie season, but it is partially due to his lack of experience. He competed full-time in the Xfinity Series for only one season and has never raced in the Truck Series. Nemechek has competed full-time in both the Truck Series and Xfinity Series and won at both levels. He has a learning curve ahead of him, but he will be more prepared for his Cup Series rookie season than Preece was.

Nemechek has not been to victory lane this year but it is not entirely his fault. GMS Racing has only won once in the Xfinity Series, with Spencer Gallagher at Talladega Superspeedway. None of his replacement drivers, including Hall of Famer Bill Elliott and Cup Series star Chase Elliott, won driving the No. 23 Chevrolet. Nemechek has proven he can exceed his equipment, but one must wonder about the state of GMS Racing Xfinity Series program. If the team already determined it would shut down its Xfinity Series program, what kind of effort was put into improving it?

When Alex Bowman filled in for Dale Earnhardt Jr., he pleasantly surprised people and Hendrick Motorsports rewarded him with the No. 88 Chevrolet. Nemechek has exceeded expectations and Front Row Motorsports should reward him with a full-time Cup Series ride.

Only 22 years old, Nemechek can become a mainstay for Front Row Motorsports. They have found a talented driver; now they should build a team around him. Market his last name, give him a veteran crew chief, and retain David Ragan as a mentor.

Nemechek will make undoubtedly make mistakes. He would only be a rookie. One way for Front Row Motorsports to expedite his learning curve could be for them to have him compete in some Xfinity Series races. Get him experience at the tracks; practice makes perfect.

Racing on a budget family-owned NEMCO Motorsports, Nemechek won six Truck Series races. Front Row Motorsports secured sponsorship from Speedy Cash for him in the No. 36 Ford. With sufficient funding, Nemechek will become the best driver in the team’s history. – Mark Kristl

John Hunter certainly has run better in the other series than some full time Cup driver’s, in lesser equipment. Preece comes to mind, and for sure bubba didn’t earn his cup ride. I can see John Hunter running better than Corey and about right other cup driver’s. Give him a chance.

I have never really paid attention to watching this guy run much either. You are correct that Preece isn’t exactly lighting it up this year. With Wallace its hard to tell. Almirola’s performance improvement when leaving Petty shows how disfunctional that team has become. But I agree that he deserves a chance without undue scrutiny

His resume’ does not qualify him for the ride, BUT there are people that can identify talent at very young ages before they develop a resume’. But there are people that can spot talent. I’m not sure Bob Jenkins is one of them, but the easy answer is ‘no’. I think the real question is whether he’s the ‘best available’. If not him, then who? I’d have put Daniel Hemric in there first, for one.

i see JHN in cup one day. i don’t want him to be the next bowman. bowman did a decent job of filling in for jr when he was hurt but after he became full time in cup people started to question his ability.

i think another season in xfinity with christopher bell moving up, should help jhn. seat time is important so jhn running in trucks and xfinity series and fill in cup is all to his advantage.

have to see what happens next year when silly season starts for cup series.

He hasn’t done much in the Xfinity ride he has, but apparently it doesn’t matter.