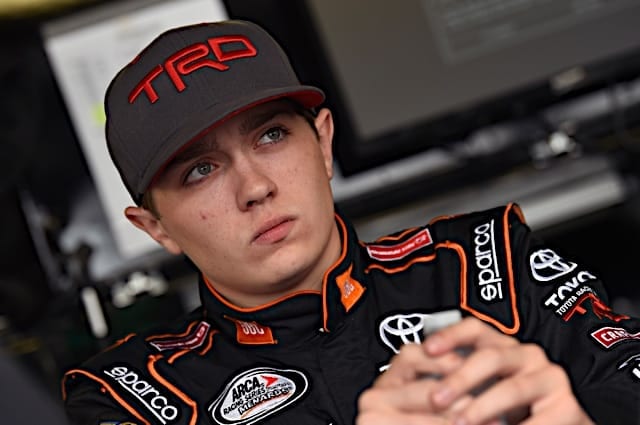 Kyle Busch Motorsports has tabbed a pair of teenagers for its NASCAR Gander Outdoors Truck Series lineup in 2020.

Both will compete for rookie of the year honors.

Eckes, the 2019 ARCA Menards Series champion, will pilot the No. 18 Toyota Tundra and will carry full-season sponsorship from Safelite Auto Glass.

“Christian has won races and a championship in the ARCA Series, and we feel like he’s capable of doing the same driving for us full-time in the Truck Series next year,” owner Kyle Busch said in a team statement. “He’s shown speed while running a part-time schedule for us the past couple of seasons — he’s won poles, led laps and been in a position to win a few races. We feel like it’s just a matter of time before he puts everything together and starts winning at this level.”

“Returning to KBM to compete full-time for a NASCAR Gander Outdoors Truck Series championship with the support of Safelite AutoGlass and Toyota is an opportunity that I’ve worked my whole life for and I’m ready to take advantage of it,” Eckes said. “Being around the Truck Series the last few seasons, I’ve been able to see firsthand how much effort Safelite puts into their racing program, and I’m excited to represent them not only on the track, but in the communities that we race in.”

Lessard, who cut his teeth on several Canadian late-model circuits, will wheel the No. 4 Toyota.

“Raphael has continued to prove himself as an outstanding race car driver,” Jack Irving, senior manager and commercial director for Toyota Racing Development, said. “He has shown poise behind the wheel and has achieved solid results in the opportunities he’s been presented with thus far. We look forward to watching him grow and achieve even more with this full-time opportunity in 2020 behind the wheel of a Kyle Busch Motorsports Tundra.”

Like Eckes, Lessard has limited NGOTS experience. This season, Lessard made his Truck debut at Martinsville Speedway in March, where he finished 14th for KBM. Since then, Lessard has made four additional starts, splitting time between KBM and DGR-Crosley. The Canadian earned a best finish of ninth at Iowa Speedway while driving for DGR-Crosley.

“I’ve been working really hard the last few years to put myself in position to drive full-time for Kyle Busch Motorsports in the NASCAR Gander Outdoors Truck Series — so this opportunity is a dream come true,” Lessard said. “I can’t thank Kyle and everyone at KBM, Toyota and TRD enough for having the confidence to put me in their truck, and it wouldn’t be possible without the support of my parents and everyone that has invested in getting me to this point.”

Crew chief details were not disclosed in the Nov. 14 announcement.

The announcement confirms the departure of Todd Gilliland from the team at the end of the 2019 season. Harrison Burton, the team’s other full-time driver in 2019, had already been announced as departing to Joe Gibbs Racing in the Xfinity Series next year.

KBM has not yet confirmed its lineup for its No. 51 for 2020, though it’s assumed team owner Busch will compete in that truck for his allotted races.