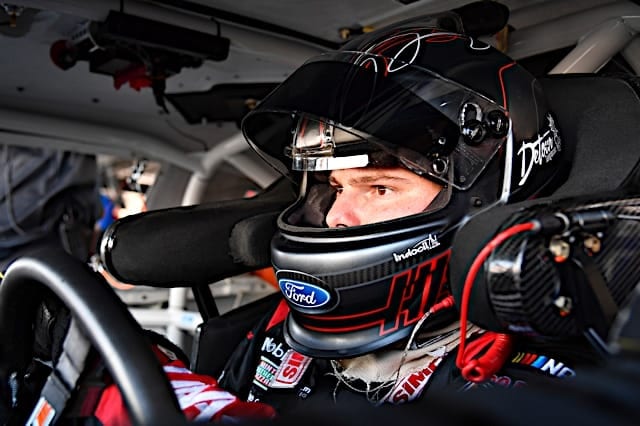 For Stewart-Haas Racing’s Cole Custer, Championship 4 Media Day on Thursday (Nov. 14) didn’t exactly come at the best time.  A couple of hours before the media availability began, Motorsport.com’s Jim Utter reported that Custer would be moving up to Cup in Stewart-Haas Racing’s No. 41 in place of Daniel Suarez.

As could be expected, the line of questioning started off from there.  Custer didn’t really know how to feel.

“Right now, I’m just trying to focus on the championship,” Custer stated.  “I’ve really tried to kind of stay out of it, I mean, honestly, this is a really big weekend for us, I mean to win a championship in the Xfinity Series, so if we can do that that’s probably my focus this next week.”

It’s quite taxing for Custer to get blindsided by such news right before one of the most important race weekend of his career starts.  Luckily, Custer is no slouch at Homestead.

Custer dominated the Ford EcoBoost 400 in 2017, leading 182 of the 200 en route to one of the most dominant victories in years.  Custer, who was not in the Championship 4 that year, won by 15.405 seconds over Sam Hornish Jr.  Last year, Custer led 95 laps from the pole, but had to settle for second behind Tyler Reddick.

Entering Homestead, Custer has had his best year in NASCAR.  He’s won seven times this season, three of those coming on intermediate tracks.  Three of the wins have come on tracks with old pavement that results in high tire wear (Fontana, Chicagoland and Darlington).

All that makes Custer a very good pick for this weekend.  That said, he’s not willing to call himself a favorite.

“We’ve been really good on mile‑and‑a‑halfs, especially low‑grip racetracks, so I think we should be good,” Custer stated. “At the same time, all four of us are going to have fast cars, so it’s who can put the best race together and it all comes down to that last run like we saw last year.  So, I think whoever puts the best race together overall is going to win it.”

He’s also got a couple of good allies in his corner in Kevin Harvick and Chase Briscoe.  In Harvick’s case, he drove part-time in the No. 98 last year and has been watching Custer quite a bit.

“When I first started in the Xfinity Series, I used to talk with [Harvick] every single weekend,” Custer said.  “So he’s always been a huge help and I think he’s definitely a big reason of where I am today.  So it’s just a matter of ‑‑ there’s always things you can get better, so the more that you can ask questions and stuff like that, it’s always going to help you.”

Last year, Briscoe shared the No. 98 with Harvick.  This season, he’s been Custer’s full-time teammate, not just in the Xfinity Series, but also in spot starts for Multimatic Motorsports in IMSA Michelin Pilot Challenge.  Custer likes the ability to bounce thoughts off of him.

“I think it’s good always to have kind of a different thing to kind of bounce off of, different notes and different driving styles and stuff like that,” Custer said.  “There’s just more stuff going on.  [The No. 98 team] have definitely hit their stride halfway through the year and I think they have been running really good, so I think it’s all been a good thing for sure.”

If Saturday afternoon ends up being the last hurrah as a full-time driver in the Xfinity Series, then he will be leaving after an excellent year, regardless of what happens.  If he can pick up the championship as well, it will be all the better.