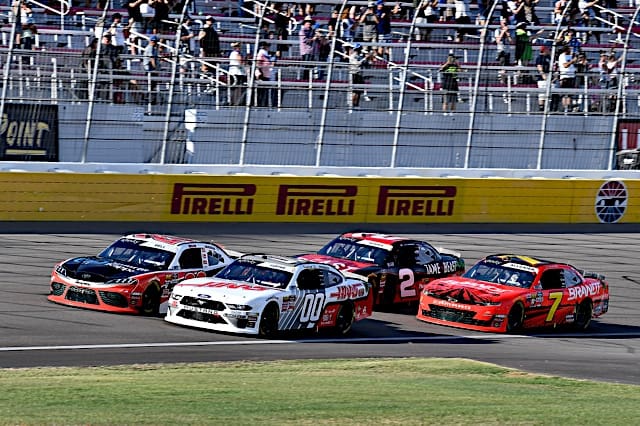 Another nine months of NASCAR racing has come and gone, and it’s time to crown a champion in South Beach. This year’s Xfinity Series Championship 4 lineup is stout.

The majority of the 2019 season has belonged to three drivers: Christopher Bell, Cole Custer and Tyler Reddick, combining to win 20 of the 32 races this season. But throw in a crafty veteran, Justin Allgaier, and this is the best Homestead lineup in the four years of having a “game seven moment.”

Throw out the stats from the previous 32 races, because odds are, these four drivers are going to run toward the front, if not one through four, a la the Monster Energy Cup Series championship race last season. Over the past two seasons, these four drivers have been the best Xfinity regulars. Period. End of story. In fact, three of them will return to the Championship 4 for the second straight year, while the other has been there twice before.

Ultimately, it comes to one race and 300 miles. So who’s going to win it? Let’s break down each driver’s chance.

For the better part of the past two Xfinity seasons, Bell has been labeled as the posterboy of the Xfinity Series. Hell, he should be. He’s won 15 of the past 58 races, dating back to the spring Richmond race in 2018. That’s Kyle Busch status, y’all.

Bell competes for Joe Gibbs Racing, which has been the staple of the series for the past 15 years. But the Oklahoma native hasn’t always run particularly well at Homestead, specifically in Xfinity.

In two starts at Homestead, Bell has an average finish of 23.5, posting a best finish of 11th last season while battling for the championship. And though he entered that race with the most wins in the series, the No. 20 team was off throughout the race and had a loose wheel late.

Throughout his brief NASCAR career, Bell hasn’t been known to run the wall, which is something drivers must do at Homestead. After the race last season, that was one of the areas Bell believed the No. 20 team struggled with most, causing him to finish last of the four championship contenders.

Will 2019 be the same song, different verse for Bell? He’s more mature than he was one year ago and nothing seems to phase the soon-to-be Cup driver (moving full-time to Leavine Family Racing in 2020). Another year of experience, along with veteran crew chief Jason Ratcliff atop the pit box should bode well for the driver. So for the second consecutive year, he’s probably the favorite.

Flashback two years ago to Homestead. Custer dominated at Homestead, leading 182 of 200 laps, cruising to his first career Xfinity victory. Since then, the No. 00 team hasn’t stopped.

This season, Custer has been an animal, specifically at worn-out, high-banked racetracks that suit similar to Homestead. Fontana? Check. Chicago? Winner. Darlington? Bullseye. Throw the first Richmond race of the year in there, and Custer has been dominant at tracks that are harsh on tires.

Now let’s think back to last year’s Homestead race, this time Custer among the challengers for the championship. The first half of the race belonged to the No. 00 car, sweeping the first two stages and leading 95 laps from the pole. Add up the totals from the two races he’s competed at the track in Stewart-Haas Racing equipment, Custer’s led over 69% of the laps (277 of 400). Nice.

If it wasn’t for a pit call to keep the No. 00 out on old tires by Custer’s former crew chief, Jeff Meendering (now leads Brandon Jones‘ team), it could be the California native that’s aiming to win back-to-back championships.

Instead, Custer is looking at his first, and truthfully, I believe he’s the favorite. His stats at Homestead don’t lie, nor do the numbers he’s put up this year on worn out track surfaces.

Reddick is looking to do something no other driver in series history has ever done: win consecutive championships with two different organizations.

Remember when Reddick drove for JR Motorsports? People seem to forget it, but the 2018 Xfinity title was won by Reddick in the No. 9 ride. Hell, NASCAR officials even overlooked him in promoting the series prior to the 2019 season kicking off at Daytona, excluding him from commercials on television.

But Reddick came out with a vengeance this season, winning his first race of the season at Talladega Superspeedway. Since then, he’s won four additional races at a variety of different tracks.

Sure, the No. 2 team might not have the sheer speed that Bell or Custer have, but if one thing is certain, Reddick is going balls to the wall every lap. In 32 races this season, Reddick has 23 top-five finishes, which is more than three times the amount he had in his championship-winning season (seven).

Last season, Reddick rose to the occasion at Homestead, entering the race as a big underdog. He notorious for running the Kyle Larson line around the top, so if the No. 2 car can get that rolling on Saturday, look out.

Allgaier enters Homestead with a ton of momentum, winning the series’ last race at ISM Raceway, catapulting him into championship contention. After all, it was his first win of 2019.

But Phoenix is one of Allgaier’s best tracks on the circuit. Homestead, on the other hand, is not. Though he has more starts at the track (nine) than his three championship foes combined (seven), the Illinois native has just two top-10 finishes at the venue, placing a personal-best in 2016 of sixth.

Allgaier’s familiar with the championship format. He was a part of the Championship 4 in both 2016 and 2017, finishing third both seasons. However, this year is different, because the No. 7 team has had little-to-no luck, though entering the race with a career-long 16 consecutive top-10 finishes. It’s a total 180-degree turn from 2018, when Allgaier was dominant in the regular season – winning a career-high five races – though failing to execute in the playoffs, missing out on Homestead.

Compared to Bell, Custer and Reddick, Allgaier is a big underdog. However, his experience could play dividends and hand JR Motorsports its third consecutive championship.