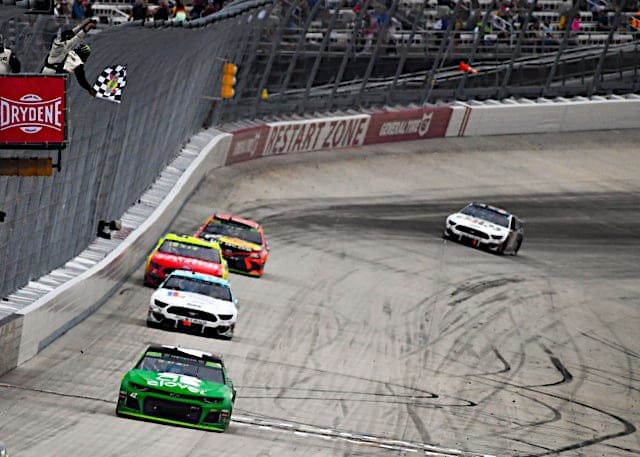 The discussion at the beginning of the 2019 Monster Energy NASCAR Cup Series season was the package. After short tracks and road courses, it was apparent that a change was needed.

After last weekend at ISM Raceway, it isn’t just needed — it is necessary.

With that said, this column is not about the package. It is about the system, the environment and, ultimately, what the loyal fans of this sport deserve.

Next season the final race of the year is going to move to Phoenix. The track as produced some great races in the past, but last weekend was not one of them. If we have to stomach this winner-take-all system, we at least have to be given a good race.

The current package on short tracks and road courses included an enormous spoiler. The purpose of that spoiler is to allow cars to draft up to the car in front of them and, theoretically, make a slingshot pass. While that hasn’t happened anywhere, it has never happened on a short track. Due to that fact, there has been a handful of on-track passes for the lead on short tracks and ZERO on-track passes for the lead on road courses this year.

While it is obvious something has to be done, it really would put the race teams in a bind if NASCAR actually did try to do something next year, because in 2021, we have a brand new racecar coming. The teams are putting a lot of R&D into the roll-out of that car, so they really shouldn’t be taxed with coming up with figuring out a new package that is going to be run for 10 or 12 races in 2020 and then scrapped. Unfortunately, if they don’t do something, the championship race is going to be a steaming pile of dog feces.

Thankfully, at Homestead-Miami Speedway on Thursday, Steve O’Donnell, NASCAR’s executive vp and chief racing development officer, addressed the assembled media and said they are looking at options for short tracks and road courses next year.

Will whatever they decide be enough? Probably not. But at least they recognize there is a need.

In reality they need to chop 7 inches off of the spoiler and leave just enough to keep the cars from spinning out. Barring that adjustment, there are only a couple of things they can do.

First off, and this is a horse that is so dead it is almost decomposed, they can change the tires. Race tires should not be rocket science. It should be up to the drivers and teams to make their tires last. If they don’t last, it isn’t on the manufacturer, it is on the teams. Unfortunately, unless NASCAR gets out in front of it and pushes the PR that it instructed the tire manufacturer to make tires that will wear out and possibly fail if pushed too hard, they will never make tires that will do that.

Sadly, the sport today has become dependent on the tires lasting for more than a full fuel run when the drivers are going as hard as they can. It needs to be more like the tires will last a full fuel run if a driver goes 85% for the fuel run. If they go 100%, they’ll need to pit before they are low on gas. If they go 50%, they can squeeze two fuel runs out of them. Put the racing in the drivers hands and stop relying on Flintstone Era-hard tires.

The other thing they could do at the short tracks is take the tapered spacer off of the cars and let the teams make as much horsepower as they can possibly generate. That will allow some differentiation from the teams that can spend the big bucks on horsepower and the ones who can’t. It would also give the drivers the ability to push it deeper into the turns and then have to brake harder. It isn’t an ideal situation, but when the alternative is the heinous display of follow-the-leader we had at ISM, the latter is a welcome change.

One final note about options for the race: PJI/sticky stuff/traction compound/carcinogen product is a crutch for crappy tires and should not be an answer for the problem. If the tires work the way they should on tracks that have even a small amount of age on them, there is no need for traction enhancement on the racetrack. We continue to see tracks try to entice people to race where they don’t. That will truly only be changed when tires give out and the drivers are forced to seek out the lines that work best for them, not where adhesive has been applied.

The current point system is manufactured to try and create game seven moments every race season. For the last few years the finales at Homestead have been captivating. Next year we go to ISM. Whatever drove that decision doesn’t matter, the fact is it has been made; the championship will be decided there, and it is up to NASCAR to try to give the teams a competitive playing field where the four drivers contending for the title have the opportunity, assuming they have the best car, to drive to the front of the field and win the race.

If the package they are racing is incapable of providing that ability to the drivers, the title will be a travesty of epic proportions. In a time where the sport seems to be rebounding from the bottom, there is no reason to shoot itself in the foot with a horrible title race.

I’ve been wishing for softer tires the entire decade. Fuel should not always be the determining factor of when a car needs to pit. Softer tires also create movement (passes) within the field as tires wear during a run. And maybe, just maybe, tires that wear might actually allow drivers to overcome the aero issues that make passing for the lead almost impossible.

The clowns in charge in Daytona have negated that already with the late event cautions. It’s not long enough to wear the tires. And Baby Busch on used tires would still beat four new ones.

Just think If Brian was in charge of the NFL there would be 32 teams on the field for the Stupor Bowl.

Great article. I couldn’t have said it better. Nascar has become IROC. IROC was fun because I brought together a lot of different drivers to race against each other. But it’s not what Nascar should be. Yes, I’m old school but that’s what made Nascar great. Has anyone noticed that when they started turning to IROC is when attendance and TV rating tanked? And one other thing. For all the years I’ve watched Nascar it was the biggest NO NO for teams to mess with their tires. But now Nascar puts that crap on the track to make the tire stick. That’s totally wrong.