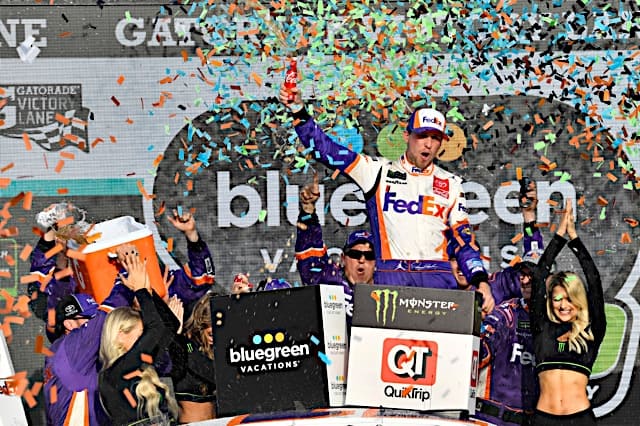 A week ago, Denny Hamlin was getting peppered with questions about the impending weekend that was: essentially a win-or-go-home race, with a Championship 4 berth on the line, in his best career season to date, driving for an organization that has clearly been the class of the Monster Energy NASCAR Cup Series, one week removed from a self-inflicted mistake at Texas Motor Speedway putting his team in this position.

He was at peace with whatever happened.

“No matter what, I will not consider this year any sort of a failure,” he said then. “It’s been a really good year, and I’m just not going to let the outcome of this weekend, or last weekend, decide whether it’s a good season or not. I think you have to adjust that.”

When asked if he was OK with being this generation’s Mark Martin, widely regarded as the best driver to never win a Cup championship, Hamlin didn’t stutter.

“I think Mark Martin said it best: ‘You can still be respected and still have a really and successful career without winning a championship,’” he said. “I read that he thinks about now that he’s 60 years old, he looks back and thinks, will a championship make any difference in my life right now? He says, ‘No, it wouldn’t.’ I’m at that point. I don’t feel like I have anything to prove. I know what I’m capable of, I think my competitors know what I’m capable of.”

He showed it on Sunday, dominating the Bluegreen Vacations 500 at ISM Raceway, punching his ticket to the Championship 4.

“Where do you wanna go win next?” was uttered over his radio, as Hamlin has after a handful of his wins this season, showing the confidence that exudes out of the Chesterfield, Va., native in his 15th Cup  season.

A far cry from nine years ago at the same venue, where things began to fall apart for Hamlin.

But he answered every and all questions about that November day in 2010 with honesty, candor and thoughtfulness. Because that was a different version of Hamlin than the one we’re seeing now.

“I think over the years, we’re almost 10 years later, I’m just more content with what I’ve accomplished in the series,” he said. “I don’t need validation of a championship. I think that the outside world feels like I need that to validate my status, whatever it is. But doesn’t change who I am.  Doesn’t change how I treat people.  If I don’t win this year, I’m going to work just as hard for 2020.”

Hamlin learned from his 2010 mistakes not only on track, but off it too. He’s widely considered one of the flashy drivers, never afraid to flaunt his wealth — like the Daytona 500 car in his living room, or the basketball court in his basement, or his extensive collection of Jordans, you get the point.

Simply put, he has swag. Not every driver — heck, maybe no other driver in the garage can say that. Nor do they want to, I reckon. He bottled everything up a decade ago, not hanging out with anyone during the championship weekend.

He didn’t reply to calls or texts, he didn’t go out like he usually did. He locked himself in his hotel room at 8 p.m. and tried to get a good night’s sleep before what was then the biggest race of his life.

“Really just overthought it. I mean, I’m not going to overthink it this time. I’m just going to do my thing and have fun and enjoy the moment.”

The wording “goal accomplished,” may have angered crew chief Chris Gabehart, as did his words on Friday. NBC Sports’ Marty Snider revealed during the broadcast that Gabehart texted Hamlin upon hearing his honest thoughts on not winning the title and essentially told Hamlin to zip it.

“He’s like ‑‑ I don’t remember exactly, but a lot of it is just like, well, expect more from yourself,” Hamlin said. “Something of that nature. He’s always there to just check up on me to make sure and see where my head is at to make sure that I’m still as motivated as ever to go out there and capture the big prize.”

Hamlin said the two don’t really have a relationship off the track, but that doesn’t need to change given their results this season, their first time paired together at the Cup level. Six wins, including the Daytona 500, coming off a winless season in which some people were questioning his job security speaks for itself.

And so does Hamlin’s demeanor. I wish everybody could have been in the post-race press conference once things began to die down in the desert. It had a different feel to me. Hamlin was so (pardon my Millennial word here) chill, so calm after what was arguably the biggest clutch performance of his career, with everything in front of him and the chance to define his own career. And it all stems from the way he is.

Hamlin stayed up until 1 a.m. the night before, playing tennis at a mansion he and a group of friends rented for the weekend.

Jokes aside, he’s got his priorities in order.

“I can tell you, being around those guys, my group of friends, it takes stress off of me,” he said. “I don’t think about racing nearly as much as I would if I was more isolated.”

Isolation led him astray in 2010. Nine years later, he’s found what he needs.

Just picture it: Hamlin walks into the media center for his championship press conference. As it goes on, the day that was wanes into the wee hours in the morning. The clock strikes midnight on November 18.

Hamlin celebrates his birthday with a championship trophy by his side, career etched in the NASCAR history books.

How could you not be at peace with that?

I don’t know why they are bothering to run the race. everyone has decided that it’s Dennys’ ‘turn’ to finally win a title.