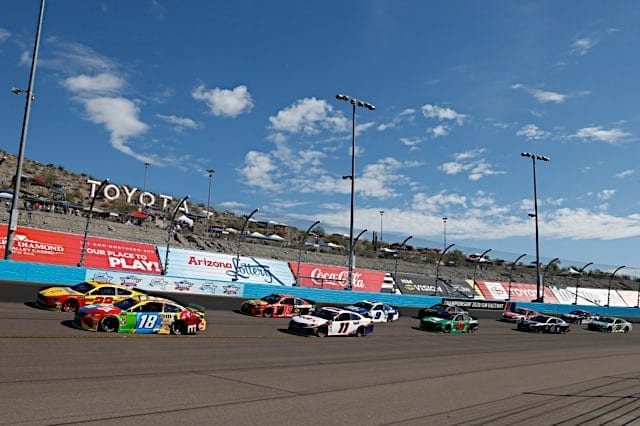 In this week’s edition of the Frontstretch Podcast, Dustin Albino and Mike Neff discuss a lackluster race weekend at ISM Raceway that saw Denny Hamlin, Justin Allgaier and Stewart Friesen win their way to Homestead in the top three series.

Hamlin had to hold off a handful of playoff drivers with a late-race restart in Phoenix, en route to advancing to Homestead. But what happened to Joey Logano after dominating the middle part of the race?

Allgaier capitalized late in the Xfinity Series race, winning his first race of 2019. Friesen picked up his first asphalt win in NASCAR.

The duo discuss Bubba Wallace getting fined $50,000 and penalized 50 points for admitting to intentionally spinning last week at Texas. Is that a fair penalty?

Finally, the duo give their championship predictions. Will Martin Truex Jr., Kyle Busch or Kevin Harvick win their second title, or is Hamlin destined for his first?

In the Xfinity Series, Allgaier is looking to upset the “Big Three,” while Christopher Bell and Cole Custer are both looking for their first series title. Tyler Reddick is hoping to become the first driver in series history to win consecutive championships for different organizations.

What about Trucks? Matt Crafton and Brett Moffitt are looking for another time on top, while Ross Chastain is hoping to end his dream season basking in the glory. Friesen is looking to do the dirt racing community proud, winning a national touring title.