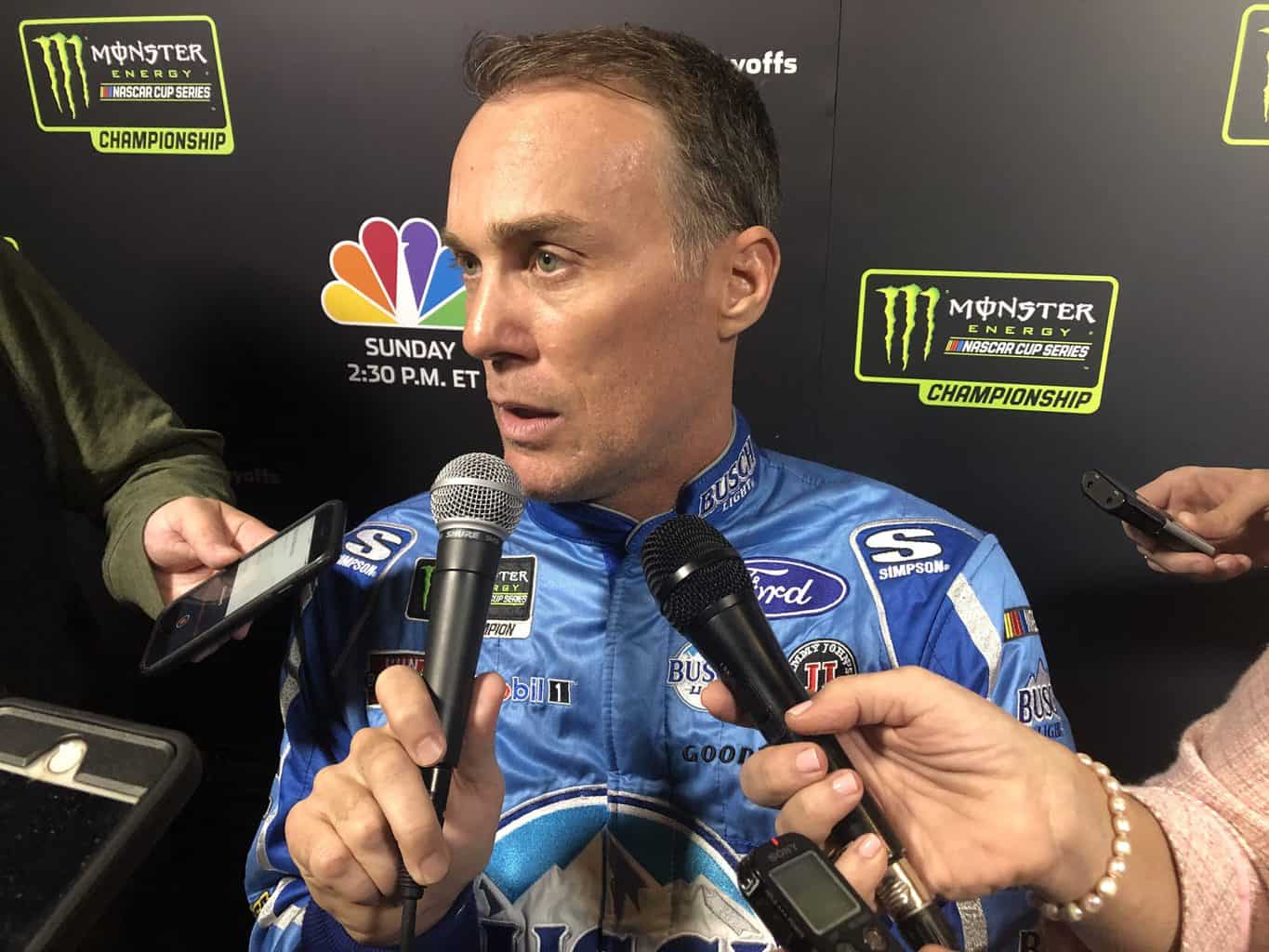 Last year, Joey Logano dubbed the Championship 4 “The Big Three and me.”

This year, it’s pretty much “The JGR Three and Kevin Harvick.”

But the 2014 Cup Series champion isn’t approaching Ford Championship Weekend that way. Frankly, he doesn’t really know what to expect from the season finale at Homestead-Miami Speedway due to increased variables, including the new rules package and less tire falloff, among others.

“It’s a little bit of a guess, just because we know Homestead is so much different than the tracks we already go to,” Harvick said. “Our guys have done a great job in preparation regardless of how it goes. Having scenarios, situations, adjustability, all those types of things prepared for the weekend as to what happens after you unload after the first practice and see where the racetrack is with your car.”

For some, seeing Harvick make it this far was a bit of a surprise considering where they started the year. Top-10 finishes in six of the first seven races (including a crash in the Daytona 500) wasn’t a bad start by any means. But for Harvick’s and Stewart-Haas Racing’s standards, they had much more work to do.

“It’s been a great second half of the year,” he said. “Our team has really proven to not only everybody else, but ourselves how good we are as a group and how much we’ve had to work this year to get to where we are. It’s been very rewarding to sit here and be able to look at each other and have celebrated in Victory Lane and have the chance to race for a championship. I’m really proud of the team and I know they’re obviously excited everything ended the way that it is currently.”

The results didn’t come without hardships and self-introspection. Along with crew chief Rodney Childers, there were many conversations about what needed to be done to turn the ship around.

“Oh, yeah, a lot of doubts,” he admitted. “I think as we started the season the results weren’t bad, we had mediocre results, I think for what we expect as the No. 4 team […] I would be lying to you if I told you it wasn’t taxing on everybody in order, in the amount of work that has been put in to get to this point.”

This marks Harvick’s fifth Championship 4 appearance in the six years of the format, tied for the most since the new postseason setup was introduced in 2014. Still, the difficulty of moving through the 10-race postseason isn’t lost on Harvick.

Harvick detailed instances that can’t happen if you want to have a chance to win a title. Getting loose and backing it into the wall, running through a pit box, having a mechanical problem, getting caught up in somebody else’s mess – the list goes on.

But experience means those mistakes should be minimized on the No. 4 team this weekend. It should be no coincidence that three of the Championship 4 were here last year and the other one (Denny Hamlin) has been here before too, albeit in 2014.

As they say, the cream always rises to the top.

“Our teams are experienced and have navigated those things year after year,” Harvick said. “You see the best crew chiefs, the best organizations, the best drivers and they consistently stick out.”

Denny Hamlin, who won at ISM Raceway last weekend to clinch his spot in the Championship 4, mentioned that even if he didn’t leave Miami with a championship, the season would still be considered a success.

Harvick agreed with Hamlin’s assessment, but made sure to set the record straight.

“For me you definitely race all year to get here, I would agree with him,” he said. “And for me it’s really about being competitive every week. This is the icing on the cake because I couldn’t do this if we were struggling on a week‑to‑week basis of trying to finish 10th. It’s just, it’s too much work and too hard to do and I don’t think that our guys on the team would ever be satisfied with that or within our organization as well.”

Experience only goes so far for Harvick and company in this particular circumstance. He does have the best average finish at Homestead-Miami Speedway among his Championship 4 counterparts. But the SHR veteran pointed to different cars, engines and tires as to how the playing field has been evened to a certain extent.

“You have to lean on past experience of things, trends that have been there for our team and things we’ve done at this particular racetrack,” he said. “It’s definitely a racetrack where experience pays off.”

As for whether or not being the only SHR Ford in the Championship 4, compared to three Joe Gibbs Racing Toyotas, is an advantage for Harvick, he said to check back on Sunday night.

But he did reveal the mindset inside the organization, a philosophy which has remained constant for the past few weeks now.

“How do we get SHR another title? All four teams have bought into that and want to do the exact same thing because of the fact that it’s good for SHR,” he said. “Our guys have worked their butts off on all the cars over the last four weeks, trying to do everything they can to learn about the cars. It’s still a little bit of a guess of where we are. It’s a bit of a science of where you think things are going to be. But it’s been nice to not deal with any politics internally. It’s ‘What do you need, let’s do it!’ There’s nothing to navigate for us.”

The only current Cup driver with multiple titles is not championship eligible this weekend. It’s unlikely that any driver in the modern era will reach Jimmie Johnson‘s record of seven trophies, but Harvick said a second title, which would put him in a different category, would indeed change his legacy.

“Championships are what we race for,” he said. “The more you win, the more it solidifies what you do on a week-to-week basis. They’re hard to win, it’s hard to get here. This’ll be the fifth time here and we’ve only won once. It’s definitely something we’d love to do again.”