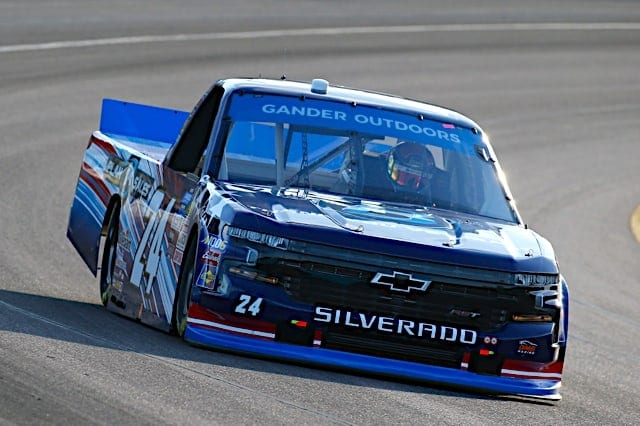 However, that does not mean the championship winner will have to win the 2019 Ford EcoBoost 200. In fact, since Homestead-Miami Speedway hosted the season finale beginning in 2002, only once has the race winner also won the championship.

He is not doomed though. It has been a career-best year for him. Chastain has transformed Niece Motorsports into contenders. Chastain has three wins this season, second-most among the Championship 4 drivers.

Chastain and Niece Motorsports have not shied away from challenges this year. After having a win at Iowa Speedway negated due to failing post-race inspection, they fought back and won the next race at World Wide Technology Raceway at Gateway. Chastain is ready to deliver Niece Motorsports its first championship before heading off to the NASCAR Xfinity Series with Kaulig Racing.

Matt Crafton is a two-time Truck Series champion, but he enters Homestead-Miami Speedway as the only Championship 4 driver without a victory this season. Fortunately, he has been successful at the track including a win in 2015.

Among the four drivers, Crafton has led the most laps at the track, has five straight finishes there in the top 10 and will have the full support of ThorSport Racing. His three teammates have combined to lead 142 laps at Homestead-Miami Speedway, so Crafton and crew chief Carl Joiner Jr. have an extensive database of information to utilize for the race.

However, Crafton has not been as good as his fellow playoff competitors. He is the only one to lead less than 100 laps this season, is tied for fewest stage wins and has the fewest top fives. None of those numbers suggest he will win the 2019 championship.

Here is the catch though. Entering the playoffs, there were plenty of doubters, myself included, who did not think Crafton would advance this far. The 43-year-old veteran has done exactly what he needed to do to make it to the Championship 4 with only one DNF in the playoffs. Can he conclude this surprise run with the championship?

After coming oh-so-close to winning many races, Stewart Friesen broke through this year, winning the Eldora Dirt Derby. He then advanced to the Championship 4 with his win at ISM Raceway. He enters Homestead-Miami Speedway with arguably the most momentum. Over his last 10 races, he only has two finishes outside of the top 10.

Friesen is tied for the most top-five finishes this season. His qualifying effort is usually indicative of his finishing position. His average starting position is 8.7 and his average finishing position is 8.4. If Halmar Friesen Racing can give him a fast No. 52 Chevrolet, Friesen could race upfront for much of the race. While the championship is not decided until the final lap, Friesen certainly would rather be ahead of his fellow playoff drivers than chasing them.

Brett Moffitt is the defending race winner and champion. He led 59 of the 134 laps in last year’s race. Now he drives for GMS Racing, the 2016 championship-winning organization. Another statistic which favors Moffitt: in two Monster Energy NASCAR Cup Series races at Homestead-Miami Speedway, he improved upon his starting spot.

On paper, Moffitt looks like the favorite. He has four wins, three poles, he is led the second-most laps among Truck Series regulars, and for the second year in a row he grew a playoff mustache.

One of my favorite parts about sports is they do not play the games on paper. Of the Championship 4 drivers, Moffitt has completed the fewest laps with the least amount of lead-lap finishes. Another factoid to note is he won two out of three races in the summer and then back-to-back races to start the playoffs. So, Moffitt has not won in four races. If his wins came in spurts, has his run at the top ended?

I think Brett Moffitt will win the championship. One reason I think he will win is GMS Racing. The team is associated with both Niece Motorsports and Halmar Friesen Racing. While GMS Racing has been helping those two teams, I expect them to save their best stuff for Moffitt. I think he bests Chastain and Friesen for the victory and those three beat Crafton.

Who do you think will win the Truck Series championship at Homestead-Miami Speedway? Tell us in the comments below. We will all find out Friday night (Nov. 15) in the Ford EcoBoost 200 at 8 p.m. ET with TV coverage provided by Fox Sports 1.