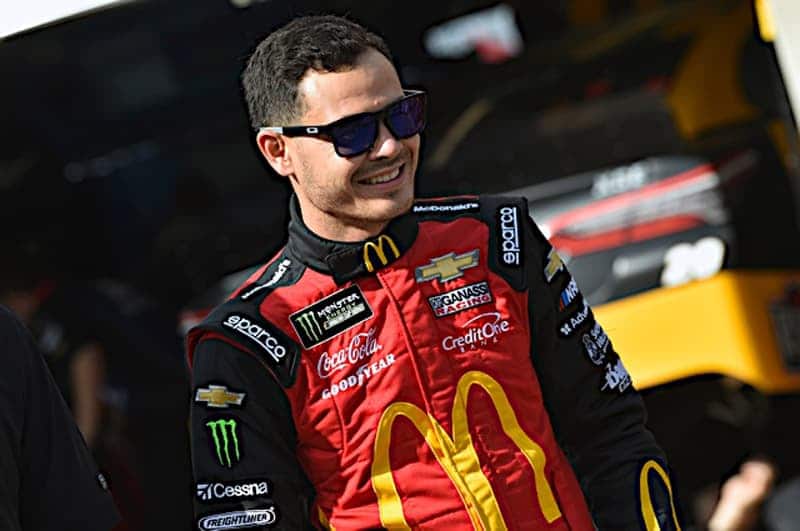 It’s the end of an era this weekend as the Monster Energy NASCAR Cup Series heads to Homestead-Miami Speedway. The Ford EcoBoost 400 will begin shortly after 3 p.m. ET on Sunday, Nov. 17.

Not only is this the 2019 Cup Series season finale, but it’s also the last time Homestead will host the season-ending events. Next year, the championship race will be held at ISM Raceway in Phoenix, Ariz. After last week’s snoozefest at the desert track (except the last few laps) one can only hope for different results in 2020.

Though the Cup Series only runs at Homestead once a year, drivers are still familiar with the track’s features. It’s a 1.5-mile oval with similar progressive banking to Las Vegas Motor Speedway and Kansas Speedway.

Sunday’s event will be 267 laps, which leaves lots of bonus points available for laps led and fastest laps. In prior races at Homestead, a few drivers led over 100 (and one close to 200!) If a driver leads a lot of laps, then they don’t exactly need to finish in the top 10 to rack up some DraftKings points. An example of this trend came at Kansas Speedway in October, where Kyle Larson started fifth, led 60 laps, and finished 14th. He was still able to score 59 DraftKings points, thanks in part to his 45 fastest laps.

One more notable detail about Homestead is that a driver in the Championship 4 has won each of the last five years. Additionally, the runner-up was in title contention in four of the past five events. Finally, in the 2018 Ford EcoBoost 400, all four championship drivers took the top four positions. However, remember that in NASCAR, things can change in a hurry. All it takes is one flat tire to send drivers out of the running for the trophy.

Before I continue on with this week’s picks, I want to review last week’s results from ISM.

So things were looking OK at first, as Aric Almirola and John Hunter Nemechek were both holding their own. However, it was extremely hard to pass at ISM as several cars were lapped early on. Then, both Almirola and Nemechek encountered late-race trouble and didn’t finish as high as they could have. Of course, the biggest piece missing from this lineup wound up being winner Denny Hamlin: he scored 134 DraftKings points.

The minimum score needed to profit in the Daily Dollar tournament was 288 DraftKings points. Also, in a $1 Double Up, 261.25 was the lowest score in the green.

Harvick is again competing for a championship because of his victory at Texas Motor Speedway. These last few races have been held at some of his best tracks; Homestead-Miami Speedway is no different. He has more top-10 finishes there than anyone else, still building on a top-10 streak that began way back in 2008! Eight of those were top-five finishes, including each of the past five races. Statistically, he’s definitely the one to beat entering the weekend.

However, in many of this year’s playoff races, the Stewart-Haas Racing Ford driver scored 50-67 DraftKings points. Even though he completed all the races except one in the top 10, he didn’t lead enough laps to pay off his price tag. Thankfully, two of the races in which he led laps were at 1.5-mile tracks. Due to inclement weather Friday, Saturday’s qualifying session was canceled, and drivers will start based on their position in owner’s points. This result puts Harvick on the front row alongside Hamlin, which does make him a bit more risky of a play.

Still, Harvick will have a great chance to lead some laps, so he’s still a good choice. You can never go wrong with the race winner, right?

Truex, who will start third Sunday, won three times in this year’s playoffs. One of those came at Las Vegas in which he led 32 laps and earned 93 DraftKings points. He’s won seven races so far this season and has earned an average finish of about 10th place.

Truex has finished first and second the last two years at Homestead.  In his 2017 championship campaign driving the No. 78 car, he led 78 circuits in this race while recording 19 fastest laps.

If Truex can stay out of trouble like he has so far this year, he would score very well on DraftKings.

Initially, I had wanted a more balanced lineup of drivers. However, I just couldn’t ignore some key pieces of Larson’s history at Homestead. He’s led 322 laps in the last three years, with the bulk of those laps in 2016-2017. Even though he has never won at the track (yet), as I noted earlier, the Chip Ganassi Racing driver would still score well if he again leads laps.

Larson’s success at Homestead could certainly be because of his driving style, as he tends to run the high line against the wall. That’s what a driver often needs to do at a place like Homestead, so even though Larson’s expensive, he could still be worth it.

Buescher has been featured in this column many times this year, and for good reason. He’s a low-price play that often finishes well ahead of where he starts. The JTG Daugherty Racing driver should have no trouble performing well again, starting a solid 20th in the finale. Even though he hasn’t ended a race higher than 20th at Homestead, Buescher has set new career highs several times this year. Buescher was also on a long streak of top-20 finishes until Richmond Raceway’s event. He’s a near-lock for my lineup.

Like Buescher, Dillon has finished several spots higher in many races this season. Just last week at ISM, he earned nine spots on the track, which gave him 34 DraftKings points for a 20th-place finish. In addition, the Germain Racing driver finished 22nd after starting 31st in last year’s event at Homestead. That’s really all you need from a guy at his price point.

LaJoie is here for one main reason: he’s cheap! So far this season, Lajoie’s done fairly well in not producing a negative DraftKings score. He also has some very high upside in which he scored as high as 65 in the playoffs (at Talladega Superspeedway).

Most notably, Lajoie scored 44 DraftKings points at Martinsville Speedway with underdog team Go FAS Racing. Hopefully, he can race clean Sunday and earn some positions on the racetrack.