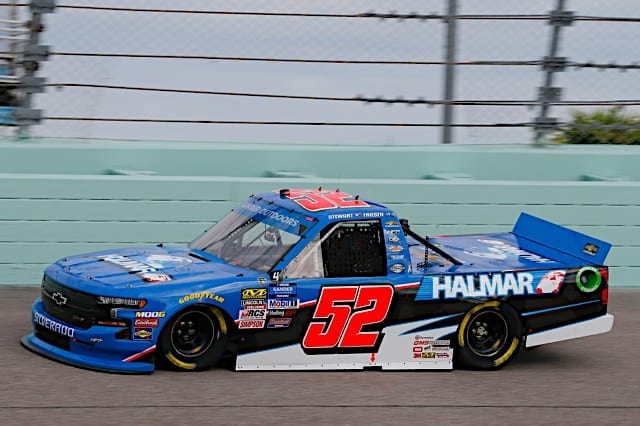 Heavy rains and lightning in the vicinity of Homestead-Miami Speedway forced NASCAR to cancel qualifying for Friday night’s Ford EcoBoost 200. As a result, NASCAR will set the field via owner’s points and practice speeds.

Stewart Friesen, by virtue of his win last weekend at ISM Raceway, will start on the pole for the 200-mile season finale. Brett Moffitt will be alongside. Christian Eckes will be third on the grid by virtue of Kyle Busch Motorsports’ No. 51 being in the Owners’ Championship 4 in place of ThorSport Racing’s No. 88. Ross Chastain will start fourth, followed by Matt Crafton.

The field has been set using the following format: The top 25 teams in owners’ points, the fastest two drivers in combined practice from Friday morning, then the remaining five spots will be the next five in owners’ points. FOX Sports’ Bob Pockrass reported that Josh Reaume withdrew the No. 34 Toyota.  Reaume’s No. 34 is 24th in owners’ points, which would opened up