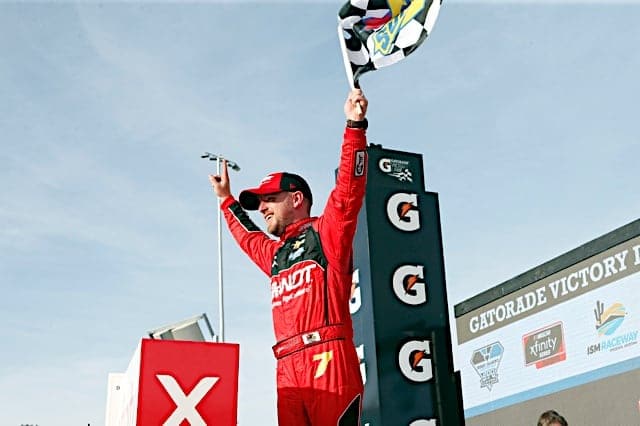 Justin Allgaier enters this Saturday’s (Nov. 16) NASCAR Xfinity Series finale with the most momentum, having won last week at ISM Raceway to advance to the Championship 4.

Allgaier likely would have qualified for the Championship 4 regardless of the win, but the victory was still huge, as it was the Illinois native’s first win of 2019.

“We didn’t have to win last week. It obviously was a good thing we did,” Allgaier said. “We knew we needed to keep the other guys behind us in points from winning. If we win, there’s no way they can win, right?

“It really hit me when we got here, you see the board outside, the wins column, the sticker. At least there’s a sticker up there, right? I feel like it would be really difficult to come in here and say, ‘We got a shot at going for a championship when we didn’t execute well enough in the regular season to get a win.'”

Allgaier ended a 39-race winless streak, which is surprising given he won five races last season. Despite not winning until last week, Allgaier has his best career average finish this year, averaging 8.9 in his ninth full-time Xfinity season.

“This year based on numbers alone, it’s probably my best season I’ve ever had,” Allgaier said. “It’s just crazy how your mind can kind of jumble things up. If you’re not going to Victory Lane, you always feel like it’s not as successful as you want it to be.

“I think perspective for me has changed a lot in the last four or five weeks. I’m just happy to be competing for a championship.”

The big difference between this year and previous ones was that Allgaier had never before won a playoff race despite winning 11 times in his career so far.

If you’re going to peak, winning the final race before the championship round. I mean, really the playoffs, the stats of the playoffs for us, 3.6 average finish for six races, I mean, I’ll take that all day long,” Allgaier said.

The 33-year-old enters this weekend somewhat as an underdog, as the big talk of this season has been the Big 3 of Christopher Bell, Tyler Reddick and Cole Custer.

“You look at Joey [Logano] last year, Tyler [Reddick] last year, they weren’t the guaranteed favorite to win,” Allgaier said. “I don’t even think Joey, anybody looked at him and said, ‘I think Joey is going to win the championship.’ He did that and then some. He absolutely obliterated the rest of the field.

“Whether that happens or not, I mean, I think it’s been fun. I’ll be honest with you, I think it’s fun to be that guy that could spoil the party. You want to be the guy that can shake things up. We’re not the favorite to win. I’m okay with that. I’m going to go out there and like I said earlier, be at 100%. You can’t do any more.”

Allgaier said he would be satisfied if Bell and Custer moved to the Monster Energy NASCAR Cup Series having never won the Xfinity title and Reddick only winning once due to the No. 7 beating them this weekend.

“I mean, on the flipside of it, any of those three guys that are racing on Saturday against us, if anybody were to win the title, those three guys have put in the work, they’ve put in the effort, mastered their craft masterfully,” Allgaier said. “If they win, hats off to them. This season has been extremely tough. To see the amount of victories they’ve all accumulated, it’s been pretty impressive.

“Regardless of what happens, there’s only going to be one of us that walks away with this. Obviously, I want it to be me. There’s not anybody in this final four that you can count out. Everybody has done a great job this season. It’s going to be fun to see who pulls it off.”

“I’m not quite 10 years, but nine years older than all of them,” Allgaier said about next year’s three Cup rookies that he’s battling for the title this weekend. “Yeah, that means I’m old (laughter). I’m okay. I’m good with it. What’s the average age in the Cup Series [playoffs] this year, 36, 38?  I’m still good.”