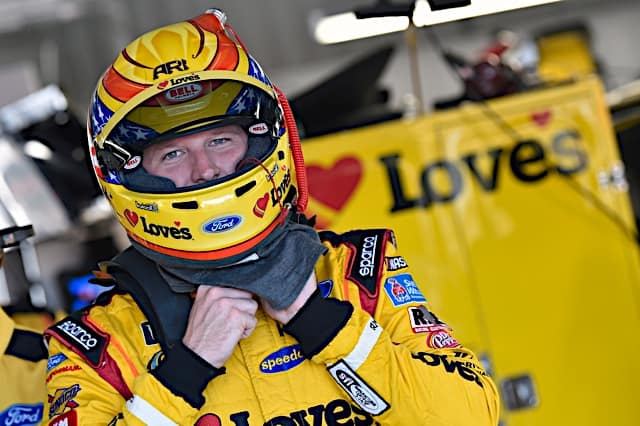 In a tumultuous year for Front Row Motorsports in the Monster Energy NASCAR Cup Series, at least one of its drivers should remain intact. Michael McDowell confirmed to Frontstretch Friday (Nov. 15) at Homestead-Miami Speedway that he expects to return to FRM in 2020.

“We’re still hammering out the details, but I think I will be back at Front Row driving the No. 34 Love’s car,” McDowell tells Frontstretch. “There’s obviously a lot of stuff happening in our sport right now. This sport is driven by sponsorship, so if somebody has more sponsorship, teams have to look at it, and that’s just part of the business.

“It’s an unfortunate part for me because I’m not able to bring financial support to the race team. But I feel like I have done a good job and everybody is happy. You know, you’re always dodging bullets on who can bring the next check and take your ride. [But] I feel like I am in a good spot, we have good partners and hopefully, we can get everything finalized.”

McDowell joined FRM following the 2017 season. During his time at FRM, he’s tallied two top fives and three top-10 finishes, the most for any FRM driver during that stretch. In particular, he’s excelled on the superspeedway tracks, where he’s earned seven of eight career top-10 finishes. McDowell was one of the survivors in this year’s chaotic Daytona 500 and was contending for the victory before winding up fifth.

McDowell is particularly excited about the organization’s qualifying efforts in 2019. He’s earned two top-10 starting spots in the final 10 races of the season, including a career-best fifth at Martinsville Speedway. However, some technical issues hurt him from turning impressive one-lap runs into full-race results, a problem that’s caused FRM to change direction in recent weeks.

“We had extremely fast cars in qualifying but they didn’t race very well,” McDowell says. “We knew we’d have to go back to the drawing board and build some more downforce in the cars. Obviously, that hurt the raw speed but helped some of the race performance.

“We haven’t really gotten the chance to show that. At Texas [Motor Speedway], we had a really fast car, were running good and had an oil line clamp break and had to go behind the wall. At Phoenix (ISM Raceway), we had a couple of blown right-front tires. We haven’t really been able to show our performance since we’ve done a little bit of a shake-up with how we’re building the cars, but I feel like we’re going in the right direction.”

FRM is still working on rounding out its driver lineup for 2020. David Ragan is retiring from full-time competition at the end of the season, while Matt Tifft has left the team after a seizure suffered at Martinsville last month.