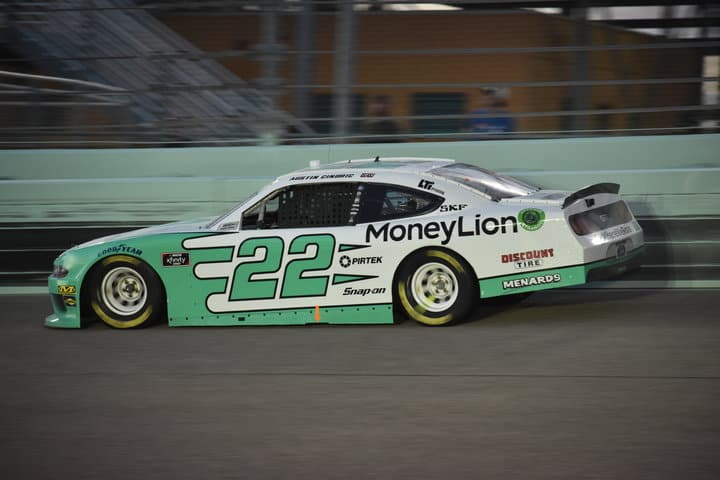 For Team Penske’s Austin Cindric, Saturday was a day to simply do the best he could.  Getting eliminated from the playoffs at ISM Raceway meant that he entered Homestead tied for fifth in points with Stewart-Haas Racing’s Chase Briscoe.  The goal for Saturday was simply to outscore Briscoe.

Early on, it appeared that he was going to be able to do that. Cindric snagged the lead away from Briscoe on lap 54 and led for a total of 39 consecutive laps.  That was enough to give him the stage two victory and the 10 all-important stage points that came with it.

Ultimately, Cindric led a total of 40 laps Saturday.  It’s the most laps that he’s led in an oval race this season and his second-most laps ever led on an oval.

“It was up and down tonight,” Cindric told Frontstretch after the race.  “I definitely felt that my preferred lane was going to go away as the run [continued] on.  We tried to make some adjustments to deal with that, but it just wasn’t enough.

“I think that if we would have had [more] practice, we probably would have been able to work on some of the [handling] characteristics that I was fighting.  Then again, everyone else was in the same boat.  I just wish that we could have been up there fighting for the lead.”

Despite winning stage two and running in the top 10 all race long, that was not enough to allow Cindric to finish fifth.  Despite contact with the wall and a cut tire, Briscoe was able to recover to finish third and score 50 points to Cindric’s 42.  As a result, Cindric will be credited with a sixth-place finish in the Xfinity Series point standings.

For 2020, Cindric probably has the most solid plans of anyone currently in the Xfinity Series.  He’ll be back in the No. 22 MoneyLion Ford full-time.  With Christopher Bell, Cole Custer and Tyler Reddick all moving to Cup full-time next season, he’s likely to be one of the str0ngest drivers in the running for the Xfinity title.