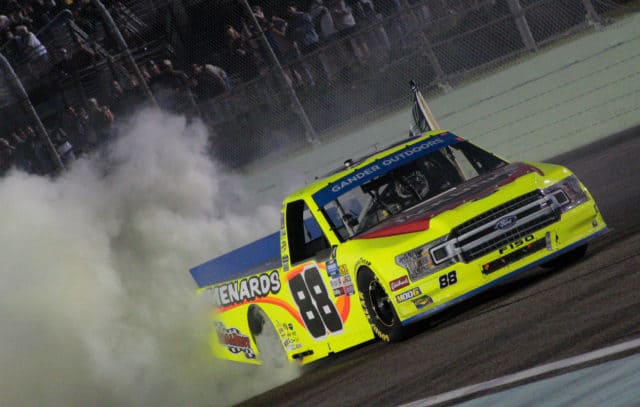 Hattori Racing Enterprises’ Austin Hill took advantage of slightly fresher tires on the final run of the race to run down Matt Crafton and take the lead with 23 laps to go.  From there, Hill opened up a gap and held on to take his fourth win of 2019.  However, Crafton kept Hill in sight and brought his Menards Toyota home in second.  That was good enough to give Crafton his third NASCAR Gander Outdoors Truck Series championship.

“It feels amazing,” Crafton said after the race.  “It’s one step closer to what [Ron] Hornaday has done, and they called us the underdog.  I heard [Todd] Bodine and everybody say I was the underdog and I didn’t have it and we fought harder.

“This Menards [Ford] F-150 was fast tonight,” he continued.  “The first run, I’m like, ‘oh boy, we’re in trouble,’ and just made air pressure adjustments from there.  We made a few adjustments, tightened up, because we thought the track was going to be green, and it was going to go away, but this thing ran flawless all night.  And motor was very good, as well, and everything just went our way.”

Following a 90-minute rain delay, Stewart Friesen led the field to green. But that lead was very short-lived as Ross Chastain immediately put the pressure on. In turn 3 on the first lap, Chastain dove to the inside and took the lead away.  Despite the easy pass, Chastain was not able to get away.  The two playoff contenders opened up nearly three seconds on the rest of the field.

Once Hill’s tires came in, he started rapidly running Chastain and Friesen down.  With just a couple of laps remaining in stage one, Hill ran down Chastain and made the pass for the lead.  That gave Hill the stage victory.  He then immediately gave up the advantage due to getting blocked on pit road.

Brett Moffitt won the race off pit road, but fell victim to the same exact move that Friesen did.  Chastain got past for the lead, but Moffitt charged back up to Chastain’s bumper.  Meanwhile, it didn’t take long for Hill to get back to the front.  Eight laps after the restart, Hill had climbed back into the top spot and held on to win stage two.

A split pit sequence due to a lap 51 caution due to smoke and fluid on track from Ray Ciccarelli‘s No. 49 saw Christian Eckes move to the front after stage two on slightly worn tires.   Despite having six more green-flag laps on his tires, Eckes was able to more than hold his own entering the final stage.  Meanwhile, Hill charged up through the field and eventually got himself back to second.

The race came down to the final round of green flag stops.  Eckes, who had pitted 10 laps prior to the other leaders, stopped first.  Hill managed to stay out for an additional nine laps before making his final stop.  That gave him a slight tire wear advantage over the rest of the pack.

Among the championship contenders, Friesen ended up getting balked by Angela Ruch while entering his pit.  That cost him a significant amount of time, but a lack of long run speed doomed any changes for Friesen to win.  He would eventually finish 11th, nearly 20 seconds out of the lead.

Hill’s margin of victory was 1.569 seconds over Crafton.  Eckes ended up third, which was good enough to give Kyle Busch Motorsports the 2019 Gander Outdoors Truck Series owner’s championship.  Chastain finished fourth, while Moffitt was fifth.

Johnny Sauter finished sixth in his Tenda Heal Ford, followed by Grant Enfinger.  Todd Gilliland was eighth, while Sheldon Creed was ninth.  Parker Kligerman finished 10th after starting 27th.  He only managed to get into the race after qualifying was canceled due to a quick lap in practice Friday morning.

STEWART FRIESEN COMES UP SHORT: ‘WE JUST DIDN’T HAVE A CHANCE’

An I correct that Crafton didn’t win a race this year? I’m thrilled that he won his 3rd title, and that he proved that ;win and you’re in’ doesn’t guarantee a thing. Congratulations to the entire team. Well done!

Spin this one Nascar, ZERO wins gets Championship one race shootout farce. I’m happy for Matt and team.

Didn’t Austin Dillon win the Nationwide/Xfinity championship without winning a race? Anyway, Congratulations to Matt and Thor Sports, and at least one Ford winning a championship.

What? How can a driver that didn’t win a race be a champion? NASCAR must revise the system again to ensure this never happens again!! Come on gentlemen, Harrumph!!

Also, where is the article dedicated to Matt’s Championship win? I see an article each for the 3 losers, and only this one that is more of an overall recap of the race. Seems a bit disrespectful to me, or am I just being over sensitive in my triggered outrage at this slight?

Congrats Matt! Way to spoil the ball and score one for us old guys!