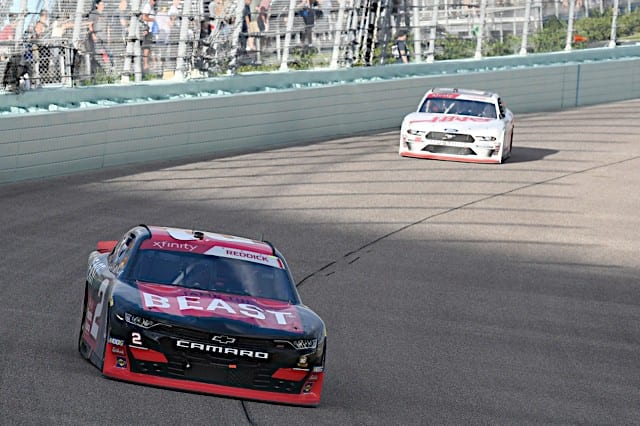 Entering the NASCAR Xfinity Series championship race at Homestead-Miami Speedway, Cole Custer, Tyler Reddick and Christopher Bell shared the role of co-favorites. After all, they were this year’s “Big 3.” Down the stretch, Custer appeared to be in position to edge out his rivals but an incredible comeback performance fell just short.

At the start of the race, it was Reddick and Custer who controlled the event. Then, a lap 32 caution for debris getting stuck in the concrete wall switched up some strategy a bit. The No. 2 of Reddick and Custer chose to pit while their competition, Bell and Justin Allgaier, stayed out.

It turned out to be a smart decision. Rocketing through the field on the restart, Custer charged from the back half of the teens to finish second in the stage one. He only fell behind Stewart-Haas Racing teammate Chase Briscoe in the running order as the championship appeared within his grasp.

But stage two is where the race changed for the No. 00 team.

On lap 59, Custer made an unscheduled pit stop for a loose right-rear wheel. The No. 00 Ford went one-and-a-half laps down, and it took him all the way until the backstretch of the final lap of that stage to get his lap back. A late surge past Austin Cindric allowed him to get back in the game.

Overall, that could have been the savior for Custer’s race. He didn’t have to take the wave around and restart on old tires.

“There’s nothing you can really change about it,” Custer said of the loose wheel. “You take it how it is and make it the best you could. It worked out good because we were able to get our lap back and race our way up through there. Freaking out is not going to help out so you might as well try and take your lumps and move on.”

At the beginning of the final stage, Custer restarted 14th and started rocketing through the field. Over the final half of the race, Bell, Reddick and Custer were battling back and forth, going punch-for-punch even during a cycle of green flag pit stops.

Custer wound up surging in front, taking the point for the first time on lap 167. But Reddick was right on his tail and with less than 20 laps to go, he threw a slide job on Custer for the lead. The No. 2 Chevrolet then drove away, earning Reddick his second consecutive championship while for the second straight season, Custer finished second in points.

“I could match his lap times up there — I studied his in-car all the way coming here, trying to figure out how to run the top better, and I got close,” Custer said. “I tried to to find a way to close the gap when I was behind him and I probably tried a little too hard and got in the fence. Tyler [Reddick] can rip the fence here.

“We’ve had an unbelievable year. It sucks to come home second two years in a row, but we’ll take it. We were a lot closer this year. … It was a cool race, the three of us were close for a while.”

Ultimately, Custer knew if Reddick got by, the No. 2 would likely drive away. It’s why he threw a slide job the following set of corners, noting that it’s harder to throw a slide job in turns 3 and 4, which is where he had to make his move.

“That was my only option at that point,” he said. “It’s a lot easier to do a slide job in [turns] 1 and 2, and I knew I was at a disadvantage, but I had to do it anyways. … It gets really slick in the middle of 3 and 4, so you’re not able to catch yourself as good when you run up the racetrack.”

Earlier this week, Stewart-Haas Racing announced Custer as the next driver of the No. 41 Ford in the Monster Energy Cup Series, replacing Daniel Suarez. The California native closes out his full-time NXS career with finishes of fifth, second and second in points.