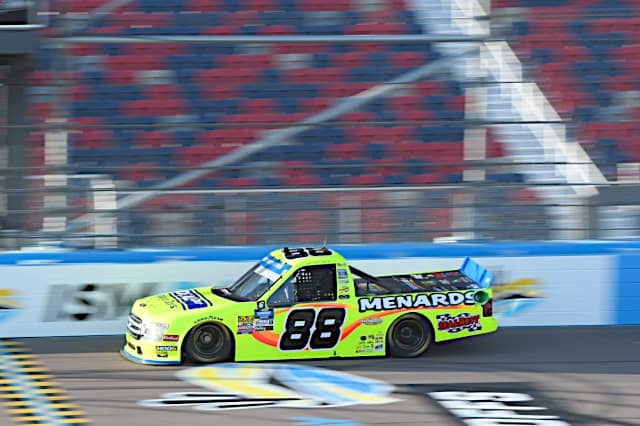 In a Nutshell: Austin Hill placed the perfect bookend on his 2019 NASCAR Gander Outdoor Truck Series season by cruising to victory in the Homestead-Miami Speedway season finale. His Ford 200 trophy earned Friday night (Nov. 15) matched up perfectly with a victory in the season opener at Daytona International Speedway.

Unfortunately for Hill, though, he was no longer a title contender. Matt Crafton, by virtue of a second-place finish, became the first winless champion in Truck Series history. Crafton secured the third championship of his GOTS career and the third for Thorsport Racing, an ownership record.

Unfortunately for Thorsport, they didn’t make the owner’s Championship 4. Christian Eckes produced a third-place finish for Kyle Busch Motorsports to earn that title for the No. 51 team and crew chief Rudy Fugle. It’s KBM’s sixth owner’s trophy in the past seven seasons and produced a rare Championship 4 trifecta under this format: the race winner, driver’s championship and owner’s championship were all different.

Title contenders Ross Chastain and Brett Moffitt rounded out the top-five finishers. Tyler Ankrum finished a disappointing 22nd but that was still more than enough to clinch Truck Series Rookie of the Year.

Who Should Have Won: Hill. The Hattori Racing Enterprises Toyota had a lights-out setup for this Homestead track a second straight year. Even when falling through the field after a slow pit stop, Hill climbed back and seemed to have the only truck capable of passing with ease. Taking the lead for the final time on lap 112, he led 56 of 134 laps as his team has this 1.5-mile oval figured out.

“I think we just look at this racetrack a little bit differently and did whatever we had to do to duplicate what we did last year,” Hill’s crew chief, Scott Zipadelli, said after the race. “In practice, we changed some setup things so we were able to do what we did last year. Austin came with his A game, and everybody on the team, we worked very late all week last week, this week, preparing to come here.  We wanted to come here and make a statement, and everything was executed perfectly from the time we left to sitting here right now.”

Crafton’s third title is easily his most surprising. The 43-year-old veteran hasn’t won a race since Eldora Speedway in July 2017 and had gone 13 straight races without a top-five finish. His team, Thorsport Racing, struggled with Ilmor engines throughout a postseason that saw two of Crafton’s teammates, Grant Enfinger and Johnny Sauter, eliminated after the Round of 8.

It’s a year where Crafton led just 44 laps, the fewest of any Truck Series champion in history. That’s his lowest total since 2010 and it came despite earning three pole positions, his most since 2015. He posted just three top-10 finishes in six playoff races and led just a single lap before pushing out front for nine more during the championship finale.

So how did the No. 88 team navigate through it all? First off, Crafton benefitted from his teammate’s engine failures in the Round of 8. Only two drivers get eliminated and it’s easy to squeak by when your two teammates are also sitting in the garage. Then, in a weakened Round of 6, Crafton had to beat just two other drivers to advance.

It really came down to a battle between him, Hill and Tyler Ankrum after all three experienced problems at Martinsville Speedway. Crafton was actually nine points out looking in on the Championship 4 heading into the ISM Raceway semifinal.

But it’s there Thorsport hit its stride, putting all four of its teams inside the top eight, including Crafton. That was enough to bypass Hill (13th) and an inexperienced Ankrum. From there, it was simply a veteran maximizing his speed and making the most of an opportunity.

“When they said without winning a race, winning the championship, you know what, I’m going to sleep really good all winter long with this trophy,” Crafton said. He also referred to several reporters as “negative” when bringing up questions surrounding a winless a champion. “When you win a race, that’s very sweet, but usually you only have one week, like four or five days to gloat about it, but I think I’ve got like two and a half months to gloat about this championship before next year.  We all do.”

Certainly, it’s not an ideal situation for a sanctioning body that trumpets winning with this new format. But Crafton slid through in a bizarre Truck season in which some of his typical rivals (Kyle Busch Motorsports, Thorsport teammates) didn’t make the playoffs or got eliminated early. Chastain and Moffitt had better seasons, certainly but it only takes one bad day to falter in a winner-take-all finale.

Finally, take a look at Crafton’s stats in his three championship seasons. (The other two were won without a playoff).

These stats remain in range of what he’s accomplished, in particular a 2013 season where consistency, not victories helped clinch the title. A Truck Series version of Terry Labonte, Crafton doesn’t tear up equipment, maximizes finishes and knows how to work through the points format.

This time, it gave him an unlikely third title. And now Ron Hornaday Jr.’s record of four appears within reach.

Nine months ago, after his victory at Daytona I believed Hill could be a one-hit wonder, someone with mediocre results in subpar equipment who benefitted from the unlikely departure of reigning champion Moffitt.

I’ll be the first to line up and admit I was dead wrong. Not only has Hill been humble and hard-working in his rise up the Truck Series ranks this season, he’s exceeded even his own personal expectations with four victories. Only Kyle Busch had more in 2019 as Hill led an impressive 209 laps to go along with it. Not bad for a guy who had 29 laps led and just one top-five finish in 51 career Truck starts entering the year.

“I’ve always said growing up that I wanted to get a chance to be in good equipment just to see what I could do,” Hill said after the race. ” See if I could compete at the highest level and win races and race against all these guys.  I’ve always had a good amount of confidence in myself.

“I did feel like I could win races, and I kind of had a little checklist at the start of the season, and one of those checklists was just to win a race.  It wasn’t to go light the world on fire and win 10 races, it was just to win a race.  We checked that off early, and then the next boxes that I wanted to check off was obviously make it to the Round of 6 and just make it to the Round of 4 and give ourselves a chance.  And that was the only box I didn’t get to check off throughout this season.”

Chances are Hill will get to check that final box in 2020 as his race team returns virtually intact. HRE will be a forced to reckon with once again from the moment Hill goes to defend his Daytona victory in February.

Chastain entered Homestead a Cinderella story, climbing into championship contention midway through the year after not even having a full-time ride to start the season. His three race wins with Niece Motorsports gave hope to new ownership entering the sport and hard-working underdogs they could still accomplish great things.

But their season finale performance ultimately came up short. The short-run speed just wasn’t there for the No. 45 truck and Crafton scooted away before they could recover.

“We wrote a new story,” Chastain said. “It hasn’t been done.  Proud of the effort all year.  That was about four nights of the scariest time of my life of thinking of switching points, because it had not been done before, never on purpose and never with this mentality that you’re going to go win a championship.  It’s pretty crazy that we did that and that we made it to Homestead.”

Chastain will move on to Kaulig Racing next year in the NASCAR Xfinity Series but will continue to drive a limited schedule for Niece. Not a bad recovery for a guy whose plan with Chip Ganassi Racing went up in smoke last December, right?

Meanwhile, Moffitt and GMS Racing felt almost overconfident on the radio from the start. A racetrack and setup they felt would come to them never really did as Crafton scooted away in clean air. They also seemed overly concerned with Chastain at one point while not fully recognizing the threat of the No. 88 until it was too late.

Long back-and-forth as to what line to choose on the restart.

"I'm just worried about the 45 jackin' us up, you know… pulling a Carl Edwards on us" – Moffitt radio

“We struggled to take off too much,” Moffitt said. “The gap that the 88 opened up, you weren’t going to overcome that. We just couldn’t fire off and run pace, and we couldn’t run the bottom.”

Just like that, arguably the best team over the course of 2019 watched Moffitt’s shot at back-to-back titles slip away. GMS Racing will be back in 2020, filled with young talent in Moffitt, Sheldon Creed and Ankrum. But as the favorite, Friday night felt like a missed opportunity.

ALBINO: SO CLOSE, YET SO FAR FOR ROSS CHASTAIN

.@FrontRowJoe87 now has the most ever #NASCAR national series starts under his belt. ??

Last week, Joe and his son @JHNemechek became the 1st father/son duo to race in all 3 national series events in 1 wknd. pic.twitter.com/ysXGQZMESu

In just their third race of the year, @pkligerman and @HendersonMotor1 scored a top 10 at @HomesteadMiami . Our @m_massie22 caught up with him after the race pic.twitter.com/SiYrMsTE5s

Number of ROTY Candidates in the Race: 6

Number of Rookies finishing in the Top 10: 1 (Sheldon Creed, 9th)

Rookie of the Year: Tyler Ankrum. This one was never really close as Ankrum was the only rookie in this group to qualify for the postseason or win a race. Moving on to GMS Racing for 2020, he took time after Homestead to thank his current DGR-Crosley team for all they’ve done.

“It’s been a long time since I’ve gone anywhere else other than DGR,” Ankrum said. “I think David Gilliland got me started me in the late model, K&N car and the truck, got the K&N East championship last year with David, and got a win.  For some odd reason, he’s always seen something in me.  So, you know, I pretty much owe everything to him for everything that I’ve done so far.  And actually, what he’s done has allowed me to go on and move on with a team like GMS.”

Points Update: Crafton earned the title over Chastain, Moffitt and Friesen. Hill was the best driver outside the Championship 4.

Up Next: Happy 2018 offseason! The Trucks take a two-and-a-half month break until Daytona in February.

The perfect irony of Crafton gaining the title without a win is delightful! Just loved that’ game 7′ moment. This proved that there are no guarantees the a race will be a barn burner. Makes it even more apparent that a playoff (of not REALLY a playoff in this case) for racing is a joke. Congratulations to Matt.